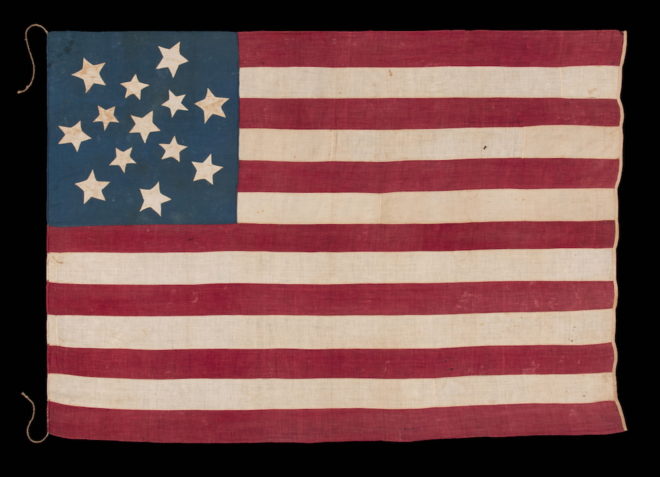 Two early American flags made in Philadelphia have found their way back to the city as part of an exhibition of 13 star flags at the Museum of the American Revolution. The landmark display, A New Constellation: A Collection of 13 Star Flags, features 40 flags dating from throughout the 1800s. The exhibition was developed by renowned antique flag dealer, Jeff R. Bridgman.

The collection of carefully framed flags spans the 19th century and range in size, design, and fabric–details that were determined by the hands of the flag maker. The largest flag stretches to more than 12 feet in width, while the smallest is a 3-inch hand flag, a remnant from the 1876 Centennial. There are several flags with advertising imagery as well as an 1860 Abraham Lincoln flag used during his campaign, featuring his beardless face. Sharing the commonality of 13 stars, one for each of the early colonies, it is the first time a collection this size of 13 star flags has been exhibited together.

“There was no official star pattern until 1912, so they can be in any sort of configuration in terms of the stars, number of points on the stars, shades of red and blue, and proportions,” noted Bridgman. “The original legislation just called for 13 stars, a new constellation, and 13 stripes alternating red and white. There are probably at least 80 known patterns. I have 32 different star patterns within the 40 flags exhibited.”

Leading the exhibit are two flags with direct ties to Betsy Ross. One was made by her granddaughter, Rachel Albright, and the other by her great-granddaughter, Sarah Wilson. The flags were made in the East Wing of Independence Hall and sold to tourists at the turn of the last century. While Ross is credited for making the first flag, Bridgman noted the 13 star circular wreath design was more than likely not hers.

“It’s family folklore and is what went into our history books. People learned about Betsy Ross and that the stars were configured in that perfect circle design. Really, that wasn’t the case. She may have made the first flag, but she almost certainly didn’t design it. Whoever did, it was done here in Philadelphia.”

Bridgman, the largest American flag dealer in the country, has been in the antiques business for 30 years. Based in York County between Gettysburg and Harrisburg, he has had a relationship with the museum for years. When he was approached about doing a flag exhibit, he knew his collection of 13 star flags should be the focus.

Jeff Bridgman, the largest American flag dealer in the country, stands among his rare collection of 13 star flags on display. | Image courtesy of the Museum of the American Revolution

“It’s fair to say it is the largest and best collection of these types of flags. I’m honored to be able to bring them here. It’s a privilege to be able to see them in one room,” said Bridgman.

“These historic 13 star flags span a period from the lifetime of the Founding Fathers to that of our own grandparents. They remind us that the past is not so very distant and that the revolutionary ideas, aspirations and symbols from our nation’s birth remain as relevant today as they ever were,” said Dr. R. Scott Stephenson, museum president and CEO.

Throughout the years, Bridgman has explored every avenue possible to acquire flags including collectors, dealers, pickers, auctions, estates, and historical societies. People also bring flags to him. With his keen interest in 13 star flags specifically, he has owned 750 of them in different forms, including some of the best ones known to exist. He currently keeps 2,500 flags in stock and has exhibited at 1,400 antique shows. As Bridgman began assembling his collection for the current exhibit, he realized its enormous significance.

“This display is extremely rare. In the history of America, there has never been a large-scale exhibit of 13 star flags. Even with all the different types of exhibits I’ve done, I have never done one with just these flags. Nobody else has either,” he remarked.

“I’ve never heard of a collection like this,” said Tim O’Connor, owner of Humphrys Flag Company on Arch Street, one of the oldest manufacturers of custom flags in the United States. “These flags were so respected. They weren’t put in the attic. They were honored and taken good care of for 150 years. These flags are an integral part to the birth of the country.”

Understandably fragile after nearly 200 years, many of the flags were hand sewn and vary in materials like silk and cotton. Wool was commonly used for outdoor flags because of its durability and ability to shed water. Printed flags made for one day’s use were often cotton, as well as homemade flags. Sewing machines were mass marketed in 1855 and used by commercial flag makers during the Civil War. Bridgman, who has worked in textile preservation for two decades, has remained cognizant of temperature and humidity while storing the flags. 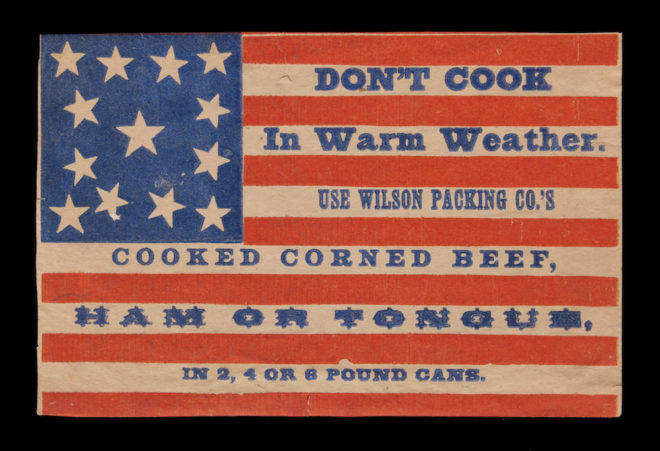 A 13 star flag advertising cooked corned beef adds a fun, eclectic touch to the exhibition. | Image courtesy of the Museum of the American Revolution

Although showing notable wear, frayed edges and patches of disintegration in some, not much restoration, other than cleaning, was necessary. Bridgman noted some flags were mounted with all of the loss showing, and about half have an underlay with different fabrics of the same coloration and weave to fill in what is missing.

“Flags were generally used outdoors, so they are judged on a different level. Some have much loss and wear. One has white stripes that practically don’t exist. It’s sort of a ghost of a flag, with just the blue canton stars and a portion of the red stripes. That is one of the most amazing, I think, in the exhibit,” Bridgman said.

Although most are from the 1800s, Bridgman suspects some flags could date to the 1700s. He noted the difficulty in gauging a flag made in 1790 compared to one from 1810 because there is “sadly, not enough that exists for us to make that division.”  The two youngest flags in the exhibit date from circa 1895 and 1920.

The Flag Act was passed in Philadelphia on June 14th, 1777 with the origins of the first American flag connected to Founding Father Francis Hopkinson who lived in Philadelphia. A signer of the Declaration of Independence, Hopkinson became a senator representing New Jersey. He also held an interest in heraldry and was an amateur artist.

A New Constellation: A Collection of 13 Star Flags is on view at the Museum of the American Revolution at 101 S. 3rd Street until July 21. See the museum’s website for admission and hours of operation: amrevmuseum.org