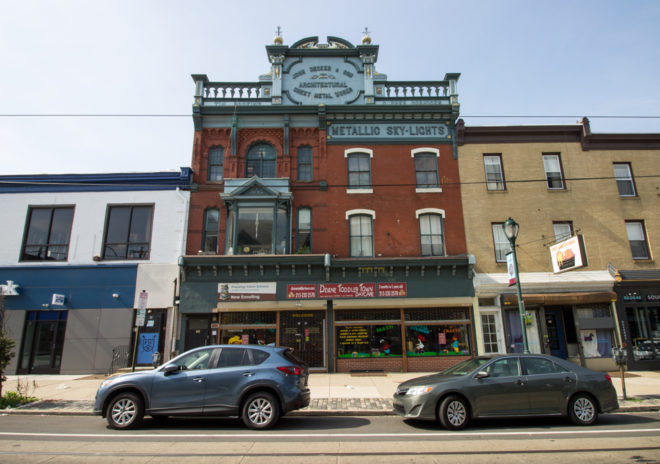 On Wednesday, June 19, the Philadelphia Historical Commission’s Committee on Historic Designation will review 12 nominations during their monthly public meeting at 1515 Arch Street, Room 18-029. All recommendations made will go before the full Commission in a future public hearing for possible historic designation. This month’s agenda is packed with some individual architectural knockouts, but there are also a number of carryovers from previous agendas including 156 W. School House Lane, Otis Elevator Company Boiler and Engine House at 1045-49 Sarah Street, and McMichael Park at 3201-45 Midvale Avenue. There are no historic district nominations planned for review at June’s meeting.

The Preservation Alliance for Greater Philadelphia has nominated the John Decker & Son at 2704-06 Girard Avenue in Brewerytown. The building, site of the former John Decker & Son Architectural Sheet Metal Works, was constructed in phases from 1875 to 1900, combining three brick masonry structures into one unified, high Victorian commercial design. The handsome amalgam’s focal point is, according to the nomination, a “monumental rooftop signboard and ornamental pressed metal parapet ensemble,” spanning the cornice line of the buildings. The authors of the nomination note that the building “survives today as a distinctive and evocative reminder of an industry that helped shape the architectural character of Philadelphia in the late 19th and early 20th centuries.” The property is recommended by Philadelphia Historical Commission (PHC) staff for designation.

The Philadelphia City Planning Commission submitted a nomination for the former Pennsylvania Railroad Young Men’s Christian Association at 4025-69 Westminster Avenue at the corner of 41st Street and Wesminster Avenue. Designed by architect Thomas Lonsdale in the Romanesque style, the structure was constructed 1893 and the building’s auditorium, a “partial octadecodon,” was added in 1896. The hefty ashlar stone compound features an eclectic mix of architectural detailing including towers, stepped parapeted gables and arched, circular, and semi-circular windows. The PHC staff supports the building’s designation.

Trinity Reformed Church at 1533-39 N. 7th Street, built 1869-72 has been nominated by The Keeping Society of Philadelphia.  This distinctive small urban church was designed by Philadelphia architect Samuel Sloan in the Gothic Revival style and was featured in The Architectural Review and American Builders’ Journal shortly after it was completed. The compact, Trenton brownstone-clad church stands tall at two and a half stories relative to its slight, rectangular footprint. Its graceful, elongated buttresses support three sides, integrated as decorative columns on the gabled front facade. The nominators describe the form as “expressive of the cultural, economic, and social heritage of Philadelphia’s working-to middle-class people of the period,” citing Sloan’s involvement in providing “economical, but tasteful, options for people of modest means.” The nomination is supported by PHC staff.

The massive Tacony Worsted Mills at 5250 Unruh Avenue is also up for recommendation, nominated by Alexander Balloon, director of the Tacony Community Development Corporation. The manufacturing complex consists of seven buildings, all built around the turn of the century, between 1886 and 1919, and was designed by Walter Harvey Geissinger, who was responsible for designing a number of large factories and industrial buildings in the city. Operations were discontinued in 1938 when the property was leased to Sears Roebuck & Company. Prior to its closure, the application states that Tacony Worsted Mills were a leading manufacturer of worsted mills worldwide, as well as one of the “largest” and “finest” worsted yarn mills in Philadelphia and the country. It is recommended by PHC staff for designation.

A small Italian bank building known as La Banca Calabrese at 638 Christian Street has been nominated by Celeste Morello for its contribution to the cultural economic and historical heritage of Philadelphia’s “Little Italy.” The former bank was one of a number of regulated and unregulated banks that served the immigrant population and comprised a small banking region of the neighborhood in the late 19th and early 20th centuries. The modest, three story blonde brick structure features a rounded corner and a large broken pediment at the entryway. It was once operated by Frank Bilotta, a builder and contractor who, according to the nomination, specialized in building and contracting services for the Italian immigrant community. It is recommended for designation by the PHC staff. 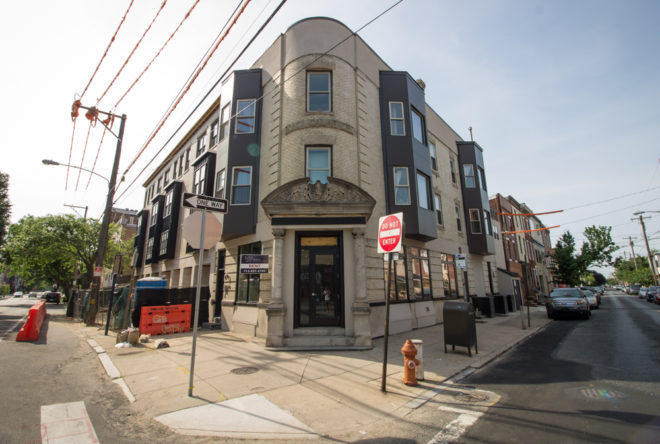 The Keeping Society of Philadelphia has nominated a late 19th century serpentine-clad twin with at 405 and 407 S. 42nd Street in Spruce Hill. The charming facade, with its polychromatic seafoam stone face and contrasting marble lintels, is a refreshing contrast to the ornate Victorian and Italianate twins that dominate the local architecture. The nomination is recommended by PHC staff for designation.

The staff of the PHC has nominated a set of handsome late Victorian twins at 1017 and 1019 Spruce Street.

The Alexander Henry House at 3460 W. School House Lane was also nominated by the Keeping Society of Philadelphia, although PHC staff notes that a campus master plan for Jefferson University, approved by an ordinance in 2016, includes the property in question and that “any designation of this property should account for the development of the property in compliance with the approved master plan.”