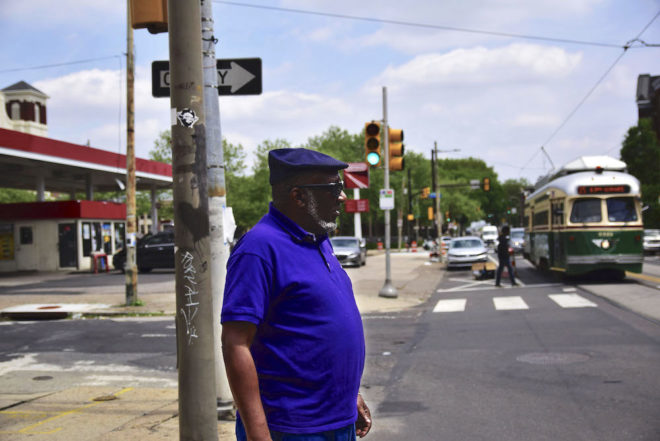 Larry Kane, a longtime resident and neighborhood fixture of Francisville, says reinvestment in North Philly has gone from peaceful to widespread displacement since 2009. | Photo: Richelle Kota

Larry Kane, 62, has many monikers. I know him as “Pops.” Others know him as “Karate.” Some call him “The Mayor of Girard Avenue.” No matter what his official title is, the residents of Francisville know the love and energy that he brings wherever he goes. It is easy to be captured by Kane by the way he talks, the humor he carries, and the stories he tells of a rapidly changing North Philadelphia.

On a normal day you can find him sitting on a metal stool by a large bay window at Kayuh Bicycles and Café. Kane is not employed by the shop, but he is quick to call out unsavory behavior, escorts people out who disrupt the peace, and is always happy to buy the bike staff takeout if they can’t catch a lunch break. He spends hours there, talking, joking, and watching out for the store and those that he affectionately calls members of his family. But the bike shop is not the main draw for Kane. It is more about the energy and camaraderie that one finds at the corner of 19th Street and Girard Avenue.

Kane was born in 1957 in North Philadelphia. He was raised on Cabot Street and Ridge Avenue. He has, for the most part, lived in the area ever since. He considers Girard Avenue home and says “you have to come right here to find me.” Kane has hung out and watched over the corner of 19th and Girard since 1979. He used to stand there with his friends when he worked at the pizza shop on the corner. He has long now makes his rounds, checking in with owners and keeping a watchful eye on their shops along the block. But today, when Kane walks around Francisville, he doesn’t recognize many of his neighbors. 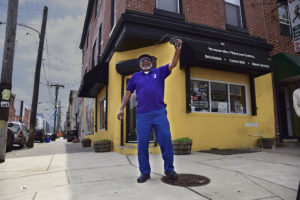 Kane makes his rounds along 19th and Girard Avenue during the day. He can often be found at Kayuh Bicycles and Café. | Photo: Richelle Kota

Gentrification is nothing new to the city, but it has accelerated in pockets of North Philadelphia over the last decade. Postindustrial economic decline, “white flight,” and persistent racial tensions following the Columbia Avenue riot in 1964 all decimated once lively and thriving areas in the city teeming with Black culture. The recent uptick in young people moving into cities has attracted developers looking to cash in on the back-to-the-city movement by building multi-unit apartments and luxury condominiums in economically depressed areas. As a result, property values and taxes in have skyrocketed, which ultimately leads to displacement and a shift in demographics. According to a recent study by the National Community Reinvestment Coalition, in Philadelphia 57 different census tracts have been gentrified between 2000 and 2013, impacting upwards of 12,000 residents who experienced displacement as a result of an influx of higher-income residents. One can imagine that similar numbers collected during the next census will be staggering.

In 2009, Kane began noticing changes in his own neighborhood, some good, some bad. He is quick to balance his nostalgia with bad memories of gang warfare and territorial violence. Kane often found himself having to literally fight his way through different parts of North Philadelphia. To Kane, not all neighborhood history is uplifting, and there have been a few positive outcomes to gentrification. On some blocks its a soft of overlap that allows people of different cultural backgrounds to come together, to live, to party, and enjoy the home that so many have made and continue to make Francisville. However, he says people are definitely being pushed out of his neighborhood and losing the homes that they have lived in and that their families have owned for generations. What began as a seemingly peaceful integration of Francisville has transformed into a storm of development and displacement. Such is the narrative.

Kane is a testament to the resilience of his corner of North Philly and its residents, even as the area is being bought out from beneath their feet. Kane says that if he was ever elected as the official mayor of Girard Avenue he would make sure these new changes come with the respect and care owed to those who have been pushed out and those that still remain in the neighborhood.

Richelle Kota Richelle Kota is an immigrant, writer, nature enthusiast, and recent graduate living in Philadelphia. Her work has been published by Calyx Press, Yes Poetry, Peach Mag, Breadcrumbs Mag, Cordella, Visual Verse, and Recenter Press. She aspires to live a very simple life on a farm with many pigs, goats, and dogs. You can follow her on Instagram @tiniestdad and visit her website at www.richelle.work