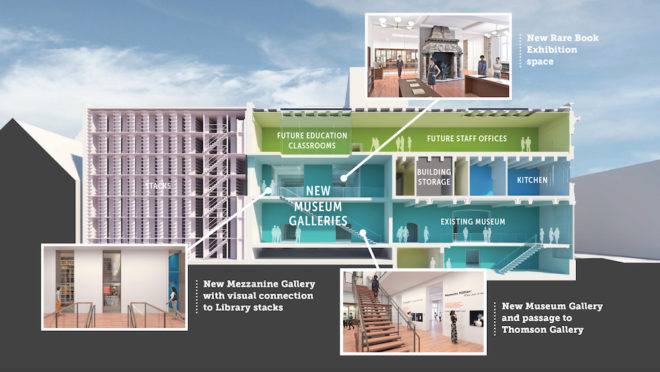 The Mütter Museum at 22nd and Chestnut Streets plan to double its library and exhibition space by 2023 Through a $25 million capital campaign. Roughly $10.7 million has been raised so far. | Rendering courtesy of KieranTimberlake

At their annual meeting earlier this month, in their grand 1909 Beaux-Arts building on 22nd Street, the fellows of The College of Physicians of Philadelphia (CPP) were bemused by the extra attention of the press and the presence of Philadelphia mayor Jim Kenney. “Nobody knows about The College of Physicians,” laughed one doctor about the oldest private medical society in the United States. However, everyone knows the Mütter Museum, one of the country’s most famous medical history museums. The College announced renovation plans to double the museum’s exhibition space by 2023 through a $25 million capital campaign goal and is working with architectural firm KieranTimberlake on the proposed expansion.

What had been an obscure 19th century collection of medical oddities has become a favorite gross-out destination for tourists and children on school field trips. Its notoriety expanded beyond the Philadelphia region through the television appearances on Late Night with David Letterman by former director Gretchen Worden in the 1980s, causing attendance numbers to skyrocket from a few hundred annually to about 180,000 in 2018.

With a capacity of just 250, the museum now struggles with overcrowding, especially on weekends and during big Center City events like the Welcome America festival leading up to Independence Day. And there’s overcrowding on the other side of the display case glass, too. The museum has space for a mere 10% of its specimens.

Finding a solution to managing such growth was a focus of that annual meeting, as the CPP announced a $25 million fundraising campaign, part of which would enable the Mütter Museum to double in size to 10,000 square feet of exhibition space.

Such an expansion plan might set off preservationist alarm bells. Much of the charm of the Mütter Museum and the CPP is the intact Victorian character, both interior and exterior. However, its status as a U.S. National Historic Landmark and listing on the National Register of Historic Places precludes any alteration to the latter.

Although the CPP property is nearly three-quarters of an acre, the vast majority of the parcel is covered by the building’s footprint and the Benjamin Rush Medicinal Plant Garden. Building an annex wouldn’t be possible.

So where to find an additional 5,000 square feet for the Mütter Museum? By reducing the more private parts of the building to add to the public side. More than half of the building is occupied by the Historical Medical Library, consisting of rare books, legendary medical texts, and, taking up the most space, the CPP’s collection of medical journals. “This used to be the place you went to for journals,” said president and CEO George Wohlreich, explaining that the library, founded in 1788, served as the main medical library for the Philadelphia region for over 150 years.

A slideshow of the Mütter Museum’s planned expansion. Renderings courtesy of KieranTimberlake. 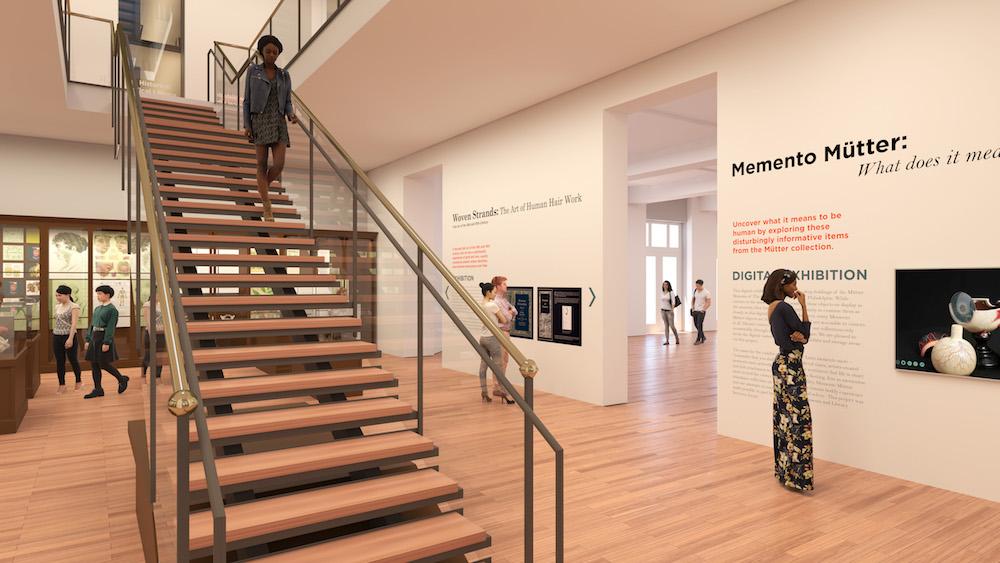 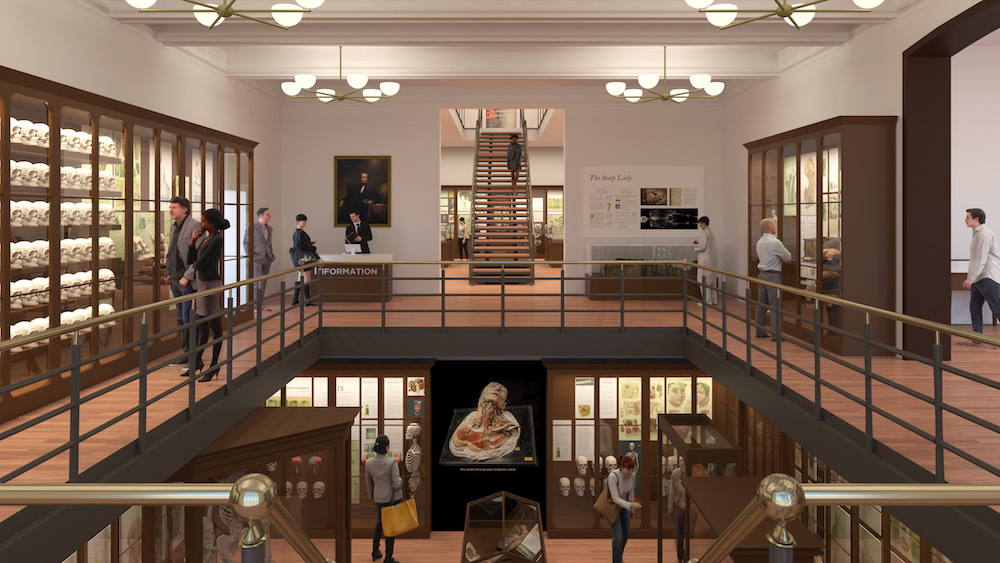 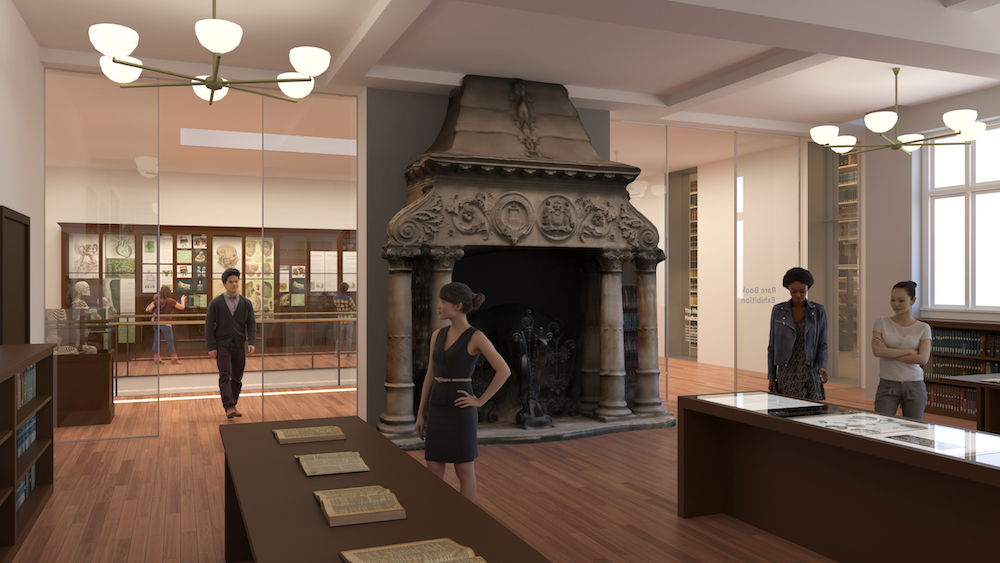 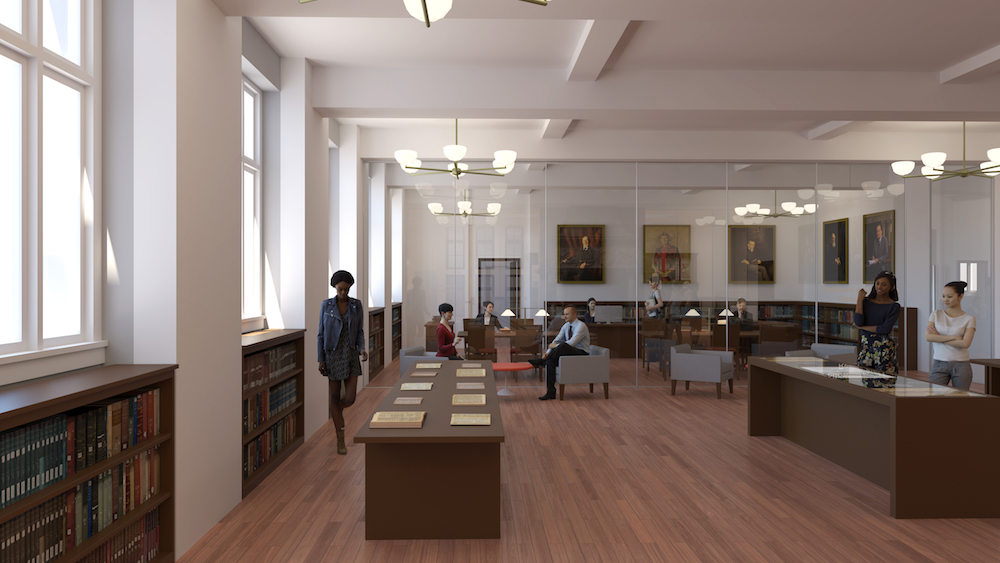 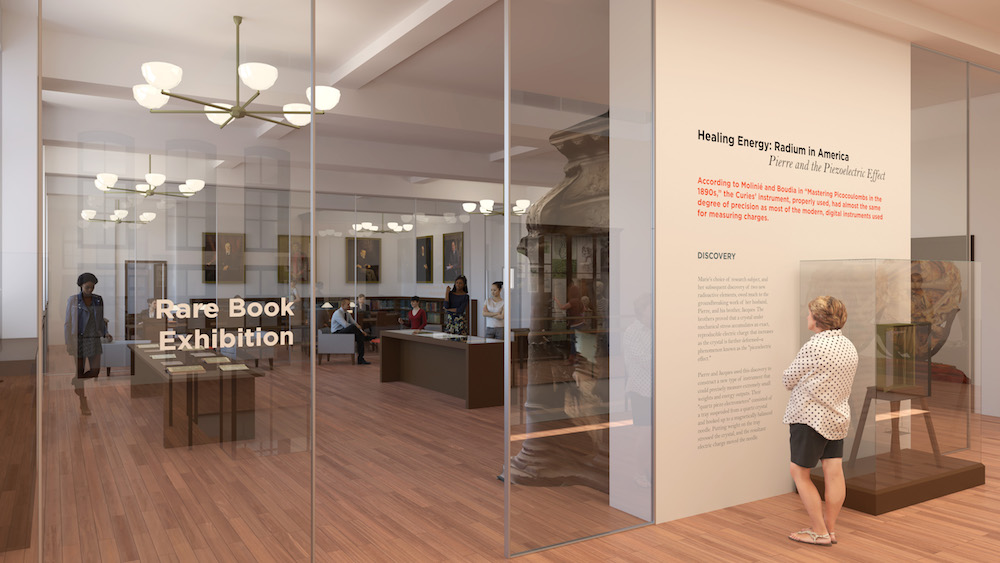 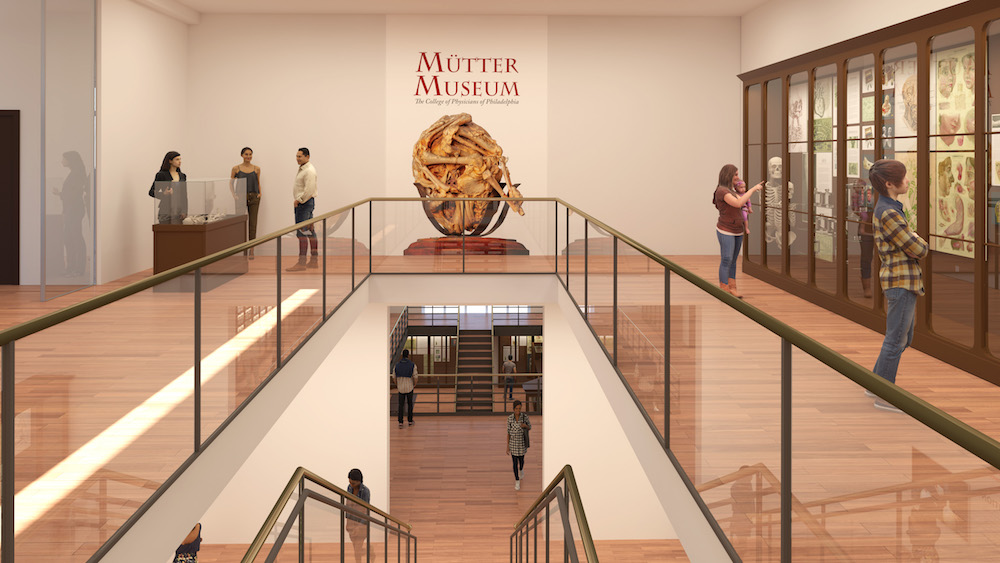 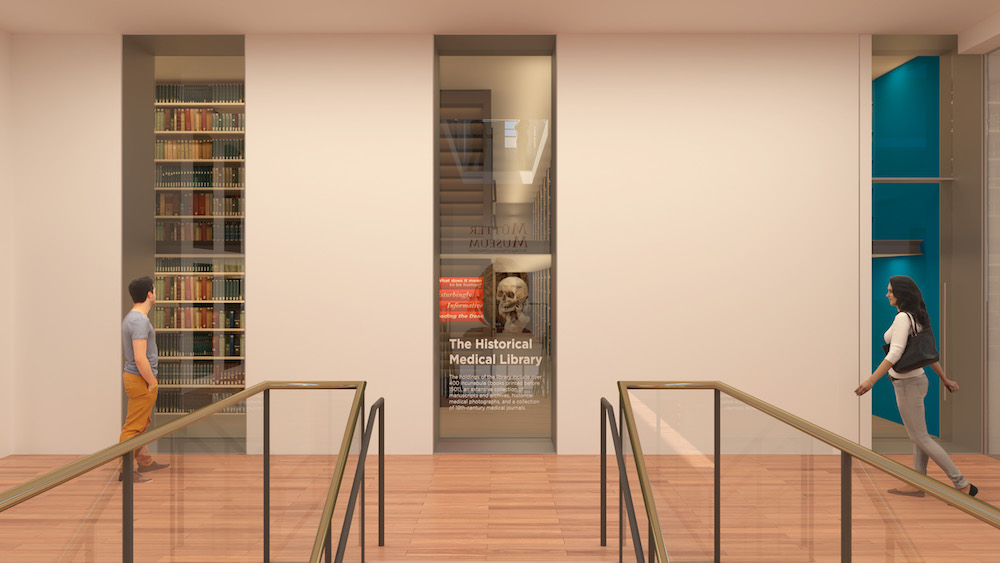 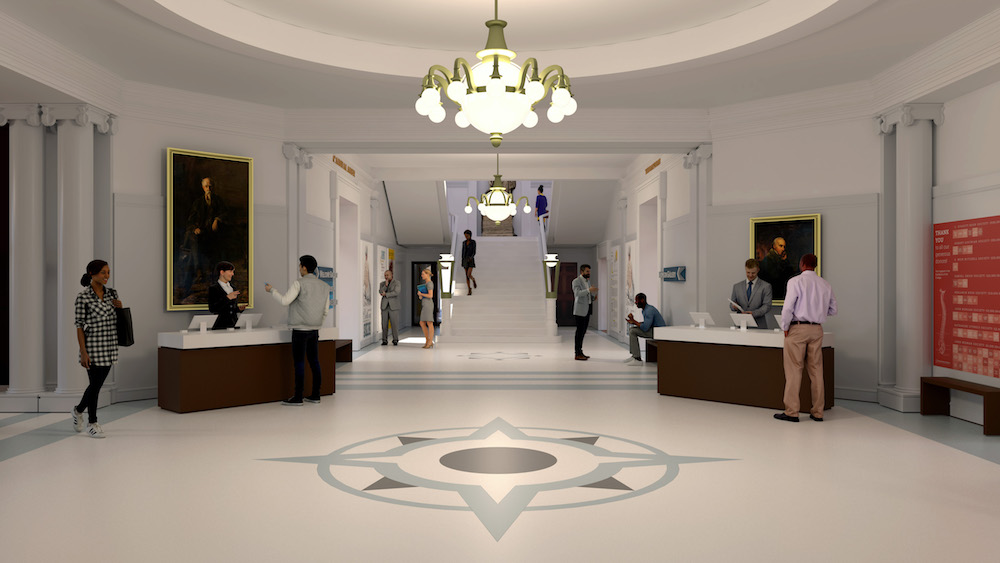 Today, medical schools have their own libraries and most journals are available online, so the CPP is planning a process of deaccessioning their collection. After digitization, each edition will be assessed, and, if deemed rare or unique, the original will be stored offsite. And how will they handle the massive collection of journals that they don’t keep? “Ten years ago, we’d be sending them to medical institutions in central Asia or Africa,” Wohlreich noted. “Now, most only want editions published within the past 10 years.” Or not at all, as online access becomes the preferred method worldwide.

Wohlreich said they have identified some new donees. “Art schools are interested in some of them for the study of anatomy, and programs in papermaking and bookmaking want to study the older methods of production they represent.” The remainder will be mulched or recycled.

Wohlreich estimates this phase of the project will take three years to complete and will open up hundreds of thousands of cubic feet.

It’s not the first time the CPP’s collections have outgrown their spaces. The current building is the institution’s sixth location, having had early homes at the University of Pennsylvania (then at 4th and Arch Streets) and Pennsylvania Hospital, among others. It finally erected a building of its own at 13th and Locust Streets in 1863 to honor the terms of Thomas Dent Mütter’s will, which bestowed his pathology collection and a $30,000 endowment for its support if the CPP had a fireproof building to house it. A few decades later, the continued growth of the library and museum necessitated another move, and the current building was designed by the architectural firm Cope and Stewardson and built largely with gifts from Andrew Carnegie.

But doubling the exhibition space for the Mütter Museum still means the majority of the collection will be in storage at any given time. “We’re going to rotate our specimens more frequently,” said Wohlreich. “It’s a constant dilemma. You have visitors who see something fascinating, bring people back to see it, and it’s gone. Or, others on a return trip will say, ‘Oh, the same old stuff as last time.’ No matter what, you’re always annoying someone.”

Not all of that newly available space will go to the Mütter Museum. The CPP also plans to create an exhibition space and reading room for the rare books of the Historical Medical Library, which are currently available for public viewing by appointment only. The collection includes over 400 incunabula, books printed before 1501, in the early days of moveable type.

This new gallery will be built from the Norris Room, currently not open to the public. It will retain a carved stone Gothic fireplace designed by Theophilus Parsons Chandler, Jr., who founded Penn’s department of architecture (now PennDesign).  The fireplace had been in the CPP’s former Locust Street building.

Although they’re obviously deeply committed to the history of their organization, its building, and collections, the CPP is planning one decidedly non-Victorian change. “We’re going to light the building facade and garden,” CEO Wohlreich said. “It’s such a beautiful building, and the garden is a living exhibit, so we want to show them off.”

The $25 million dollar campaign began a quiet phase in late 2017, which raised about 40% of the goal. Outgoing board chair Andrea Baldeck called it “a happy challenge to meet all the uses of our building.” Staff at the CPP say they are set to announce a new major gift to the project shortly.