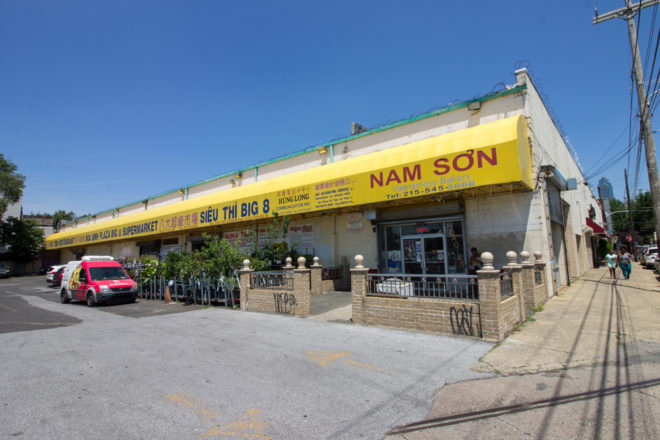 Hoa Binh Plaza, or “Peace Plaza,” at 16th Street and Washington Avenue has been a fixture of the Vietnamese and Cambodian communities west of of Broad Street since 1990. That could change soon if local real estate developer Streamline moves forward with plans to raze the shopping complex for a collection of town houses, duplexes, and apartment units. | Photo: Michael Bixler

Last night on Washington Avenue a multi-lingual, intergenerational crowd of about 60 people gathered in the back dining room of Huong Tram Restaurant in the Hoa Binh Plaza, intent of making themselves heard by their City Councilman Kenyatta Johnson. The issue was the proposed razing of the small 90s-era strip mall at 16th Street and the likely demise of the long-standing Asian-American businesses there.

While the property’s prospective buyer, Philly-based developer Streamline, eventually revealed its plans to build a large block of townhouses there, the business owners related how the current owners and the developer have kept them in the dark. “There hasn’t been anyone talking to us,” claimed Mr. Toan, the restaurant’s owner through a translator. “We’ve been forced into a dead end, passively waiting for the end.”

Washington Avenue has seen numerous transformations, from its 19th century history as a manufacturing corridor, and then morphing into a mix of suppliers to the building trades in the second half of the 20th century. As the millennium approached, southeast Asian immigrant communities arrived, finding commercial and residential properties that were cheaper and more plentiful than in Chinatown.

The next wave is now arriving, as the hot neighborhoods of Point Breeze to the south, Graduate Hospital to the north, and East Passyunk and Bella Vista are expanding and butting up against Washington Avenue. It’s driving up real estate prices and putting pressure on the long-standing businesses like the building supply stores and auto repair shops that line the avenue. The older businesses are noisy and often unsightly–not a harmonious mix for the residents of the new townhouses.

And converting to residential not only affects those parcels being developed, but also draws the requisite cafes and shops catering to the new residents, which ultimately pushes out existing small businesses.

That’s the scenario playing out now at 16th and Washington, where Hoa Binh Plaza, or “Peace Plaza,” has housed southeast Asian businesses since it opened in 1990. As in several areas of the city, Streamline’s plans to raze the supermarket, bakery, and restaurant and construct two rows of townhouses, a handful of duplexes, and two multi-unit buildings seems to be a familiar turn of events with an inevitable outcome.

However, zoning might prevent it from being a given. Much of the eastern portion of Washington Avenue, from Front to Broad Streets, is zoned either residential, multi-family, or neighborhood commercial mixed use, which allows for the intermingling of residential and commercial properties. But when you cross Broad Street going west, the zoning is almost entirely industrial, with residential use prohibited. 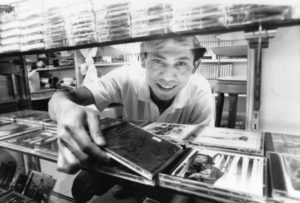 Several of the Hoa Binh Plaza business owners and their supporters have drafted a petition opposing the development. They aim to deliver it to a Zoning Board of Adjustment (ZBA) hearing on July 24, at which Streamline is requesting a zoning variance to allow the construction of residential units. Co-sponsored by the community groups 18MR.org, Viet Lead, the Cambodian Association of Greater Philadelphia, and Soil Generation, the petition currently has over 10,000 of the 12,800 signatures they are seeking.

At the meeting, Johnson listened quietly to the sometimes tearful testimonies, delivered in Vietnamese, Khmer, and English. Many spoke of the community that has been fostered by the plaza, dating back to when their grandparents came to the area as refugees. When given the floor, Johnson related how he’d grown up in the neighborhood and recalled his grandmother shopping at the Plaza’s Big 8 Supermarket. “I can’t support evicting all the tenants,” he said, promising to reach out to the developer and to the South of South Neighborhood Association (SOSNA) to find a solution.

Although Johnson stopped short of offering a concrete plan, the crowd appreciated his words. “Having him present was a step forward,” said Nancy Nguyen, executive director of Viet Lead.

While the petitioners hope to hold on to the status quo, SOSNA members have looked for compromise, perhaps sensing the futility of fighting the tidal wave of development that’s careening along Washington Avenue. “We want to support local businesses,” said Nolan Tully, a member of SOSNA’s board and zoning committee. “So we reached out to the developer about helping the businesses relocate, hopefully still in the area.”

But such actions can place them in conflicting situations: as the Registered Community Organization (RCO) for the area, SOSNA has a role to play in the zoning hearing process.

The Hoa Binh merchants, not convinced they could find replacement locations and also preferring to stay together, want to ask Streamline to alter its plans and add a strip of commercial tenants to the complex along the 16th Street side of the parcel. “We’re not trying to stop anyone from making money,” said Thomas Sinnison of Nam Son Bakery. “We just want a chance to stay in the neighborhood,” noting that at least one business has been there since 1991, the year after the plaza opened.

Sinnison’s suggestion of a mix of commercial and residential mirrors what’s been happening elsewhere along Washington Avenue. SOSNA holds up one in particular, at 2401 Washington, as a successful example of developers, neighbors, and the City working together. They drafted a Community Benefits Agreement (CBA), in which the developers offered neighborhood improvements, including a handful of affordable housing units, local hiring, bicycle infrastructure, and tree plantings. Councilman Johnson then introduced a rezoning bill for the property, which would eliminate the need for a ZBA hearing. Approval was held up at a City Council Rules Committee hearing last week when another neighborhood group wanted to weigh in and will now wait until Council returns from summer recess.

The lure of so many large parcels along Washington Avenue is drawing more and more developers to the area. “It’s moving at an extreme pace,” agreed Murray Spencer, another member of SOSNA’s board and zoning committee, noting that, after entering into its very first CBA barely 12 months ago, it’s already worked on two others. The puzzle now is how to meld SOSNA’s desire for compromise with the Hoa Binh businesses’ commitment to their past and present and the developer’s plans for the future.