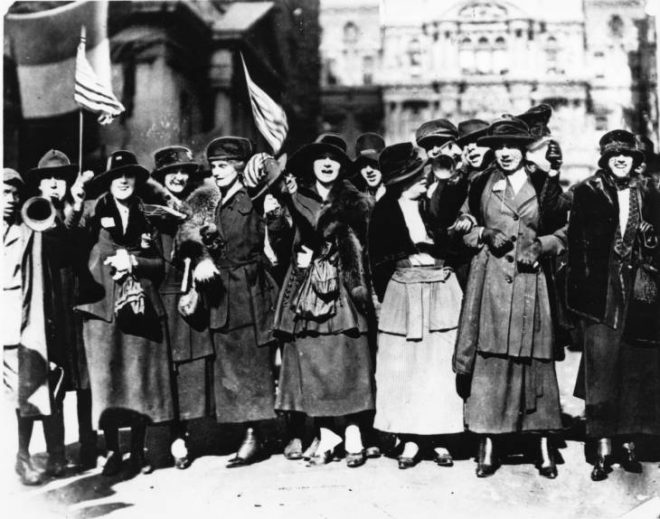 June marks the 100th anniversary of Pennsylvania ratifying the 19th Amendment giving votes to women. Pennsylvania, I believe, is the fundamental building block, the keystone if you will, of woman’s suffrage in the United States. Philadelphia was at the center of the action in the state and Independence Hall was the epicenter.

A 1776 letter from Abigail Adams to her husband John while he was a delegate to the Constitutional Convention at the Pennsylvania State House (later known as Independence Hall) is considered the opening salvo in the long battle for female suffrage: “…I desire you would remember the ladies and be more generous and favorable to them than your ancestors. Do not put such unlimited power into the hands of the husbands. Remember, all men would be tyrants if they could. If particular care and attention is not paid to the ladies, we are determined to foment a rebellion, and will not hold ourselves bound by any laws in which we have no voice or representation.”

Fast forward to 1832. Prevented from joining the newly established American Anti-Slavery Society, an interracial group of women formed the Philadelphia Female Anti-Slavery Society. During an era when women were not expected to have any public or political role, they walked door to door collecting signatures on anti-slavery petitions.

The organizing skills developed and political awakening experienced by female abolitionists led to the first gathering for the rights of American women, the Seneca Falls Convention of 1848. One of the key organizers was Philadelphia abolitionist Lucretia Mott. 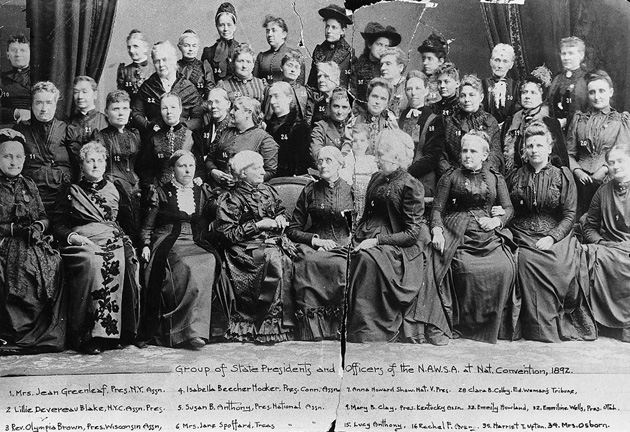 In 1866, advocates for African American and women’s rights, many of whom were already working together, joined forces to create the American Equal Rights Association (AERA) for which Mott served as the president of the Pennsylvania affiliate. Harriet Forten Purvis and Margaretta Forten were two of the African American women of Philadelphia who also transitioned from abolitionists to suffragettes.

The fight for ratification of the 15th Amendment, granting voting rights to black men, however, caused a rift in the AERA. Some of its leaders, like Susan B. Anthony and Elizabeth Cady Stanton, believed that white women should be given the franchise first and for blatantly racist reasons. This faction formed the National Women’s Suffrage Association (NWSA). Others, including African American writer and Philadelphia resident Frances Ellen Watkins Harper, believed that opening the vote to black men was an appropriate first step in expanding the franchise. Adherents of this view formed the American Women’s Suffrage Association (AWSA).

The AWSA was the larger and more moderate of the two organizations. Activities of the NWSA, however, lead us right back to Philadelphia’s prominence. In 1871, Carrie S. Burnham, attempted to vote in a mayoral election asserting that the franchise was an essential component of the citizenship guaranteed to Americans by the 14th Amendment. (Note: this was the same election in which Octavius Catto and several other men were killed in an effort to repress the newly granted black vote.) Although Burnham took her case all the way to the Pennsylvania Supreme Court, votes for female citizens remained elusive.

In 1876, the nation’s attention was fixed on Philadelphia, the host city for a massive Centennial exposition. Numerous dignitaries from across the nation and the world attended July 4th festivities at Independence Hall. Susan B. Anthony and other members of the NWSA decided to surprise the crowd with an assertive demonstration of their desire for the vote.

This compelling chapter in the struggle for women’s rights can be viewed below. Video courtesy of Making History Productions.

During the closing years of the 19th century arguments over the 15th Amendment had faded. In 1890 members of the NWSA and AWSA joined forces to form the linguistically overwrought National American Women’s Suffrage Association (NAWSA).

The Pennsylvania branch of NAWSA chose to pursue “educational methods in keeping with the dignity of the movement and the character of the women engaged in it.” Holding meetings, distributing literature, circulating petitions, and writing newspaper and magazine articles were the strategies they used to advocate for their cause.

Gradually, some states did begin granting women the franchise. By 1915, Pennsylvania stood out as by far the most populous state, and Philadelphia as the most populous city, in which women were denied voting rights.

NAWSA’s gentle tactics bore fruit when the Pennsylvania legislature passed bills endorsing women’s suffrage in both 1913 and 1915. As required by state law, after succeeding in two legislative sessions, the suffrage amendment was submitted to a statewide referendum—on which, of course, all the voters would be male.

Adding to their usual tool kit of educational approaches, NAWSA members traveled to every county in the state with the “Justice Bell,” a replica of the Liberty Bell with its gong strapped to the side, only to ring once Pennsylvania women could vote. The 2,000 pound Justice Bell ended its tour with a suffrage parade before Independence Hall that was attended by tens of thousands. Alice Dunbar-Nelson, widow of poet Paul Laurence Dunbar, was among the activists who toured the state encouraging black men to vote for female suffrage.

The referendum, however, was defeated by a narrow margin. 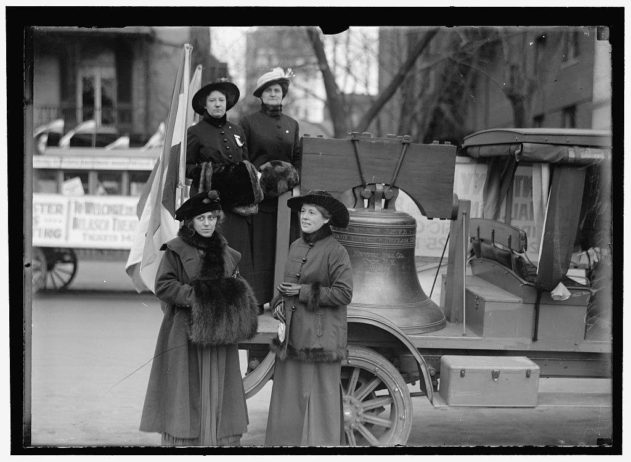 In 1915 the National American Women’s Suffrage Association toured the country with the Justice Bell, a 2,000 pound replica of the Liberty Bell. | Image courtesy of the Historical Society of Pennsylvania

Why then, in spite of this disappointing defeat, do I insist that Pennsylvania deserves a disproportionate amount of the credit for female suffrage? I am generally not one to subscribe to the great man theory of history. In this case, though, let me introduce or reintroduce you to a singularly great Pennsylvania(ish) woman, Alice Paul.

Yes, Paul was born in 1887 in Moorestown, New Jersey. But she was a Quaker descendent of William Penn and moved west to Pennsylvania at her earliest opportunity—to attend Swarthmore College from which she earned a BA in 1905. She later earned a masters degree from the University of Pennsylvania. I am therefore claiming Alice Paul for our state, although I am sure many a New Jerseyan will disagree with me.

Influenced by her British counterparts, Paul conducted controversial open-air meetings in places such as City Hall plaza and a busy intersection in Kensington. More significantly, in 1913 Paul stole the limelight from Woodrow Wilson by leading a massive suffrage parade the day before his first inauguration. Shades of the 2017 Women’s March perhaps?

In 1914, Paul organized May Day celebrations in every state and inspired Pennsylvania’s first women’s march—from Rittenhouse Square to Washington Square along Market Street. And in 1916, Paul and others formed the National Woman’s Party or NWP. 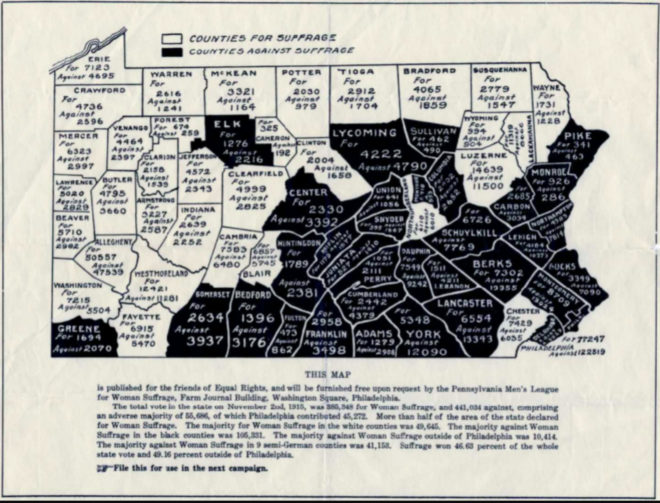 A 1915 map of Pennsylvania showing counties that were for and against equal rights for women. | Image courtesy of the Historical Society of Pennsylvania

The NWP differed significantly from NAWSA. While NAWSA was willing to work on a state by state basis, NWP’s focus was national. While NAWSA focused on educational strategies, the NWP used aggressive, even militant tactics to garner attention for their cause. NAWSA was both loosely and hierarchically. The NWP’s sole leader was Alice Paul.

In 1916, NAWSA president Carrie Chapman Catt made a deal with Woodrow Wilson to put the suffrage movement on hold once the country became involved in the First World War, and NAWSA members used the war years as an opportunity to demonstrate the patriotism of American women. In contrast, the NWP took the Great War as an opportunity to point out the hypocrisy of fighting for democracy abroad while denying voting rights for women at home.

The NWP’s “Silent Sentinels” became the first group to picket in front of the White House. They participated in “Watchfire” protests during which Woodrow Wilson’s speeches were burned and his body was hanged in effigy. Numerous participants in these demonstrations were arrested, charged with obstructing traffic, and imprisoned at Occoquan Workhouse in Virginia. Inmates were beaten, verbally harassed, and compelled to endure an airless, rat-infested facility. Alice Paul, who was kept in solitary confinement, launched a hunger strike to protest the deplorable conditions. Paul was force-fed by prison authorities and transferred to a psychiatric ward. In spite of the arrests, protests continued for 18 months. Publicity about the arrests and subsequent abuse in jail engendered outrage and led to increased support for the cause.

Although much of the rank and file membership of the NWP were young women similar in age to Alice Paul, the contributions, both literal and figurative, of older Pennsylvania women were crucial to the success of the group. Dora Lewis, a member of an established and moneyed Philadelphia family, was among the founders and leaders of the NWP. She was arrested multiple times and endured the horrendous conditions of Occoquan prisons—including being beaten, kicked, choked, and dragged by guards on the so-called Night of Terror in November of 1917. Mary Winsor of Haverford, a graduate of Bryn Mawr College and Drexel Institute, was another woman of privilege who became a leader—and also an inmate—in the quest for female suffrage. Powelton Village resident Caroline Katzenstein was active in and wrote about the NWP’s fight for suffrage in her book Lifting the Curtain: The State and National Suffrage Campaigns as I Saw Them. The cover illustration of the book depicts a suffrage demonstration in front of, not surprisingly, Independence Hall. 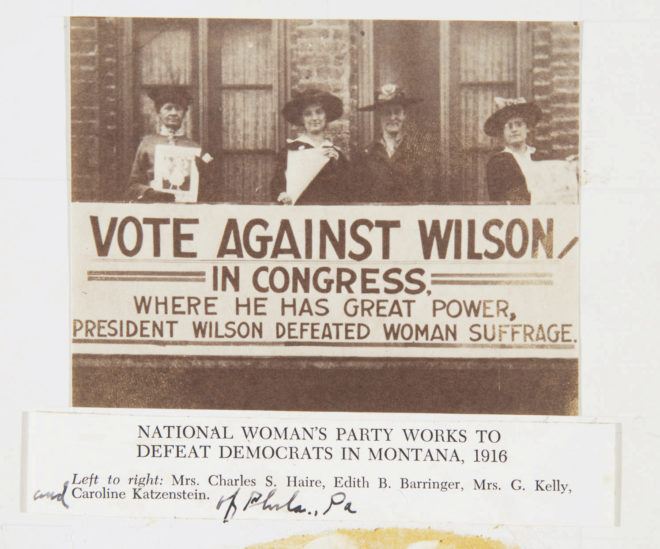 By 1919, the First World War was over and the paired efforts of NAWSA (working with President Wilson) and the NWP (embarrassing and pressuring Wilson) achieved their desired result. He endorsed female suffrage and Congress soon approved as well.

By then, Pennsylvania had turned a corner. On June 17th 2019, our state—home of Lucretia Mott and arguably home to Alice Paul—was the 8th to ratify the 19th Amendment. A number of other states quickly followed Pennsylvania’s example. But the entire South remained opposed to votes for women—in large part because Southerners worried that opening the franchise to women would lead black men to seek to revive their moribund voting rights. Finally, on August 18, 1920—famously determined by the single vote of a 24-year-old Tennessee legislator fearing his own mother—the 19th Amendment became the law of the land.

On September 25, 1920, the Justice Bell rang for the first time, fittingly, in front of Independence Hall. If only Abigail Adams could have heard it toll.