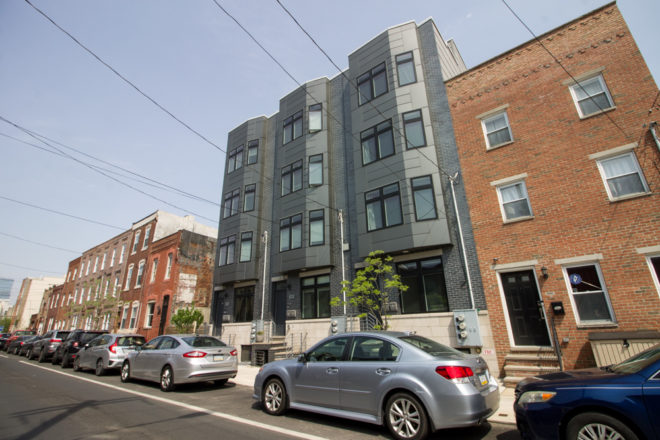 Real estate investment is booming in Point Breeze and the income divide between longtime residents and newcomers is getting wider. New construction projects on nearly every block underscore the growing economic gap. | Photo: Michael Bixler

Philadelphia is changing at a rapid pace through real estate investment and new construction. Rising rents and property values are transforming the social and economic makeup of entire neighborhoods. But, beyond extreme, individual cases like Fishtown and Point Breeze, it may not be clear what the bigger picture looks like citywide. To better understand the situation, the Philadelphia Coalition for Affordable Communities (PCAC) recently completed a 12-page report on the state of development and affordability in Philadelphia.

The report lays out how neighborhoods are changing in terms of cost and demographics. It suggests policy proposals to protect and create affordable and accessible housing. The report is a follow up on a similar report that the PCAC released five years ago. Predictably, it shows that certain trends in affordability in the city have continued or gotten more extreme over a relatively short period of time.

One issue that the report makes clear is the increase in housing costs. According to PCAC’s report, between 2010 and 2016 housing costs in North Philadelphia rose 363%. South Philadelphia and West Philadelphia also saw big spikes in housing costs–292% and 169%, respectively. As housing gets more expensive, a higher percentage of households have become “housing-cost burdened” i.e. more people today are paying more than they can afford than they were five years ago. As of 2016, 52% of renters and 30% of owner households spent more than 30% of their monthly income on housing expenses says PCAC’s report.

As costs rise for housing, neighborhood demographics ultimately change. All three of the aforementioned neighborhoods have seen a decrease in its African American population and an increase in its white population. In West Philadelphia, the black population dropped 35% while the white population rose 74% according to PCAC’s report. “We’re looking at a fundamental shift in the fabric of the neighborhood,” said Christi Clark, organizing director with the Women’s Community Revitalization Project (WCRP). Clark, one of the organizers of PCAC, said the coalition produced the report to use as a tool to demonstrate to City Council the need to take more action on these issues. PCAC formed five years ago to pressure the City to fund affordability measures. The coalition brings together 65 organizations that include community development corporations, faith and community groups, unions, and many others who have found common ground in one basic demand: affordable and accessible housing and green space.

PCAC recently celebrated a big victory. At the end of 2018, City Council agreed to put $71 million into Philadelphia’s Housing Trust Fund over the course of the next five years. The Housing Trust Fund currently receives between $9 and $14 million a year, so this is a big increase. While happy about the allocated funding, Clark believes it is not enough. “It’s really easy for our elected officials to say we gave you what you asked for. But the money that we won, while significant, is only for five years,” said Clark. “The housing crisis will not be resolved in five years. We want this policy to be permanent. We’re fighting for a commitment from the general fund of $35 million annually.”

Another issue is that the dedicated funding is going into a sub-fund of the Housing Trust Fund, not the main fund. While the main fund requires that half of all the money allocated go to those who are making 30% or below of the area median income, money in the sub-fund does not have these restrictions and money may go to those making up to 120% of the area median income. In other words, while the funding is quite significant, it does not prioritize low-income households.

30 organizations within the coalition were part of the Campaign to Take Back Vacant Land and formed PCAC in 2013. Roughly 15 of theses organizations have been working together since 2000. The push to establish the Housing Trust Fund began in 2000. The fund provides money for four major categories: homelessness prevention, basic systems repair (fixing a leaking roof, etc.), adaptive modification to make homes accessible to those with disabilities, and new construction of affordable housing.

Thomas Earle, CEO of Liberty Resources, a disability rights organization, explained how important the initial coalition that fought to establish the Housing Trust Fund was. “Beginning in 2002 and 2003, we learned through community organizing that when we join forces with other similar organizations it really grew our power and grew our issues.” After the initial victory of convincing the City to establish the Housing Trust Fund, many of the organizations in the original coalition continued working together and turned their focus to inclusionary zoning. “As Philadelphia continues to develop, the idea with inclusionary zoning is that developers and builders set aside a certain number of units in any project to be affordable, accessible units. If they don’t do it, they pay into the Housing Trust Fund,” said Earle. While the fight for inclusionary zoning laws was successful in terms of getting legislation passed, he said that it falls short on enforcement and effective penalties for noncompliance.

After succeeding in getting the zoning legislation passed in 2009, many of the groups involved turned to advocating for a land bank and formed the Campaign to Take Back Vacant Land. The coalition quickly grew to include 55 organizations. “Through that campaign, we came to understand that there were 40,000 vacant parcels of land in our city with multiple agencies owning some of that land. It was really unclear what the process was for how to get that land and who determined it,” said Clarke. “We fought for a land bank that was fair, transparent, and accountable. It was about consolidating publicly-held and tax delinquent land into one agency that would then have to set annual targets for where that land was going so it’s not just about land to the highest bidder and market rate development.”

The Philadelphia Land Bank was established in 2013, centralizing control of where vacant land decisions get made and beginning the process of redirecting land towards community needs. However, PCAC’s new report makes clear that vacant land is not being redistributed on an efficient timeline. Fewer than 300 of the 42,000 vacant properties have been redistributed in six years. “The challenge that the Land Bank has faced is from City Council,” said Earle. “You still have council members preserving their councilmanic prerogative, determining whether properties in their district even go into the land bank.” Councilmanic prerogative is a system that is currently under heavy criticism. The policy allows council members to control the distribution of city-owned land in their districts, essentially bypassing the Land Bank and the input of others on City Council.

The PCAC won major victories through their campaigns. However, the struggle continues in terms of implementation. The coalition’s organizers believe its new report makes clear that there is much more that needs to be done to ensure that the city remains affordable and accessible for its long-term residents. Philadelphia currently has the highest rate of poverty (26%) and the highest population of people with disabilities (16%) out of all major American cities, causing a heightened need for funding to ensure affordability and accessibility for vulnerable residents. The Coalition’s report suggests necessary next steps and what it believes is needed from City Council: more money in the Housing Trust Fund and increased accountability from the Land Bank to distribute land towards community needs.