Automotive Museum In Southwest Philly Goes The Distance (And Then Some) 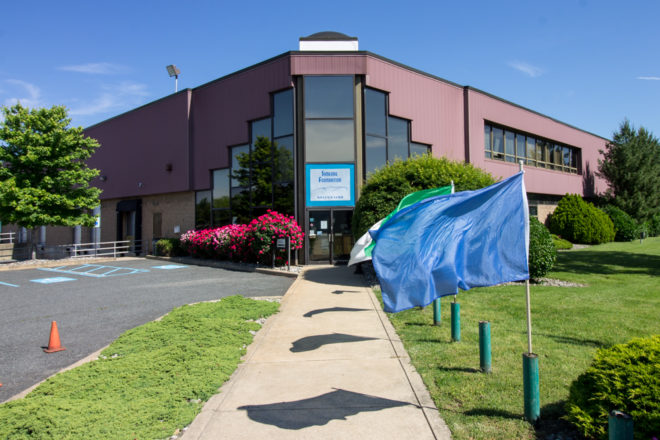 The Simeone Foundation Automotive Museum at 6825-31 Norwitch Drive may be well off the beaten path, but its collection of historic race cars is astounding. | Photo: Michael Bixler

If modern evolution is a linear progression of technological advancements, in no place is this more evident than the Simeone Foundation Automotive Museum. The easily overlooked building on Norwitch Drive in Southwest Philadelphia is a treasure trove of rare racing cars. It is a place where the past comes to vibrant life, where long forgotten machines are reintroduced to new generations and the early days of racing culture are celebrated.

The museum is currently home to 70 immaculately maintained and extremely coveted race cars, lined up and displayed by decade in colorful diorama-type settings. Dating back to the early 1900s, cars like Ferraris, Jaguars, BMWs, and Maseratis sit proudly as tangible remnants of eras gone by. The varied assortment of vehicles are not merely parked and gathering dust. They all run, a museum requirement, and are regularly taken outside to be showcased on the museum’s three acre back lot.

What propelled the museum into existence was one man’s personal collection. Gathered over the course of decades by Dr. Frederick Simeone, a prominent Philadelphia-based neurosurgeon at Pennsylvania Hospital, the cars were first stored in an unassuming public parking garage at 8th and Lombard Streets. Simeone rented the garage and gradually began to fill it with his treasures, simultaneously keeping it open as a public garage. Ultimately, the space filled with his collection and was no longer open for public use.

“Any collection doesn’t start as a gigantic collection. It starts with one piece at a time. Back in the 1970s when the collection started, it was still possible to get really great cars. The general public had not caught up with the iconic value of certain types of cars. You had to be a historian. They were affordable to buy and I was able to select the ‘Mona Lisa’ cars of the sports racing world. They aren’t available now,” Simeone remarked. 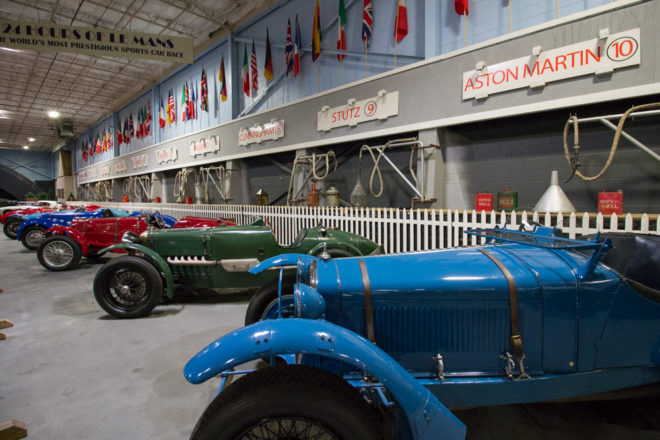 This exhibit features Le Mans racers from the 1930s through the 1970s. | Photo: Michael Bixler

Crediting his lifelong fascination of cars to his father who encouraged his interest, Simeone always had a penchant for early sports cars that were not Formula One cars. He liked racers with beautiful designs that could also drive casually on the open road. Simeone acquired the first three quarters of his collection at affordable prices, focusing on cars with noteworthy racing histories. As time went on, early racing cars morphed from hobby objects into art collector pieces. This led to a high demand and made them impossible to purchase. Simeone used other vintage cars he had attained that weren’t sports cars as trades to acquire those harder to purchase vehicles and added them to his lot.

“I wanted to make sure there was a place for them to stay in perpetuity. The original purpose of museums was to preserve. In the process of preserving, you then have the opportunity to exhibit. These cars are all very special and cannot be duplicated. They are from an era that was iconic,” he said.

Simeone noted there was specific criteria he looked for when acquiring a car or accepting one into the museum. Each car must hold historical significance and must be a car that won a race. The cars must also have original parts, and be aesthetically attractive, to demonstrate the design of the period it was made. 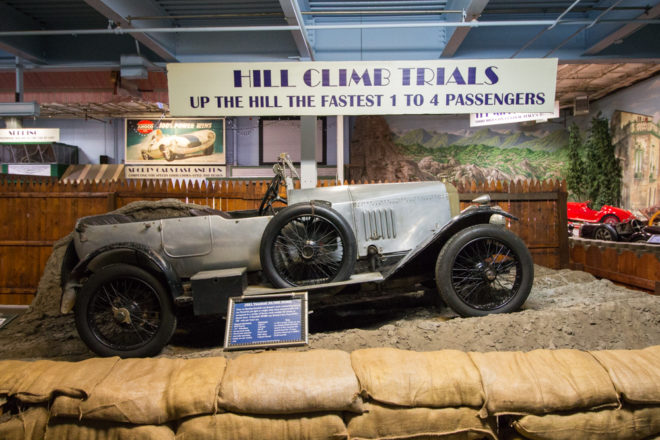 Hill climbs, where an automobile’s power and speed is tested, were popular in England in the 1920s. | Photo: Michael Bixler

“We want to have the finest cars that represent the ‘winners’ of the race world. We want to tell the evolution of these cars by the winners, to show the ingredients that lead to success. A lot of museums don’t care. We’re very fussy that they have all the right, important things particularly the original chassis, engine, and body.”

Along those lines, Simeone decided the theme of the museum would be “The Spirit of Competition” based on the concept that competition spurs forth advancements and better ways of doing things. He hoped this would especially reach younger visitors to the museum, who are finding their place in the world. The museum offers educational programs like STEAM (Science, Technology, Engineering, Arts and Mathematics) and a popular summer camp that demonstrates this focus.

“Our theme is based on the belief that competition makes everything better. The alternative is not competing. With that, there would be no evolution or development. The cars are set up chronologically, so you can see the progression. As technology evolves, things change,” Simeone said.

Preserving and maintaining the vehicles is a top priority of the museum. Among the collection, the oldest car is a 1907 Renault that was once belonged to William K. Vanderbuilt. It was donated to the museum by a man who had it in his family for 90 years. Simeone noted the rarest car in the collection is also his favorite, a blood red 1938 Alfa Romeo 2900 B. One of only four made, it is considered to be the best pre-WWII sports racing car. The museum also has rotating visiting exhibits that are popular among car clubs and those wanting to learn more on a particular make of car. Most recently, the museum showcased an exhibition of MGs. 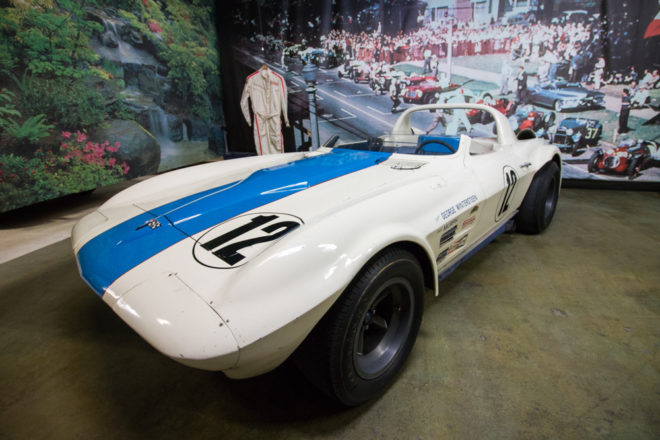 Another draw to the museum are its Demo Days, when one or two cars are taken outside and raced in the museum’s lot. Each Demo Day event focuses on a particular historical race, event, or make of a car. The day includes a brief discussion and social commentary about the featured cars.

“My real obligation is to create activities to ensure the museum is socially relevant and to use it as an educational device. The Demo is about taking an interesting car and explaining what makes it important. We associate the day with either a social event, the driver, the venue, or what was going on in the world. People love to see the cars in motion.”

Despite the impressive collection, which has garnered recognition and multiple awards overseas, the museum continues to stay under the radar of Philadelphia attractions. This has made fundraising efforts difficult. Cars in the collection can be “adopted” if a person takes a special interest in, one which usually stems from a personal connection one feels for a certain make or model.

“We have no philanthropy at all. People just don’t donate to car museums. It is a shame because the value level of the contents make us one of the highest in Philadelphia. It’s more valuable than the contents at the Rodin Museum, for instance. We are very overlooked,” Simeone remarked.

“We’ve been voted ‘Best Car Museum in the World’ twice, which is more than any other. The International Historic Motoring Awards in London gave us the ‘Best Museum’ award four times. They know about us in Europe, but not much in Philadelphia, sadly. We’re a hidden gem, I’m afraid,” he added. 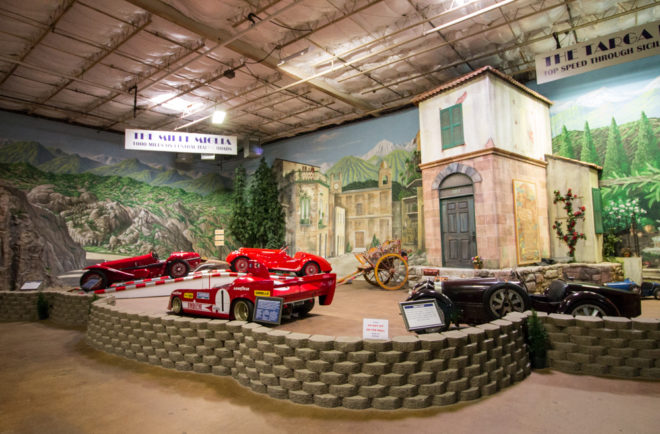 This exhibit depicts the Targa Florio, a race through the hills of Sicily, Italy. | Photo: Michael Bixler

One longtime fan of the collection is Mike Wolfe from the show, American Pickers. Wolfe, an Iowa native, has been visiting Philadelphia for years, prior to his show, and met Dr. Simeone along the way. Simeone eventually acquired a Fiat 600 cut away engine from Wolfe which he “picked” in Italy. Now on display in the museum, the exposed, functioning engine is used as a teaching aid. Wolfe holds a deep appreciation for the museum’s preservation efforts and noted its worldwide importance.

“It’s a collection that you cannot see, literally, anywhere in the world,” Wolfe said. “When I travel in Europe, they all know Dr. Simone and respect him and the collection. He has the rarest of the rare. They envy everything he has because so much of it was pulled out of Europe. It is the type of collection you could never put together today, no matter how much money you have, because the cars have all been bought up. It’s one of the best-preserved collections of European and American Le Mans cars. It’s stuff you don’t even think exists anymore.”

Wolfe noted the artistic component of the collection. “There are types of cars that tour art museums because the museums understand those cars are works of art. That is what Dr. Simeone’s whole museum is like. Everything is next level. When you go to a car museum like his you realize it’s more art than anything else. When you think about art does it always have to be a sculpture or a painting on canvas? Or can it be something that was made in an era that will never come again.” 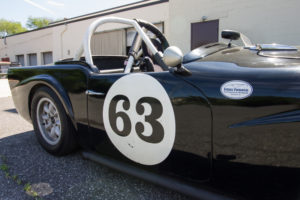 On Demo Days the public gets to see the museum’s cars in action. | Photo: Michael Bixler

Also onsite is an extensive 6,000 square foot research library, filled with automotive literature that Simeone began collecting when he was just 14 years old. The library specializes in original car company literature that came with cars upon purchase, repair instructions, early automobile designs and illustrations, and pre-World War II magazines. There is a large assortment of hard bound books. Simeone continues to gather materials and noted private collectors have donated their literature collections to the museum to keep them intact.

“Automotive literature is the classic ephemera,” said Simeone. “It disappears. There is no card catalog for automotive books. Libraries don’t ordinarily have automotive sections. The materials are really important for restorers, historians, and for people who are selling their cars and want to make sure it is authentic and original. It is one of the highlights here. It’s actually where I spend most of my time.”

Simeone hopes that anyone who visits the museum will leave with something memorable. With a plethora of rarities from all over the world, it is hard not to gain an appreciation for race car technology. As early automotive pioneering continues to catapult us into the future, we are all along for an inspiring ride.