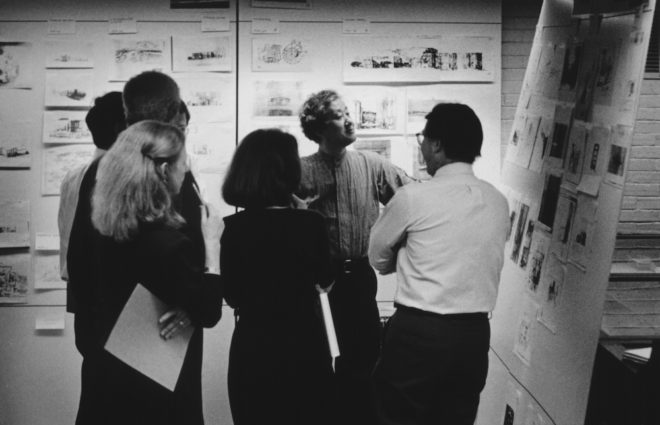 On May 24 Japanese architect Arata Isozaki, 87, received the Pritzker Architecture Prize in Versailles. The global award has been given to architects for the last 40 years in recognition of a lifetime of achievement in the building arts. It is thought of as the highest award available to a living architect. Isozaki, well known in the United States as the designer of the Museum of Contemporary Art, Los Angeles (MOCA), is perhaps better known in Philadelphia as the installation designer for the first Louis Kahn retrospective which premiered here at the Philadelphia Museum of Art in 1991 before traveling to Paris, New York, Japan, Los Angeles, Fort Worth, and Columbus, OH.

For Isozaki’s part, that exhibition was an opportunity for one architect to pay homage to an important influence. That Isozaki was involved in the project at all underscores the dramatic internationalism of the era, when the world seemed to shrink as architects increasingly accepted commissions from all over the world. 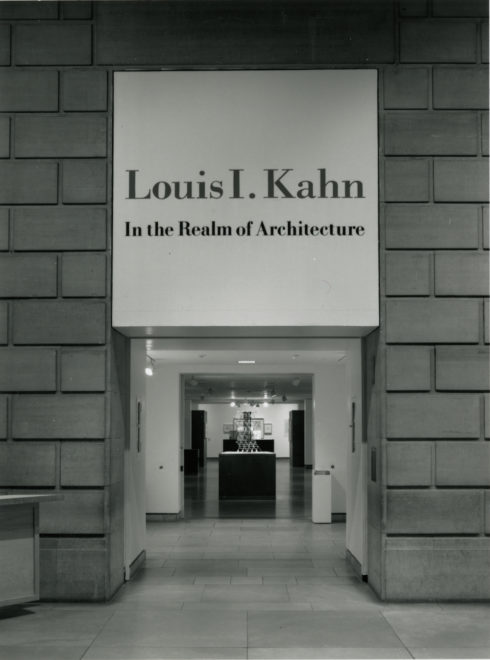 Louis I. Kahn: In the Realm of Architecture opened to the public on October 20, 1991. During its run the exhibition saw over 60,000 visitors. | Image courtesy of the Philadelphia Museum of Art

In fact, it was an auspicious collaboration far from home that led Isozaki to design the installation. Isozaki won an international competition to design MOCA in 1980. Six years later, when that building opened to universal acclaim, Richard Koshalek, the director of the museum at that time, asked Isozaki to consider extending his MOCA collaboration.

A major retrospective on the architecture of Louis I. Kahn had been on Mr. Koshalek’s mind since he left Modern Art Museum of Fort Worth in the late 1970s to direct MOCA. In Texas he had befriended Dr. Richard Fargo Brown, head of the Kimbell Art Museum.

Dr. Brown, an expert art historian, worked closely with Kahn on his design of the Kimbell. When Mr. Koshalek arrived in Fort Worth, not long after the Kimbell was completed, he and Dr. Brown spent many hours going over the Kimbell, Kahn, and the triumphs and tribulations of the project. Mr. Koshalek came to share Dr. Brown’s deep respect and appreciation for its architect.

Would Isozaki design the exhibition? Not only was he a supremely capable designer, but Isozaki deeply admired Kahn. They shared similar philosophies about the spirit and purpose of buildings. For that matter, Isozaki often said that Kahn had been an enormous influence on his Gunma Museum of Modern Art in Japan, the building he frequently referred to as his true beginning. Isozaki accepted.

With Isozaki busy designing the installation, the question of what the retrospective would actually exhibit was being worked out in Philadelphia. After his death, Kahn’s papers were collected and organized inside the Architectural Archives of the University of Pennsylvania. Drs. David B. Brownlee and David G. DeLong, Penn professors at that time, curated over 300 objects from the archives–photographs, drawings, and models which eventually filled Isozaki’s installation.

It was Dr. Brownlee who recommended to Isozaki that he use Kahn’s designs for the Mikveh Israel Synagogue as a roadmap for the installation design. Kahn had worked on the Philadelphia synagogue on and off from 1961 until 1972 when he was dismissed from the project after a new committee decided to reorient the project toward a museum instead of a place for worship. It eventually became the National Museum for American Jewish History on Market near the Independence Mall. The unfinished project was a disappointment that would follow Kahn for the rest of his life. 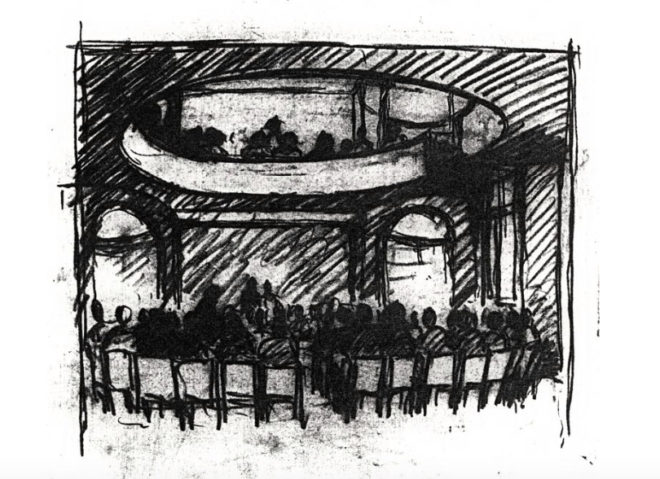 Louis Kahn often made expressive drawings of his architectural plans like the one seen here of Mikveh Israel Synagoguge (1961-1972, unbuilt). At the urging of the exhibition’s curator, Dr. David B. Brownlee, Arata Isozaki used Kahn’s plans for Mikveh as inspiration for his installation design. | Image courtesy of the Athenaeum of Philadelphia

If members of the Mikveh Israel congregation were feeling sheepish about Kahn’s plans going to waste, the exhibition would do little to diminish their mixed feelings. Isozaki’s installation clearly referenced the circular “window rooms” Kahn had designed for the Mikveh Israel. According to press releases, Isozaki intended to evoke the synagogue in “ruin-like” fashion. Kahn may have appreciated the phrase, although it is hard to know if Isozaki meant more than his focus on the specific design feature, as if the rest of the synagogue had fallen away. Isozaki was unavailable for comment before this article was published.

Nevertheless, in photographs the effect of the Isozaki’s exhibition design is impossible to discount. 12-foot-high walls order and neatly compartmentalize the large exhibition. The curve of the walls bend and shade the museum lighting, making them even more interesting to the eye as they darken in the shadow of their loping archways. They look heavy, as ruins do, and, 30 years later, they are still hard to categorize: sleek and modern, yet, strangely ancient. 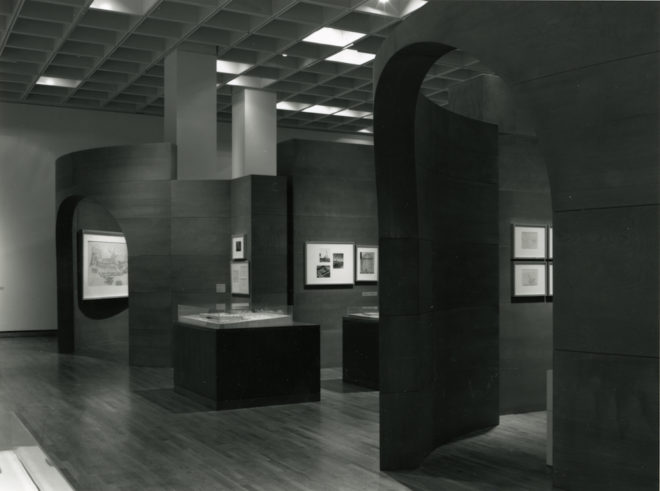 Arata Isozaki’s designed the installation of the exhibition to suggest Kahn’s unbuilt design for Mikveh Israel Synagogue, a project which was never realized. | Image courtesy of the Philadelphia Museum of Art

Louis I. Kahn: In the Realm of Architecture opened to the public at the Philadelphia Museum of Art on October 20, 1991. A month later the museum hosted a Kahn symposium, of which Jonas Salk and his wife Francoise Gilot were honored guests, perhaps paying their final respects to the man who designed The Salk Institute in San Diego, California. The American Institute of Architects championed the exhibition as an extraordinary achievement and even organized their national conference to coincide with the exhibition in Philly. By the time museum workers began boxing it up to send on its way to Paris in January 1992, Louis I. Kahn: In the Realm of Architecture had received over 60,000 visitors.

When asked what he thought of the exhibition, almost 30 years later, Mr. Koshalek paused for a moment, as if to consider his words carefully. “I think it was probably the most important comprehensive and scholarly exhibition of the work of Louis I. Kahn that has been done or ever been done on another architect. I really, truly believe that.” 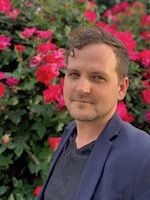