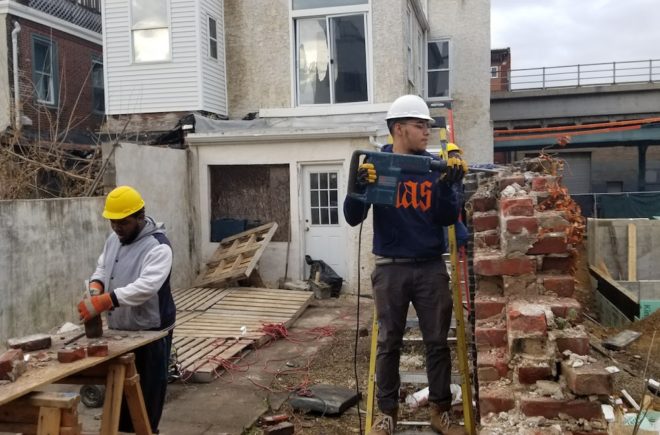 Polls consistently find both environmental issues and job creation at the top of the public’s list of concerns. In a historic city like Philadelphia, an overlay of historic preservation gets added in. Philadelphia Community Corps (PCC) has a growing program that addresses all three issues. The small North Philly-based nonprofit is the home of Philly Reclaim, which receives salvaged construction materials—doors, flooring, windows, hardware, paint, and more—for resale. The tax advantage of donating the materials rather than paying to put them in a landfill provides an incentive for developers to go the so-called deconstruction route, rather than demolition.

Even with the tax deduction, it’s sometimes a hard sell to convince developers to change their methods. “One of the biggest barriers we come across is the developer’s concern of, is this going to slow my project down?” said Kelsey Lee, project manager at PCC. “Time is money, especially these guys who have five, six projects going on at any given time. So when they hear about adding something extra, they get a little squeamish.”

Although he’s a true deconstruction evangelist, PCC founder and executive director Greg Trainor knew he couldn’t spread the word alone about this alternative approach. He enlisted the support of numerous Registered Community Organizations in Philadelphia by attending their meetings and explaining the benefits, so they could advocate for deconstruction when weighing in on development proposals. By completing the Citizens Planning Institute program offered by the Philadelphia Department of Planning and Development, his network of neighborhood contacts grew even larger.

So deconstruction satisfies environmental concerns, along with the preservation of historical architectural materials. But, as PCC saw their roster of deconstruction-friendly builders grow, a new challenge arose: a lack of employable workers trained in the process. Trainor saw it as an opportunity to address the third community concern, jobs, by creating a program to teach deconstruction.

“Our message was, this could be the compromise for environmentalists, for preservationists, for people who want to create jobs,” he explained. “If you’re going to take a building down, do it with deconstruction so we’re saving our history and preserving our landfills and our environment and creating jobs while we do it.”

“At first, Greg thought he’d start his own program, look for funding and find trainees,” said Lee. Then again, Trainor’s networking instincts kicked in. “He reached out to already existing organizations and arranged to take their clients into our program.”

Several of the agencies focus on young people, like the Philadelphia Anti-Drug/Anti-Violence Network’s Youth Violence Reduction Program, which primarily serves youth 14-24 years old who are on probation after having been incarcerated for drug or gun charges, and YouthBuild, which supports 18-21 year olds who dropped out of high school. Other programs that send trainees to PCC include PowerCorpsPHL, the Mural Arts Program, and PA Careerlink. 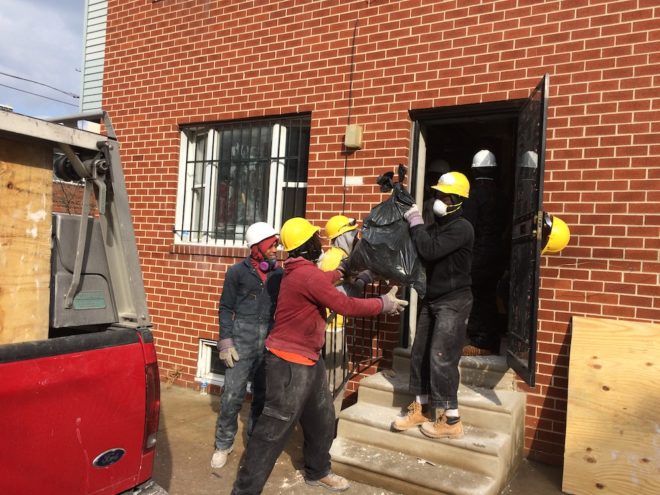 Trainor turned to the trade organization Building Materials Reuse Association (BMRA) for curriculum, developing a program that starts with 80 hours of classroom learning, followed by 900 hours of on-the-job training over the course of six months. Graduates of the program become BMRA-certified as deconstruction technicians. PCC currently accepts about 60 trainees into the program each year, with about half successfully completing the full course.

He touts the practical nature of the program. “The trainees are going out on actual jobs, not just getting classroom training. They’re working alongside contractors, so it’s like a real on-site audition. The contractor will have the opportunity to see if they’re a good, reliable worker or not.”

“In the six months they’re in our program they have the chance to make mistakes as they’re learning, mistakes that they would normally make on the job that would get them fired,” said Trainor. “When they make them here, they can be corrected, and learn not only the technical skills, but also how show up on time, how to be reliable, how to communicate professionally.”

PCC’s training program offers yet another financial incentive for developers, in addition to the reduced landfill fees they pay and the tax deduction they receive for donating the salvaged materials. “When they do deconstruction instead of demolition, they have added costs for the time they spend salvaging things but we’re saving them on the labor by sending out job trainees [who are paid by the job training programs that sponsor them]. It’s definitely been a financially rewarding relationship for them,” said Trainor.

While there are plenty of other training programs and apprenticeships in the trades, Trainor keys in on a unique aspect to learning deconstruction. “If you’re a young person coming up now learning construction, you just have to learn how things are constructed today,” he said. “But in deconstruction, you have to learn 200, 250 years of construction history, technology and tools and methods of doing things. A lot of times that can change within a property, because it was built in 1910 but then renovated in the 50s. You’re undoing a puzzle. It really is a critical thinking exercise. You’re reverse engineering a process of building.”