Al Capone’s Cell At ESP Keeps Conservators On Their Toes 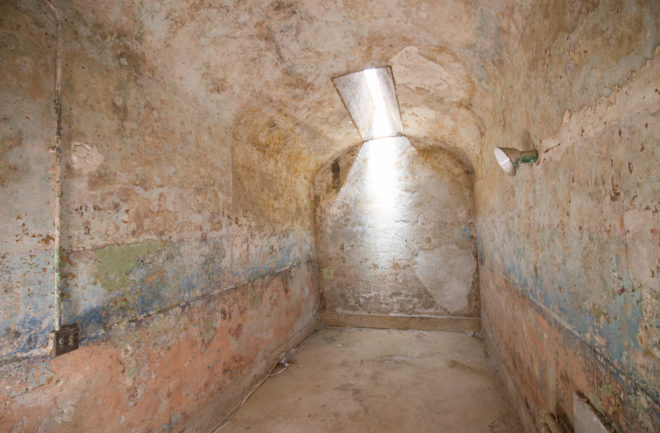 Since September 2018 conservators at Eastern State Penitentiary have been examining the walls inside Al Capone’s cell. The ongoing archeology project has began to reveal much about daily life at the historic prison through layers of old paint, plaster, and building materials. | Photo: Michael Bixler

One of the highlights of the tours of Eastern State Penitentiary is a recreated version of the cell occupied by the prison’s most famous inmate, the Chicago gangster Al Capone. With beautiful rugs, paintings on the walls, an elegant writing desk, and a large radio, it belies the image of a harsh prison environment.

The inspiration for the exhibit came from an article in the Philadelphia Public Ledger, dated August 20, 1929, which illustrated Capone’s luxurious cell at Eastern State with a photograph. “When we furnished the cell 20 years ago, we had a furniture expert read this article and give us suggestions as to what to put in there,” explained Liz Trumbull, Eastern State’s manager of historic preservation and architectural conservation. “They’re not artifacts from the prison, but they are period appropriate.”

But for months, this feature of the historic 19th century prison has been unavailable to visitors, the staff having closed it in January for a restoration project. “We felt like this really fine furniture was in stark contrast to the peeling plaster and peeling paint, and it wasn’t working,” said Trumbull. “The goal was to replaster the walls so the quality of the architectural finishes matched the quality of the furniture.” 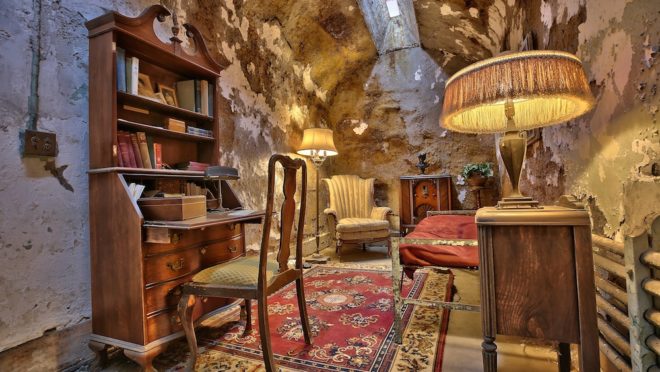 Al Capone’s cell prior to an historic reinterpretation and relocation next door. | Image courtesy of Eastern State Penitentiary

As so often happens in archeological and historical explorations, you sometimes get more than what you expected to find.

This particular cell was constructed differently than most of the other cells at Eastern State, with a layer of wire lath under the plaster. The lath was corroded, so the team from the firm Materials Conservation planned to remove it and replace it with new wire. “As we started peeling it back, we found the wire lath and that layer of plaster were encapsulating and protecting a layer of paint,” recalled Trumbull. “We didn’t know the significance of it. It was interesting enough that we paused the project in order to do research and really dig into what it was that we were seeing.”

“Where we’ve landed, though we still have a lot of questions, is that this is one of the most intact examples that we have of decorative painting at Eastern State, and we think there’s evidence of artistic painting within this cell.”

To piece together answers to some of those questions, they studied this material evidence more closely and then looked for corroborating clues in the historical records. First, the conservators examined cross sections of paint chips under a microscope and discovered over 20 layers of paint. They were able to date the layers based on changes in paint manufacturing methods that occurred after World War II. From that, they surmised that the cell walls were painted in blues and greens for the first five decades or so through the 1920s. 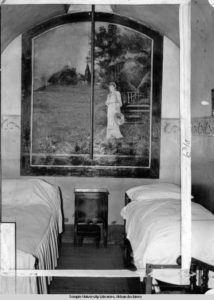 Conservators believe they have found traces of this mural while examining Al Capone’s cell. The photograph above from 1935 shows the cell and one of only a few known prison cell paintings at Eastern State Penitentiary. | Image courtesy of Temple University Libraries, Special Collections Research Center

“When we look at historic photographs of Eastern State they’re all in black and white, obviously, so we’ve always imagined the walls as being white,” noted Trumbull. “It was like our whole imagining of what this space could’ve looked like could be completely different.”

These early layers were followed by evidence of later mural-like painting on the walls, with multicolored borders at mid-height.  To learn more, they turned to archival records, looking for written or photographic evidence about painting at Eastern State. They found a 1935 photograph of a cell wall painted with a mural of a woman set in a pastoral scene. “That showed that people were painting at Eastern State, in their cells,” said Trumbull. “Let’s think about the social history of this place. Does that make sense based on what we know about who was in charge during those times? And from the different wardens that we’re familiar with, we think that yes, a mural could have been painted in the early 1920s because the warden at the time, in his reports, does talk about making sure that prisoners have their own hobbies and interests and things to do to occupy their time.”

As their work on the paint layers in that cell continued, Eastern State’s staff moved the recreation of Al Capone’s cell to the one next door. But here, too, new information has brought some changes.

“We found another article in a different newspaper, published the day after [the article in the Philadelphia Public Ledger],” Trumbull recounted. “It talked about a lot of the same furniture, but tried to emphasize that Capone was not receiving special treatment and that he had a cell mate and there were other people that had more luxurious cells than he did. It suggests that he bought the furniture off the people who lived in the cell before him. So, it actually might not have been as uncommon, more cells might have looked like that.” 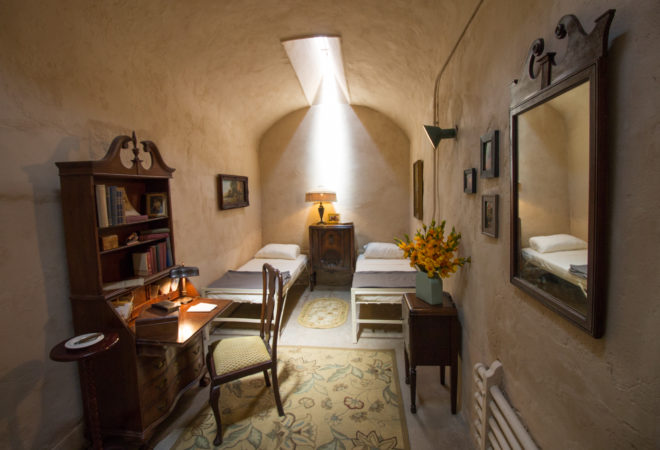 Al Capone’s new quarters next to his old cell is decidedly different than the first interpretation. It was unveiled today with more modest, historically accurate furniture and amenities. | Photo: Michael Bixler

In the new cell, conservators went ahead with the original plan to replaster the walls to better match the fancy furnishings. Although it also had peeling paint that needed to be removed, they didn’t find any more secrets under it. But Trumbull is sure Eastern State has many more mysteries to be solved. “We have so many questions, so it’s been exciting to parse through the evidence and try to understand what these cells might have looked like over time.”

Eastern State Penitentiary will kick off its 2019 season with a reception tonight from 5:30-7:30PM to unveil the newly restored Al Capone’s Cell exhibit and three new site-specific artist installations. The event is free and open to the public. See details HERE.