Public Space Rises From The Stacks At Parkway Central 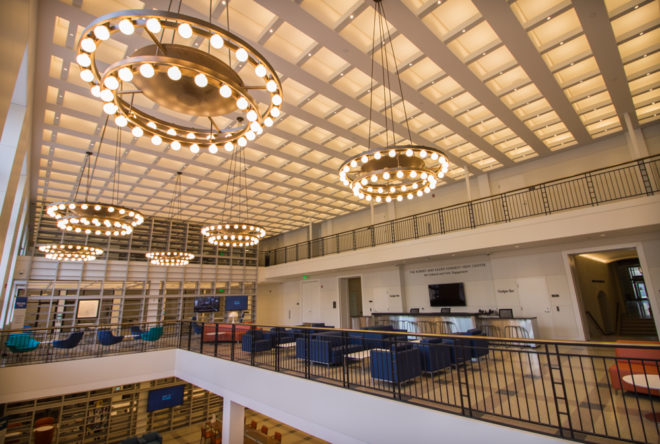 Books not included. On April 12, Free Library of Philadelphia will open three new public spaces dedicated to socializing, business resources, and a place to study and hang out for teens at Parkway Central. | Photo: Michael Bixler

On Friday, April 12 the Free Library of Philadelphia will celebrate the grand opening of three new public spaces at Parkway Central after 13 years of planning and fundraising. The 41,000-square-foot transformation of the library’s old book circulation system, once the beating heart of the 91-year-old research branch, will serve as community centers offering a long list of resources for local businesses, job seekers, event planners, and teens. The $35.8M renovation was designed by the firm of Moshe Safdie, acclaimed Israeli-Canadian architect and a former apprentice of local modernist hero Louis Kahn.

Over 800,000 books were moved from Parkway Central to an off-site retrieval facility in Grays Ferry in 2013. The six-level stacks were then dismantled and demolished in 2017 after the library secured a $25 million grant, the largest gift in the library system’s 120 year history, from the William Penn Foundation. The massive construction project is part of the Building Inspiration: 21st Century Libraries initiative and adds 33 percent more public space to the Horace Trumbauer-designed building with a current grand total of 68 percent. Like many urban library systems across the country the Free Library of Philadelphia Foundation’s mission has dramatically shifted over the last decade from a traditional emphasis on reading and research to contemporary practices of social engagement in an effort to increase funding and visitor attendance. For financial survival focus is placed on creative programing, community resources, and event space with scholarship and books taking the backseat.

On the first floor, the Robert and Eileen Kennedy Heim Center for Cultural Engagement is 7,200 square feet of meeting rooms, soundproof music rooms, and a large seating area for conversation and collaboration. It was furnished with moveable accommodations to provide flexible space for lectures, presentations, and public/private events. A sleek, cunning librarian’s help desk, one of the only pieces of stationary furniture in the room, was specially designed to moonlight as a bar for alcohol service. 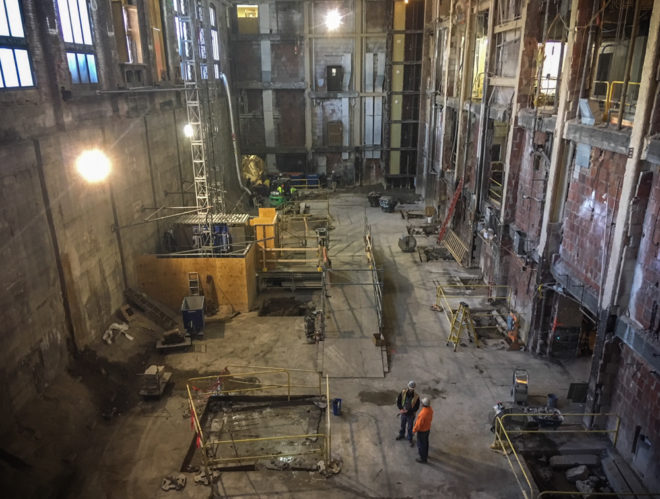 The Business Resource and Innovation Center on the ground floor is the largest room at 8,200 feet. The center will provide services for local upstarts and existing small businesses with patent and trademark consultation and enclosed breakout rooms for meetings. Job seekers can have their headshot taken and their resumes reviewed free of charge by appointment and on scheduled days. The room was also configured to provide after hours party space.

The Marie and Joseph Field Teen Center was exclusively designed for teens to safely and comfortably study, socialize, attend public programs, play video games on a 75-inch HD television, and get a bite to eat between school and home. Out of all of the newly renovated areas, the Teen Center is the only new space that features books to peruse.

Connecting all of the three new centers with the library’s lobby is the William B. Dietrich Grand Staircase, designed to integrate with the existing main staircase. The new stairway was constructed from 14,000 square feet of pink marble salvaged from the original flooring of the library’s old stacks.

A preview of the new public spaces at the Free Library of Philadelphia’s Parkway Central Branch. Photographs by Michael Bixler. 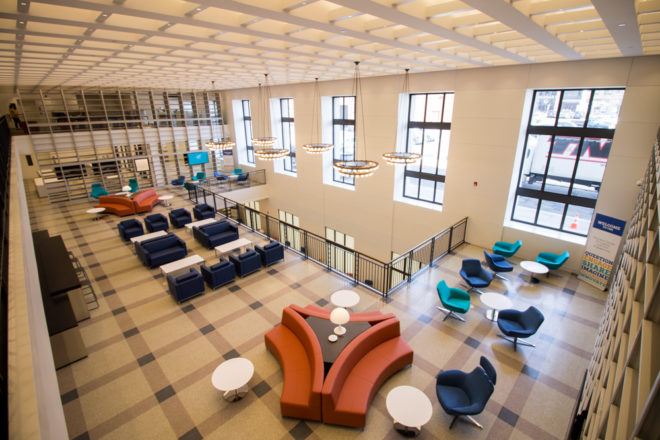 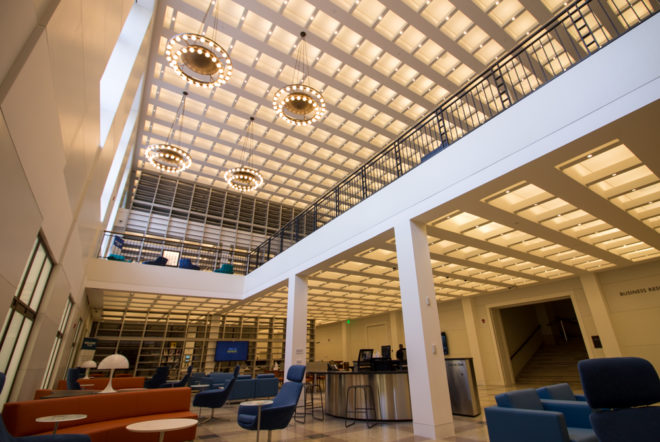 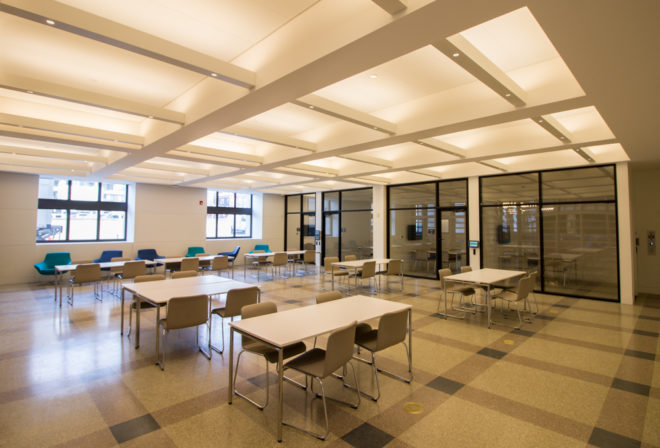 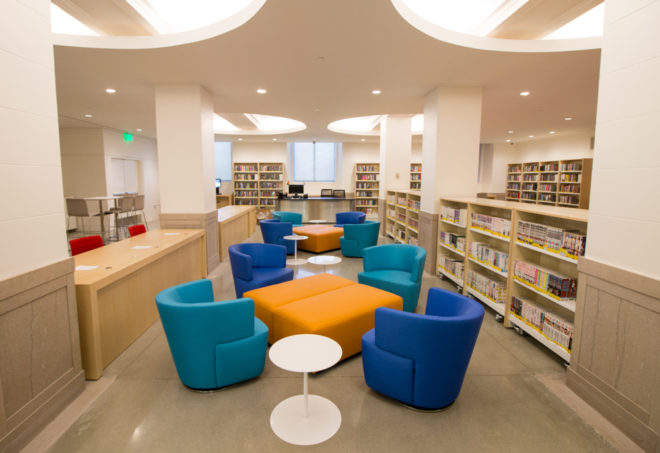 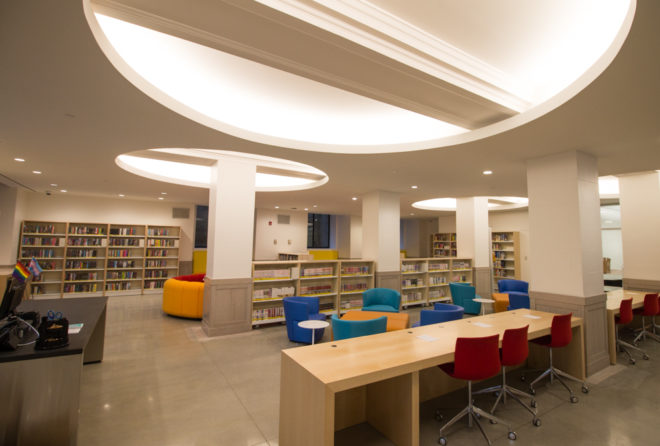 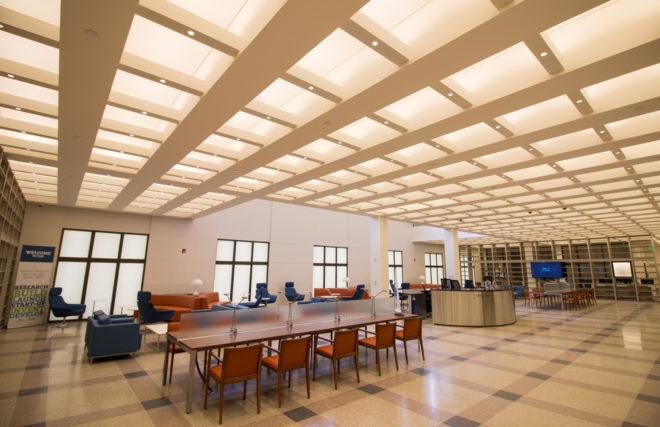