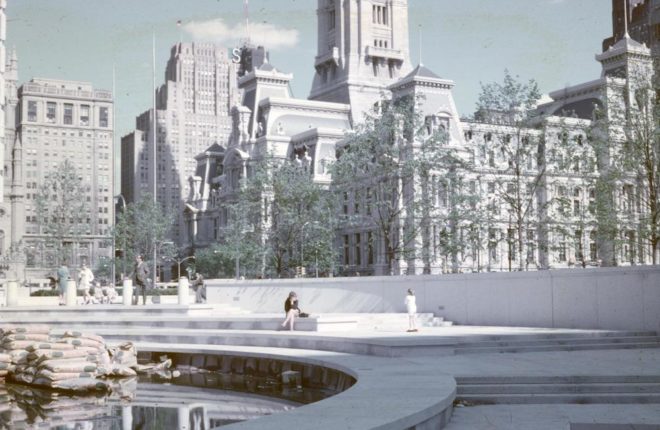 The days of a brave, new Love Park with the fountain still under construction. Date unknown. The Ed Bacon Photo Project is a digital cataloguing effort that will make over 5,000 research and lecture slides from the Philadelphia city planner’s personal collection available to the public online. | Image courtesy of Fisher Fine Arts Library, University of Pennsylvania

For many trained and self-proclaimed urbanists, Philadelphia city planner Edmund Norwood Bacon is a hometown god that gave birth to our modern metropolis. He transformed an Old City “slum” into the unquestionably quaint Society Hill. He helped solidify Philadelphia in our national consciousness as America’s true “Cradle of Liberty” through the creation of tourist-friendly Independence Mall. He cleared neighborhood blight in an effort to reset the city’s ailing economy and deteriorating quality of life during a destructive period of deindustrialization and population decline. He brought bold ideas and daring concepts of an equitable city brimming with vitality to Philadelphia’s struggling urban core.

And yet, others, particularly Jane Jacobs devotees, do not align with deifying a man that severed connecting neighborhoods with major highway projects, displaced impoverished and ethnic enclaves through urban renewal programs, turned huge swaths of contextually-dense Center City architecture into the windy canyons of empty office tower plazas, and often disregarded street life and community planning to fulfill his vision.

The simple truth is there is no simple truth. Much good, and bad, can be said about what Bacon attempted to achieve during his 21-year career as city planner. No matter how you view his most noble of intentions, he made an indelible mark on Philadelphia and we still reap the benefits, and suffer the consequences, of his extraordinary work today.

The Ed Bacon Photo Project, a new online cataloging project by Fisher Fine Arts Library at the University of Pennsylvania, offers an intimate view into the former executive director of the Philadelphia City Planning Commission’s inspiration with a collection of over 5,000 research and lecture slides. Bacon gave his personal collection of images to the library before his passing in 2005. Most of the photographs were taken in Philadelphia, but many span the world. Fisher Fine Arts Library is currently digitizing the collection and has launched a crowd-sourcing initiative asking the public to help identify the locations of each slide. 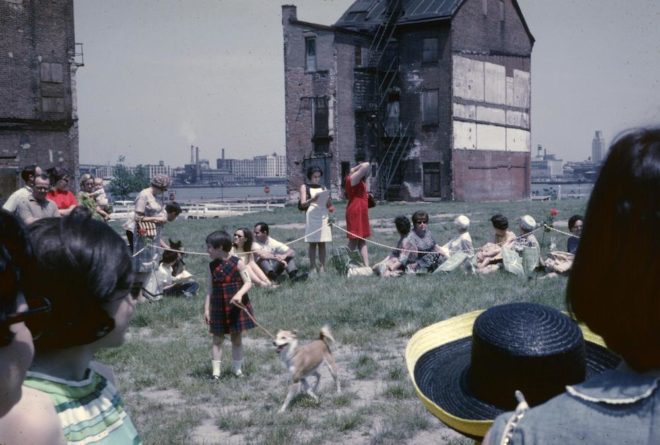 Staff at Fisher Fine Arts Library has called on the public to help identify the location and context of Bacon’s unlabeled photos. One user on Flickr believes that this photograph from the 1960s was taken during a neighborhood dog show on the site of what would become Society Hill Towers. | Image courtesy of Fisher Fine Arts Library, University of Pennsylvania

“Very little is on record about this collection apart from the deed of gift which is strictly procedural,” said Hannah Bennett, director of Fisher Fine Arts Library. “It’s tough to say what Bacon’s ‘curatorial intent’ was in developing the collection as he did. Very little documentation accompanied the donation apart from a handwritten checklist of all the places he traveled between the late 1950s and early 1980s.”

The slides went unprocessed for 10 years and access has remained limited. For archival researchers and Bacon scholars, the collection was either off limits or unknown. Now that the slides are being digitalized viewers can experience the city through Bacon’s eyes as he worked to master plan a more modern Philadelphia.

“Anyone with an internet connection can access this collection, learn about Bacon’s vision alongside his research and designs, and compare that vision documented through the images to what eventually got built, restored, or demolished,” said Bennett. “The collection also offers unique insight into his own ‘visual’ documentation of not just Philadelphia’s buildings, neighborhoods, and city character, but also other capitals, global sites, landscapes, and candid photographs of people.” 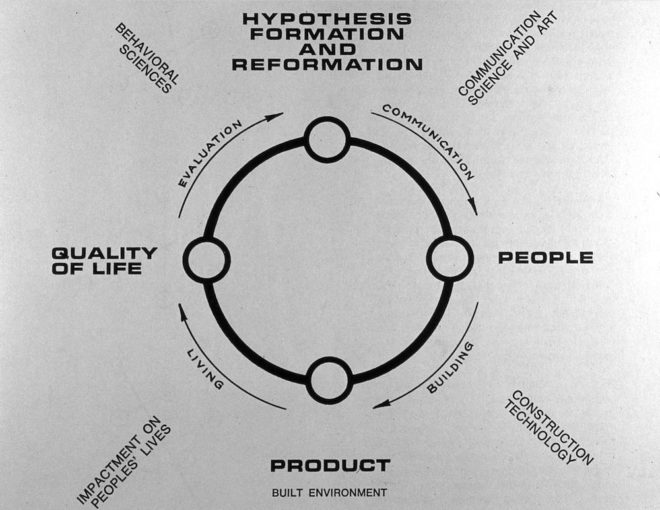 Through numerous photographs taken abroad of fountain-heavy courts, squares, and public commons one can almost see Love Park and Dilworth Plaza percolating in Bacon’s mind. Other images capture rare views of the construction of the Municipal Services Building in Center City and Society Hill Towers on the rise. Old and new get acquainted in a photograph showing Bingham Court, designed by modernist architect I.M. Pei in 1967, turning its back on a block of 19th century Federal-style row houses. A series of odd, irreverent slides show a mystery man dressed in white as he traverses the East Terrace of the Philadelphia Museum of Art, taking time to humorously walk straight through the bronze basin of a wet fountain with his shoes on. Penn Library staff believe, but cannot confirm, that the man is a stand-in for Bacon as he scouted out locations for his Understanding Cities  documentary series released in 1984.

The collection is currently accessible via Flickr as a Bacon-specific image database is being developed by staff at Fisher Fine Arts Library. 955 slides have been posted so far to the photo sharing website. Batches of 1,000 slides will be added as they are processed. The overall collection contains roughly 60 percent of slides showing Philadelphia and Bacon’s research-related maps, artwork, and models. The remaining 40 percent of images are of parts unknown. 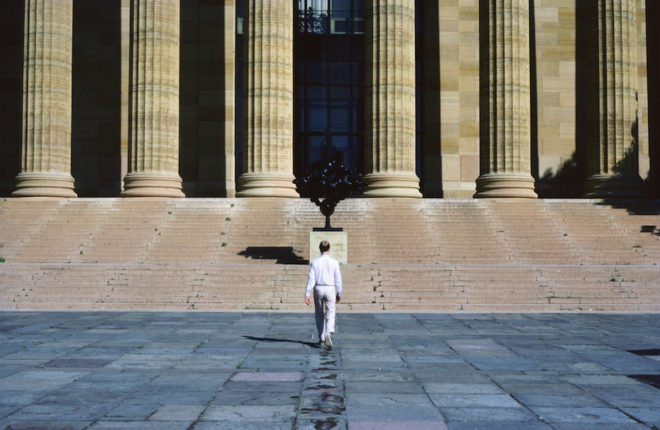 A mystery man, possibly a Bacon stand-in, makes his way towards the east entrance of the Philadelphia Museum of Art after walking through the terrace fountain. | Image courtesy of Fisher Fine Arts Library, University of Pennsylvania

“The end goal is to have all images identified and process in our database. Along with the image, the data will be included, making the collection searchable based on any number of fields–architect, medium, year, location, city, etc.–alongside our other image collections,” said Bennett. “If one were to search our image collection for ‘Philadelphia buildings’ they will get images of paintings, portraits, videos, and other media alongside the Bacon material. Or, they could search the Bacon material on its own. Unlike some of our collections, which, for rights purposes, we have to keep behind a firewall, the Bacon collection will be publicly accessible. “

Bennett said a special exhibition dedicated to Bacon’s work and legacy is currently in the works for 2020 and that the goal is to have the 5,000 slides in his personal collection identified and cataloged by the exhibit’s opening.