Growing Neighborhoods One Tree At A Time On Arbor Day 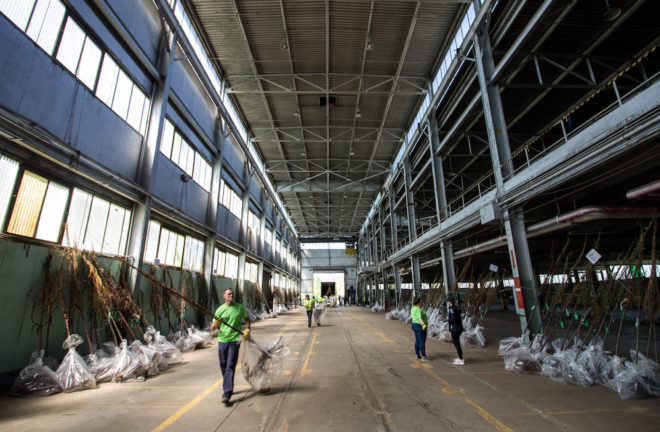 On Wednesday, April 25 the Pennsylvania Horticultural Society received and prepared roughly 800 trees inside Building 611 at the Navy Yard. This weekend PHS volunteers and staff will kickoff a citywide planting of street trees in honor of Arbor Day. | Photo: Michael Bixler

Today is Arbor Day in Pennsylvania and most states. From its first U.S. celebration in Nebraska, where one million trees were planted in a single day in April, 1872, the holiday has since spread across the country as an incentive to grow our nation’s tree canopy.

Philadelphia is celebrating with a weekend of tree plantings in and outside of the city. On Wednesday, the Pennsylvania Horticultural Society (PHS) received nearly 800 trees at its warehouse in the Navy Yard, to be handed off to 61 groups of volunteers for planting on Saturday and Sunday.

Those groups are headed by “Tree Tenders,” who have completed a PHS course to learn the proper planting and care of trees. “Planting is just the start,” said project manager Mindy Maslin. “50 percent of the job is keeping them alive for the first three years or so.”

Philly Tree Map, a crowdsourced project developed by Azavea, lists data on over 58,000 trees in the Philadelphia region. Project manager Deb Boyer said even though it’s not actively managed, the map paints an interesting picture of the distribution and diversity of Philly’s trees.

For much of its existence, the Tree Tenders program planted trees in neighborhoods where it had volunteers. In an effort to be more proactive, PHS staff created their own map to identify priority areas for tree plantings. “We compared a lack of trees, high crime rates, and poverty and decided to focus on those areas,” Maslin explained, citing Hunting Park and Fairhill as two examples.

The first class of Tree Tenders en Español produced 45 graduates, who will plant close to 50 trees this spring in Fairhill and Hunting Park.

“We are hoping that the availability of translated materials will allow additional groups to form,” said David Ortiz, vice president of housing and economic development for Esperanza, which offers programs and services to Hispanic communities in Philadelphia. “Now that there is more awareness of how the physical environment affects health–our neighborhoods have extremely high rates of asthma–maybe this will encourage others to try to increase the tree canopy, reduce the urban heat island effect and utility bills and raise property values at the same time.” 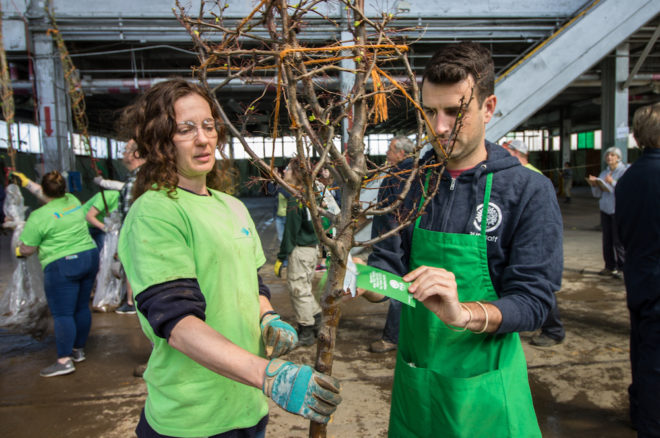 PHS communications manager Kevin Feeley and a volunteer tags a tree with the name of the neighborhood where it will be planted. | Photo: Michael Bixler

There’s no denying the qualitative values that trees offer to an environment, especially among all the concrete, brick, and asphalt of a city. “The attractiveness brings people outside,” Maslin said. “You get to know your neighbors. And with people about, blocks are safer, too.”

But how can the quantitative benefits be measured? For the Philly Tree Map, Boyer and the staff at Azavea turned to a suite of software tools from the U.S. Forest Service called I-Tree, which estimated the amount of carbon dioxide removed from the atmosphere, filtered stormwater, energy conserved, and more. “Of course, you also need site-specific information,” she noted. Nevertheless, the estimated numbers are impressive. Each year the 58,000 trees on the map filter over 100 million gallons of stormwater, remove 27 million pounds of carbon dioxide from the air, and save nearly $8 million in energy.

And those numbers will certainly keep increasing. PHS’s Tree Tenders program has quite a bit of company in the planting and caring of trees. Philadelphia Parks and Recreation offers yard and street trees to residents through its Tree Philly program, the Philadelphia Water Department includes trees in some of the offerings in its Rain Check stormwater management program, and the Pennsylvania Department of Natural Resources runs its TreeVitalize program. The Philly Tree Map also tracks empty tree pits i.e. sites already cut into the sidewalk that could accommodate a tree. Those number in the tens of thousands, so there’s plenty of room on Philly streets for all these programs to keep planting.

Volunteer planting crews will be out in dozens of neighborhoods on Saturday and Sunday. Find planting events in your area.

The Pennsylvania Horticultural Society offers its Tree Tenders course twice annually in May and September.