For Callowhill Neighborhood, Whose BIDing Will Be Done? 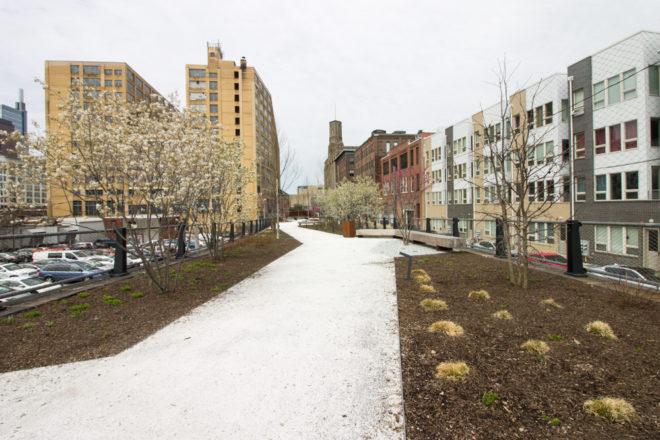 The city’s best new public space or a Trojan Horse for real estate investors. Some residents of Callowhill worries that the Rail Park will become a driver of displacement and that the creation of a development-minded Business Improvement District will prohibitively increase rent and property taxes. | Photo: Michael Bixler

Chinatown North? Callowhill? Spring Arts? Loft District? Eraserhood? In a neighborhood that can’t agree on what it should be called, how will they decide who, if anyone, should have the power to tax and spend in the name of business and community development?

That has been the dilemma for this neighborhood on the northern edge of Center City for nearly a decade. In 2012, residents defeated a plan of the Callowhill Neighborhood Association (CNA) to create a Neighborhood Improvement District. It would have assessed a fee on each property in the area and used the funds to provide services such as street cleaning, improved lighting, and greening. Now, CNA is giving it another go, joined this time by developer Arts + Crafts Holdings, which, over the past four years, has bought up 20 buildings in the area.

Cleaner streets, beautification projects–what’s not to like? From Chestnut Hill to South Philly’s sports complex, the city is already home to over a dozen of these arrangements, the most powerful and visible being the Center City District. Tired of trash-strewn streets and unlit corridors, residents want improvements, even if they have to pay for them. But others say they are already paying for those services, via property taxes, so why should they be forced to pay again? 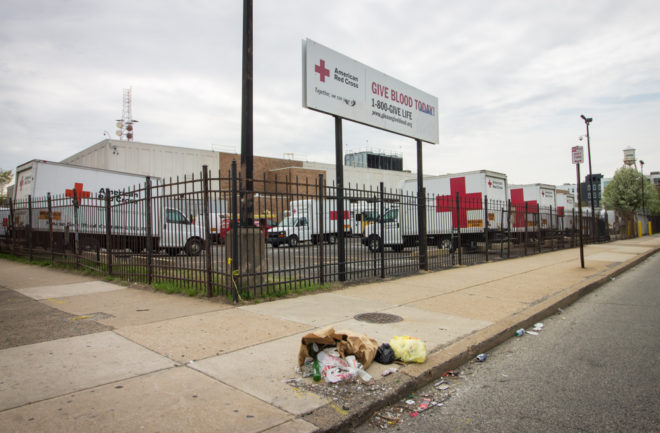 Illegal dumping has been a decades-long problem in Callowhill. Although the neighborhood has seen a decrease in litter in recent times, this pile of trash at 8th and Spring Garden is a reminder that bad habits remain. One of Callowhill Neighborhood Association’s goals with creating a Business Improvement District is to keep the area clean with funds allocated from home owners and businesses. | Photo: Michael Bixler

On March 27 and April 8, those differing opinions were heard at meetings about the proposal, now called the Callowhill Business Improvement District (BID). But to pay or not to pay isn’t the only divide in this neighborhood. It has a complex overlay of long-time residents vs. newer, widely varying socioeconomic levels, language differences, a checkerboard of industrial, residential, vacant, commercial and big condo properties, and, although nearly everyone who brings it up hedges with a disclaimer, racial differences.

In the hearts and minds of many Chinatown residents, much of this area belongs to their neighborhood, despite being separated by the construction of the Vine Street Expressway in the 1980s. They feel excluded by the Callowhill Neighborhood Association, who, in turn, say Chinatown residents have not seemed interested in working with them.

As a result, the Philadelphia Chinatown Development Corporation (PCDC) has begun planning its own BID. “Our community members have expressed concern over a lack of transparency with the Callowhill BID,” explained Lamei Zhang, PCDC’s projects manager, citing CNA’s outreach efforts which, until recently, did not include Mandarin translation, and to the BID’s steering committee and proposed board, which PCDC feels does not represent their community.

“We are committed to the board reflecting the community within the BID boundaries,” countered Sarah McEneaney, CNA’s president and a member of the Callowhill BID’s steering committee. 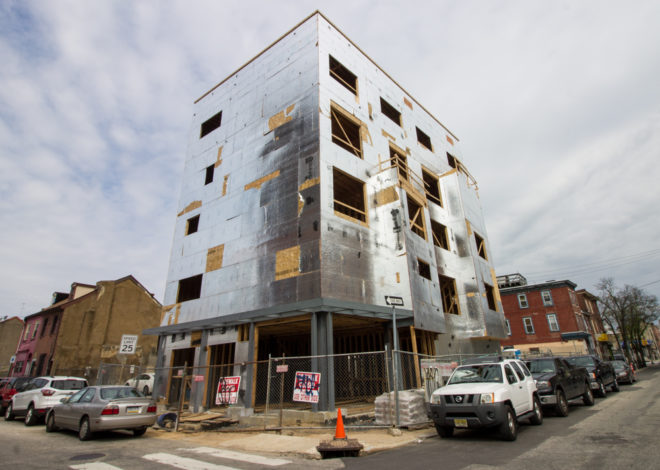 Little pockets of new residential construction like this project at 10th and Buttonwood are beginning to pop up around Callowhill, signaling a forthcoming real estate development boom in the old industrial neighborhood. | Photo: Michael Bixler

“The goals of PCDC and Callowhill Neighborhood Association are different,” said Chinatown activist Maria Yuen, noting that the issue of affordable housing, a hallmark of PCDC’s work, is absent from the Callowhill BID’s concerns. She says a growing number of young people can’t afford to live in Chinatown where their families are.

“Gentrification is happening everywhere,” Yuen said. “But by buying up properties, Arts + Crafts Holdings is accelerating it here.” To some, the most prominent emblem of encroaching gentrification is the Rail Park and its remaining phases of development winding through the area. While most would agree the transformation of its decrepit and hulking elevated Reading Railroad tracks would go a long way in beautifying the neighborhood, many longtime residents fear it will increase the influx of “outsiders” and further escalate housing costs.

Despite claims of wanting to work together, the two sides remain far apart in their visions for the neighborhood. “Our passions and desires come from different places,” said Yuen. 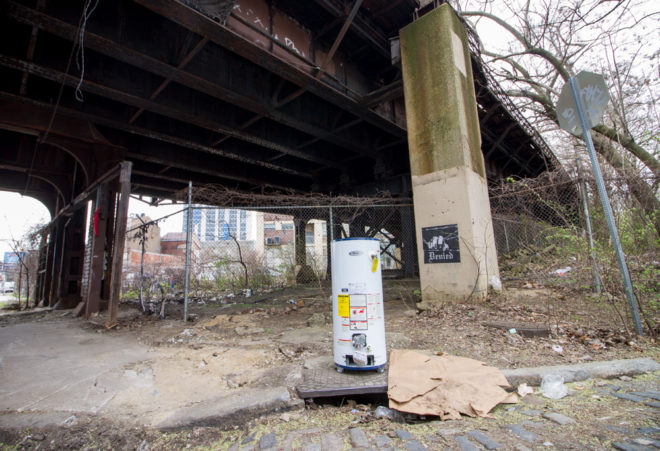 This discarded water heater dumped under the Rail Park sits feet away from a potentially full and combustable propane tank. | Photo: Michael Bixler

CNA recently hired consultant Renee Gilinger, who has shepherded the creation of BIDS in other Philly neighborhoods and served as the executive director of the East Passyunk Avenue BID for seven years. Although the city can’t authorize BIDs in overlapping areas, Gilinger believes PCDC and CNA could each address their own concerns and provide complementary services to the neighborhood they share, noting the Germantown Special Services District and Germantown United Community Development Corporation as an example.

“I have been trying really hard to get them together in a meeting with [Councilman Mark] Squilla,” she said. “I feel like everyone’s intentions are good.” Given how long this battle has been waged, and how far apart the visions are, she may be alone in that assessment.

The next step for the Callowhill Business Improvement District will be a public hearing in May, which will mark the start of a 45 day period in which objections can be submitted. If objections are filed by one-third or more of property owners in the district, as measured either by number of properties or valuation as measured by the City’s Office of Property Assessment, creation of the BID will not proceed. According to Lamei Zhang, the Philadelphia Chinatown Development Corporation’s proposed BID is in the early planning stage.