Interior Of 30th Street Station To Be Considered For Historic Designation 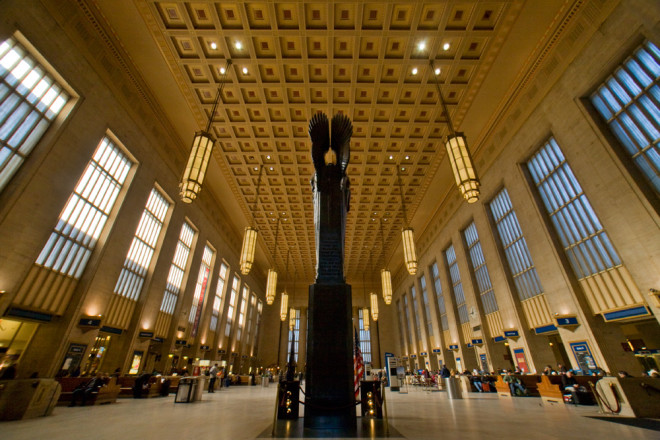 The interior of 30th Street Station has been nominated for historic designation. This image from 2015 shows the station’s brass pendant lamps and the 28-foot statue, Angel of the Resurrection, by sculptor Walker Hancock. | Photo: Bradley Maule

The Philadelphia Historical Commission’s Committee on Historic Designation will meet on Tuesday, March 12 to consider recommending nominations for potential placement on the Philadelphia Register of Historic Places. Once a building is recommended by the Designation Committee the nomination will go before the full Historical Commission at a future public hearing. 10 nominations are on the docket, including a nomination to designate sections of the interior of 30th Street Station. There are currently only three building interiors in the city legally protected by the local register.

The monumental Beaux Arts passenger train station was built by the Pennsylvania Railroad and completed in 1933. According to the nomination, submitted by the Preservation Alliance for Greater Philadelphia, 30th Street Station is “one of the most significant and best-preserved monumental railroad stations in America and one of the most iconic architectural spaces in the city.” The station embodies the prevailing architectural styles of the time, blending an austere take on monumental Classical Revival style with “forward-thinking art deco accents.” It was designed by the prolific Chicago-based firm Graham, Anderson, Probst & White. The station was placed on the local register in 1980 granting legal protection to the exterior.

Designating the interior would protect the sections of the station that are open to the public from substantial changes or alterations. The nomination identifies the numerous historic finishes, features, and fixtures worthy of recognition, including: the hefty travertine limestone columns, coffered plaster ceiling, oak and marble benches, dramatic brass pendant lamps in the main concourse, various signage, and the 28-foot statue, Angel of the Resurrection, by sculptor Walker Hancock. For those who have been following the saga of the replacement of Amtrak’s Solari split flap board with a new digital screen, the original sign was not included on nomination’s list of contributing features.

Philadelphia’s Historic Preservation Ordinance allows for the designation of public interiors of buildings, provided that the space “is, or was designed to be, customarily open or accessible to the public, including by invitation.” 30th Street Station is the second nomination for an historic interior submitted by the Preservation Alliance in the past year. If listed, the station would be the fourth interior granted such protection, joining Wanamaker’s Grand Court, the City Hall Council Chambers, and the Family Court Building.

The three buildings that comprise 4100 Chestnut Street are all that remain of the PRPRC facility, which once occupied the entire block. According to the nomination, the PRPRC was one of the first and most successful passenger railway companies in the city. Because horse-drawn cars required extensive support, facilities were large and housed multiple functions. The three structures that still stand today were used for offices, storage, repair shops, a car house, stables, and hay loft. 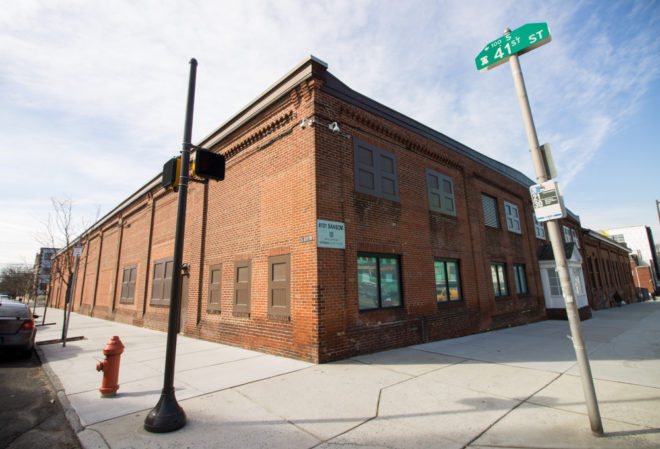 Both the interior of 30th Street Station and the former Philadelphia City Passenger Railway Co. car house & stable at 4100 Chestnut Street have been recommended by Philadelphia Historical Commission staff for designation.

The Keeping Society of Philadelphia has also filed two nominations for neighboring buildings connected to the Peter Woll & Sons Manufacturing Company at 173 and 152-78 Berks Street in Kensington. The company manufactured curled hair, bristles, and feathers–byproducts of other agricultural and manufacturing industries that were then processed and used primarily for upholstery and furniture. The two structures are the last remaining of five that used to house the company’s operations in the early 20th century.

The nominations explains that each building is significant in connection with the industrial heritage of Kensington. The low-rise, utilitarian warehouse 152-78 Berks Street dates back to 1886 and is notable for a large ghost sign which spans the building and reads in all caps: PETER WOLL & SONS MFG. CO. CURLED HAIR. 173 Berks Street is an unusual, five-story warehouse with another distinctive ghost sign painted on a water tower that extends past the roof line.

The written recommendation of the Historical Commission’s staff states that, while the two buildings share the same historical associations, the firm’s history is “better memorialized and conveyed by the building at 173 W. Berks Street.” Although the agency does suggest that the full Historical Commission consider designating the facade of 152-78 Berks Street that retains the old sign, the staff  “questions the value to the public of compelling a private property owner to retain and preserve a nondescript, modest industrial building of low integrity and limited reuse potential in perpetuity.”

Another industrial landmark in Kensington that will be considered is the Otis Elevator Company Boiler and Engine House at 1045-49 Sarah Street, nominated by The Keeping Society of Philadelphia. The structure was built by Morse, Williams & Company in 1904 and was occupied by Otis Elevator Company from 1906 to 1943 when the company took over the complex. The Boiler & Engine House is a detached, gable-fronted brick powerhouse and is part of a larger complex of buildings, several of which were listed on the local register in 2015 and 2016.

The following are also up for review by the Designation Committee:

The Tacony Club at 4619-25 Longshore Avenue was nominated by Alexander Balloon. The brick corner building was a purpose-built social club designed in the Italian Renaissance Revival style. Construction was completed in 1908.

The Immaculate Conception of the Blessed Virgin Mary Roman Catholic Church and Rectory, built between 1870-71, are both nominated by The Keeping Society of Philadelphia. The church, which sit on Front Street between Allan and Pollard Streets in Northern Liberties, was designed in the Lombard Romanesque style by celebrated ecclesiastical architect Edwin Forrest Durang.

St. Leonards Court at 3819-31 Chestnut Street consists of a complex of historic structures that were either built or repurposed by the Society of the Holy Child Jesus for use as a Catholic convent and parochial school from the late 19th century to 1924. The complex was nominated by the Preservation Alliance for Greater Philadelphia.

The Chapel of the True Cross and Saint Michael/Drexel House, both located at 10800 Knights Road, were nominated by Celeste Morello for their architectural significance and association with the Drexel family. The chapel was designed by architect George I. Lovatt, Sr.

Boxwood at 156 W. School House Lane was the suburban stone residence and stable of Robert Bowne Haines Jr. and Mary West Huston Haines. The home was nominated by the Penn-Knox Neighborhood Association.