Industrial Design Firm Has A Knack For The Clickety-Clack 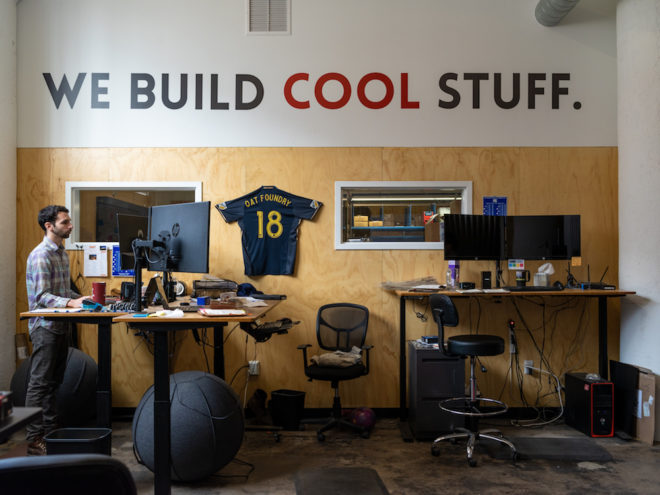 Days after graduating from Drexel University in 2013 a group of six mechanical engineers founded Oat Foundry, a self-funded, creative design and manufacturing firm. Its motto, “We Build Cool Stuff,” is painted in big letters on the wall of the firm’s design space, embodying the spirit and drive of its business model. Starting out on a shoestring budget was a risk the group was willing to take as it found a niche in two specific areas: product engineering and creating custom, contemporary versions split flap signs like the one that was recently dismantled and replaced with a digital sign at 30th Street Station. The unconventional narrative of this homegrown startup was amplified by the firm’s decision to move its headquarters from Bensalem to Building 208 at the old Frankford Arsenal complex in Bridesburg. Real estate investment company Alliance HSP is currently adapting six buildings for commercial reuse at the 203-year-old former military munitions production site. 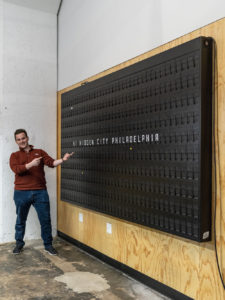 Oat Foundry is perhaps best known for their retro split flap signs. The mesmerizing visuals and clickety-clack sound of the these signs were most familiar to travelers in Philadelphia at 30th Street Station until Amtrak’s Solari board was replaced last month. Companies from Germany to Mexico City have hired Oat Foundry to create custom split flap signs. The firm is currently the only known manufacturer of these type of signs in North America. One of its largest orders in recent years came from The Canadian Brewhouse in Saskatchewan, Canada. Two split flaps were made in Philadelphia and shipped up north measuring in at 6-foot tall and 10-foot wide.

Oat Foundry’s hand-built split flap signs vary in complexity, size, and price. They are mechanically complex and each gear and flap is made by hand. The electronic brain behind the sign can be controlled with a smartphone. Clients and visitors to the workshop can see firsthand the testing of the signs on the original prototype that spans almost an entire wall. Here engineers track the performance and test the break in cycle to ensure that the signs can be programmed almost immediately from a cell phone.

The firm’s split flap signs have been installed all over the United States, from Wrigley Field in Chicago to the Moxy Hotel in Chattanooga. Here in Philly, you can see a sign in action at Shakespeare & Co. bookstore on Walnut Street and others at Honeygrow restaurant locations. The owners of Honeygrow wanted to try split flap signs instead of the default TV-monitor signage to display the status of in-house orders. The restaurant chain liked them so much they commissioned 20 split flap signs in 2017. 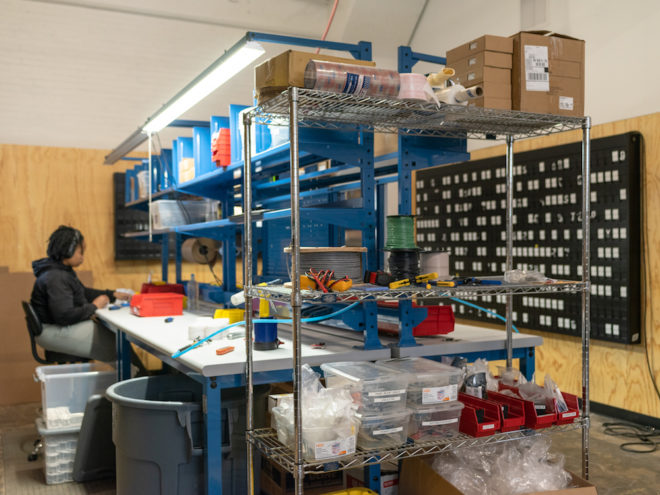 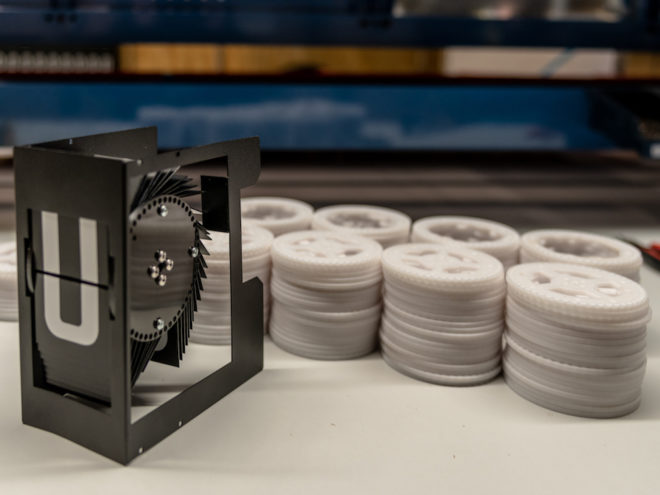 This spring, two more split flap signs are scheduled for installation locally. One will be prominently displayed inside Citizens Bank Park’s new restaurant, Pass & Stow, just in time for the season opener. Oat Foundry specifically designed this sign to display scores during games at Citizen’s Bank and also pull other baseball scores and stats from the MLB’s API feed. A new custom-made split flap will also be installed this spring at the member entrance of the Fitler Club on Market Street.

But the one split flap sign that everyone is talking about is Amtrak’s old analog board at 30th Street Station. Social media and the press erupted earlier this year over the removal of the sign. Two prominent proponents of the train schedule board, the Inquirer’s architecture critic Inga Saffron and Congressman Brendan Boyle, have both voiced their support for repairing the original and returning it to 30th Street Station or reproducing something similar. The original sign was installed in 1971 and made by Solari, an Italian sign manufacturer. It is currently being stored at the Railroad Museum in Strasburg, Pennsylvania. The beloved sign was replaced by a silent digital sign akin to a cheap computer monitor in February, a far cry from the clickety-clack of its snappy predecessor. Oat Foundry has met with Amtrak over recreating the Solari sign and both sides have expressed interest in working together. However, due to the ongoing exterior and interior renovations at 30th Street Station, the design and manufacturing at that scale could take up to two years to produce should an agreement be made. 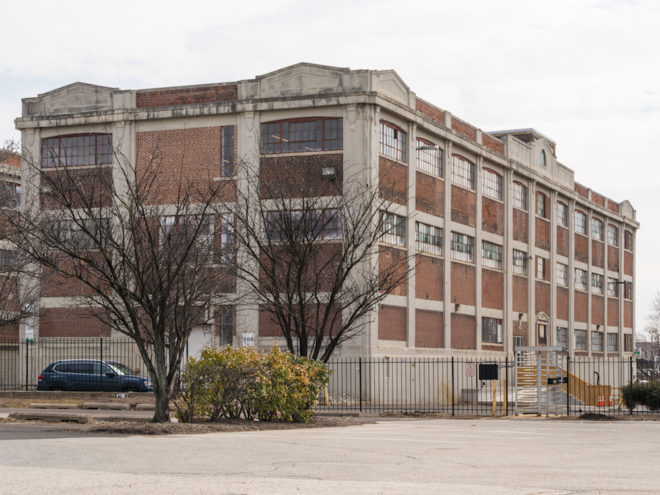 Building 208 is one of six buildings at Frankford Arsenal being renovated by Alliance HSP. The real estate investment company is focusing their marketing to attract startups, designers, and light manufacturing firms like Oat Foundry. | Photo: Theresa Stigale

Oat Foundry is Alliance HSP’s first commercial tenant at Frankford Arsenal. The industrial design firm’s new 5,000-square-foot space allows it to operate a specialty fabrication shop and production facility within arm’s reach of its design offices. The workshop houses a collection of both vintage and modern machinery. Mark Kuhn, the CEO of Oat Foundry, says that its shop is unique to a typical engineering firm and that the company has the in-house capabilities to handle all aspects of product design. The company’s initial services start with an assessment of everything that would be needed to create a physical product from an idea: procurement research, engineering, prototypes, and actual fabrication. Kuhn says that customers appreciate the value of interacting with just one vendor, as opposed to hiring individual teams for each phase of production.

Product design can sometimes lead to unique one-off projects like the “Latte Launch” Oat Foundry created for La Colombe coffee company. While working with Todd Carmichael, CEO and founder of La Colombe, on various machine designs and prototypes, he had the idea to put a can of the company’s new canned latte in outer space, literally, by launching it over 100,000 feet into the stratosphere. Oat Foundry took the wild idea, designed a weather balloon, and rigged the apparatus with a video camera to record the whole event. In the process, the two firms created a viral marketing campaign and lots of attention.

Alliance HSP is seeking to attract startup companies like Oat Foundry to Frankford Arsenal and is marketing the campus as a future industrial design hub. The site’s buildings have large, open floor plans, oversized windows, and soaring ceilings that are ready-made for raw work space. Kuhn and his colleagues at Oat Foundry embrace Frankford Arsenal’s industrial history and believes that it will play a part in Philly’s niche manufacturing revival. “Back during the wars nearly everyone in Bridesburg worked here making ammunition and clocking in and out by steam whistle,” says Kuhn. “We are proud to continue this tradition of Philadelphia-based manufacturing. Everything starts here in Philly and our products are shipped out all over the world.”