Game Over For 70s-era Stadium Hotel In South Philly 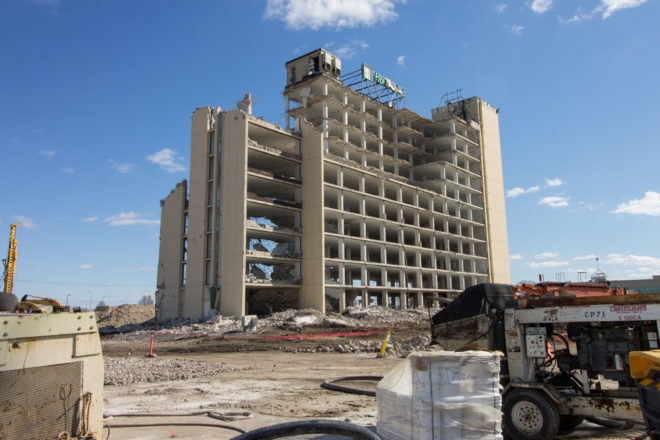 Down comes the old Hilton Inn at 900 Packer Avenue. The 45-year-old hotel is being cleared for a 1.5-million-square-foot casino and entertainment resort next to the South Philadelphia Sports Complex. | Photo: Michael Bixler

Sports fans, rock bands, and concertgoers partied there. Elvis Presley liked to hang his rhinestone jumpsuit there. A wine distributor went belly up in bankruptcy, and a Philadelphia Eagles quarterback launched a successful second career there. The old Philadelphia Hilton Inn next to the South Philadelphia Sports Complex on Packer Avenue has seen its fair share of action since it opened in 1974. But the late modernist hotel, last operating as a Holiday Inn, didn’t stand a chance against gaming tables, slot machines, and high-end excess. The 240-room tower is currently being demolished to make way for Live! Hotel and Casino Philadelphia. After SugarHouse Casino on Delaware Avenue, it will be the city’s second gambling destination to open since Pennsylvania legalized casinos in 2004.

The proposal to redevelop the nine-acre site for a betting and entertainment resort was announced in 2012 by Stadium Casino LLC, a partnership between The Cordish Companies and Greenwood Gaming & Entertainment Inc. Cordish, a 109-year-old entertainment and real estate development firm based in Baltimore, and Greenwood, owners and operators of Parx Casino in Bensalem, were granted a gaming license (one of only two issued to Philadelphia by the Pennsylvania Gaming Commission) in 2014 following Foxwoods Casino’s failed attempt from 2008 to 2010 to secure funding for a casino in the heart of Center City at The Gallery. 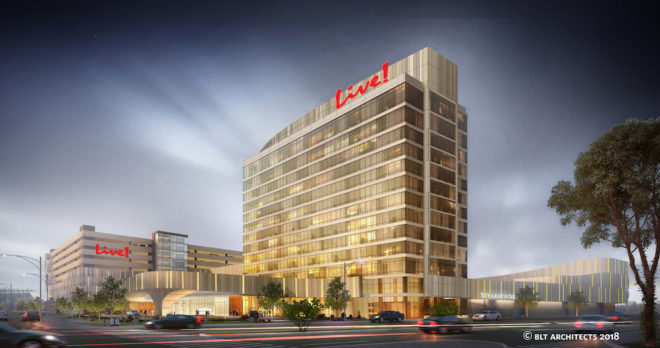 Plans for Live! Hotel and Casino Philadelphia have been a long time coming. With building permits and a gaming license in hand, the $700 million project is currently the most expensive construction project in the city. | Rendering: BLT Architects

Stadium Casino, LLC purchased the property on Packer Avenue for $37 million. The partnership received a building permit from the Department of Licenses and Inspections in January 2018 after SugarHouse dropped a three-year legal battle to block its gaming license based on a state law that prohibited investors from owning more than one-third interest in a second casino in Pennsylvania. The suit was rendered moot in November 2017 when Governor Tom Wolf signed a statewide gaming expansion bill that authorizes multiple casino ownership, internet gambling, video gambling, and interactive gambling parlors in airports. Cordish, which built and operates Xfinity Live! with Comcast Spectacor, bought out Greenwood and acquired full control of the stadium casino project in November 2018. The company was granted a two-year extension on its operations launch deadline and anticipates the first phase of the long-stalled project will be completed by December 2020.

As expected, the plans for Live! Hotel and Casino Philadelphia are over-the-top. The $700 million sports and entertainment resort—currently the most expensive building project in the city–includes the construction of a 1.5-million-square-foot facility. It includes a boutique hotel with over 200 rooms, six restaurants, a 10,000-square-foot live entertainment venue with a rooftop party deck, 2,200 slots and electronic games, 150 live action table games, 33 poker rooms, and a parking garage with 2,700 spaces. The casino complex was designed by BLT Architects. Gilbane Building Company has been selected as the general contractor. According to Cordish, the new casino will generate roughly 3,000 construction jobs, $2 billion in economic stimulus for Philadelphia, and $100 million in tax revenue by 2025, with $25 million going to the School District. 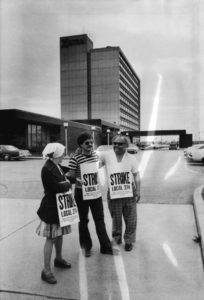 Employees of the Hilton Inn picket the hotel during a strike in 1977. | Image courtesy of Temple University Libraries, Special Collections Research Center

The original plan for the gaming resort called for retaining and renovating the Holiday Inn, but the building sits smack dab in the middle of the project site. Reusing the old hotel conflicted with the developer’s vision for a sprawling gaming floor unfurling from one end of the parcel to the other. Instead, a new tower will be built at the complex fronting Packer Avenue with the parking garage anchoring the opposing end.

The Hilton Inn was built in 1974 for $7 million by a consortium led by Bankers Securities Corporation, a now-defunct investment firm founded in 1927 by Philadelphia retail and real estate magnate Albert M. Greenfield. After operating at a loss for two years and facing foreclosure, Armand Ceritano, a local wine distributor, took a controlling stake in the hotel in 1976 and quickly drove the operation into bankruptcy.

Elvis and his entourage often stayed at the hotel while on tour performing at the nearby Spectrum. On June 28, 1976, the King booked out multiple rooms and played a Bicentennial show where, according to WXPN, he walked out on stage to the theme from 2001: A Space Odyssey and then stumbled through a surreal 22-song set in just one hour.

Scandal-prone Colonial Real Estate, an investment firm from Connecticut, bought the Hilton Inn in 1985, but the company folded in 1992 after its founders became the subjects of a criminal inquiry led by the FBI and IRS and its chief financial officer committed suicide while facing federal grand jury charges for embezzling $6 million. Hilton terminated the stadium hotel’s franchise agreement after it went into a second bankruptcy. It was renamed, ironically, the Philadelphia Court Hotel.

Former Philadelphia Eagles quarterback Ron Jaworski bought the building in 1993 and reopened it as a Holiday Inn. The hotel closed for good in January 2018 in preparation for a liquidation sale and the building’s pending demolition.

Check out time at the old Hilton Inn on Packer Avenue. Photographs by Michael Bixler. 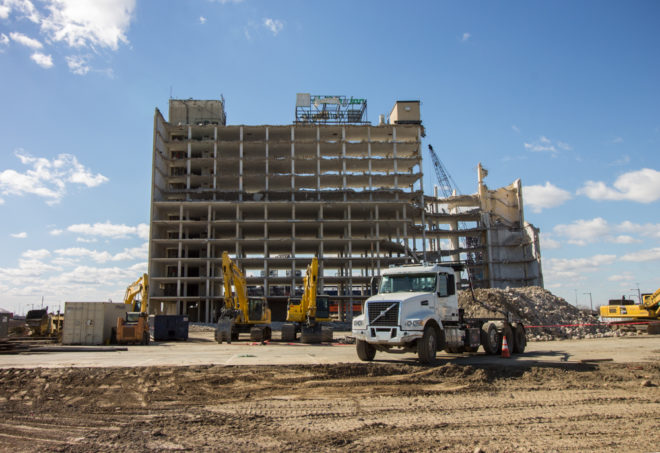 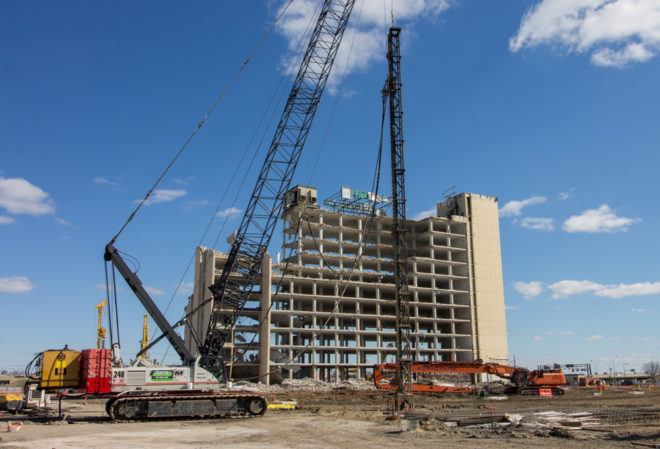 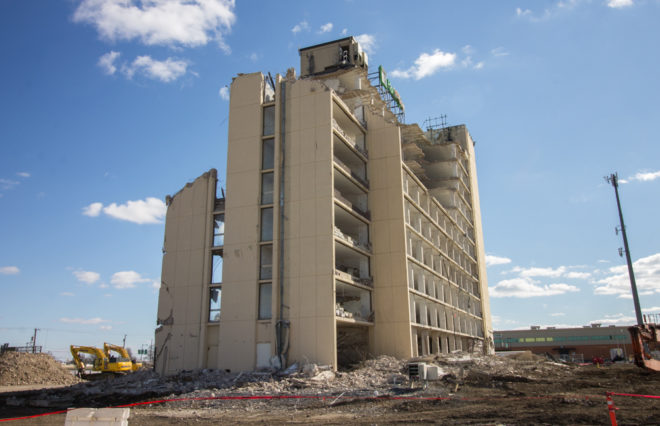 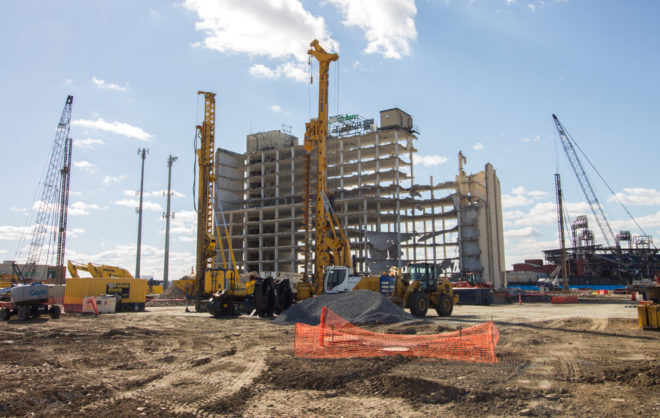 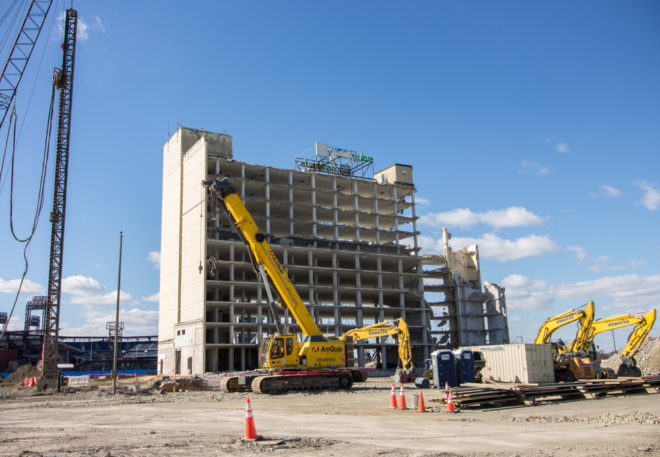