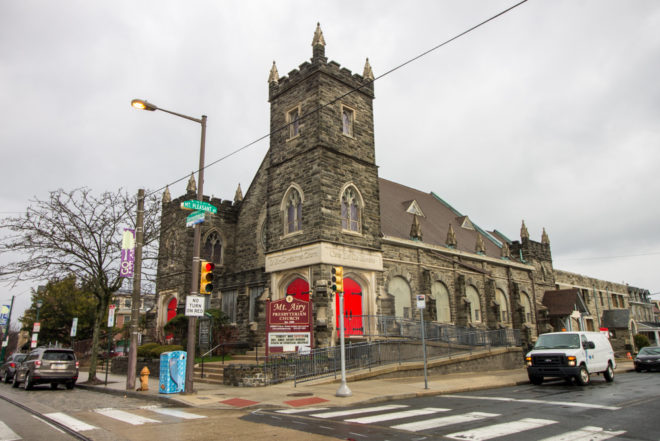 Bancroft Green has been engaged in eco-friendly building practices and sustainable construction since 2008. The real estate development firm, owned by brothers Scott and G.C. Seibert, leaves a soft carbon footprint as it delivers new single-family homes and condominium projects across the city. The company’s growing portfolio includes several adaptive reuse projects and is currently converting Mt. Airy Presbyterian Church at 7111 Germantown Avenue into a 19-unit residential building in partnership with developer Ken Weinstein.

The original section of the sprawling church complex was built in 1884 and designed by architect George T. Pearson. It stands in the center of the property and was once a single-story church with an A-frame roof. The stone sanctuary on the corner of Germantown Avenue was also built in 1880 and will remain untouched by the project. The gymnasium on the second floor was added in 1905, along with the lower level’s classrooms, cafeteria, and auditorium stage. A second story was built in the 1950s.

The entire church complex sits on an acre of land spanning the block between Durham Street and Mt. Pleasant Avenue with entrances on all three sides. The church sanctuary will remain open with an active congregation, while the rest of the building is being repurposed into living spaces. “Whenever possible, we like to find a way to breathe new life into existing structures that have served the community already,” said Scott Seibert. “When I can reuse a building it’s one less obstacle in terms of community acceptance, because the building is essentially staying the same.”

Bancroft Green is working with BWA Architecture to create an addition that is contemporary, yet mindful of the building’s original form. Their renovation places a heavy emphasis on sustainable building. The older, leaded windows will be replaced with energy efficient glass. Much of the original flooring will be reused, including the hardwood in what was the gymnasium. Formaldehyde-free bamboo will be used to replace other sections of flooring. All units will include clean HVAC systems, hybrid water heaters, and low-flow kitchen and bathroom fixtures.

Side view of the church and a new addition along Mt. Pleasant Street. | Rendering: BWA Architecture

“Mt. Airy needs sustainable, green construction. This whole building will be Energy Star certified. When it can work, it’s usually to great effect finding a new life for buildings that served a purpose. If you can do that it’s to the betterment of the community,” said Seibert.

A few surprises were discovered while removing parts of the building. Uncovering forgotten windows from the original 1880s section long covered by plaster and other lost details has been a perk. There are many challenges of the working on a building that was constructed in phases. Seibert has gone to great lengths to keep much of the stone walls exposed to tell the story of the building’s original design and construction.

“One thing that I’m trying to keep exposed and still meet fire and sound codes are these really cool bar joist and pine tongue-and-groove ceilings on the top level. They really make the spaces pop,” said Seibert. “I didn’t realize how beautiful they were and that they were so extensive. We’ll keep those in some of the living rooms and dining rooms. Spatially, it’s going to be really nice,” he remarked.

From previous development projects Seibert began to understand the high demand for single-story residential units and lack of options in Mt. Airy. The 19 units at 7111 Germantown Avenue will range between 900 to 2,400 square feet. Most will be three bedrooms with a handful of one and two bedrooms options. The top level will have four penthouses. Ground level units will include outdoor space. The property will also have a dog run. New carports will feature green roofs. The entire perimeter of the building was excavated in order to waterproof it.

“The new addition coming out of the top of the building will be a nice counter punctuation to the heaviness of the facade’s Wissahickon Schist. The design the architects came up with almost looks like a lantern is going to be sitting on top of the front stair tower. We’ll also be doing green patina metal siding up there,” Seibert explained. 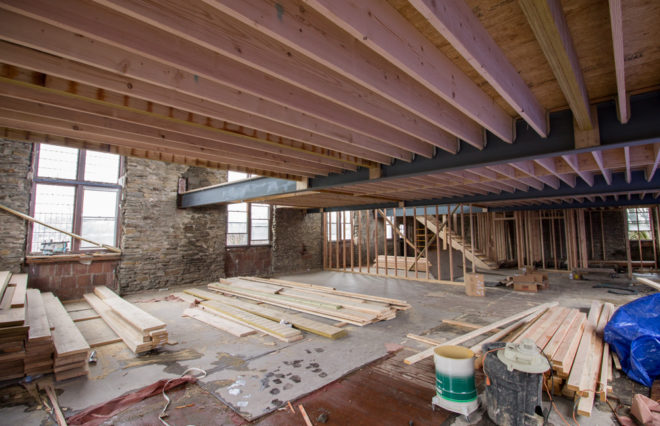 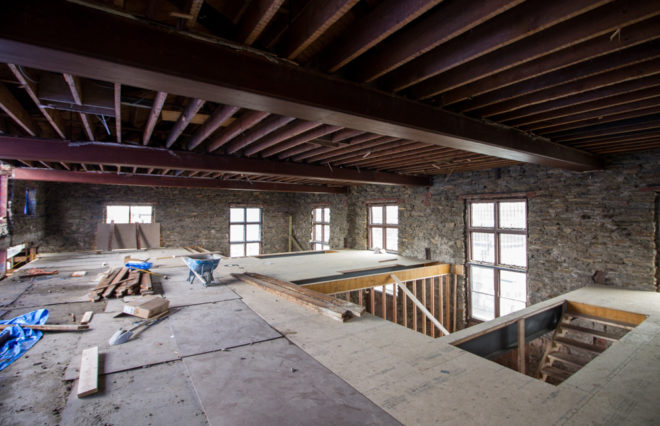 The church’s gymnasium is being separated into two floors to make the most of the space. | Photos: Michael Bixler

The main obstacle in finding an adaptive reuse with the project was accessibility. Normalizing the different elevations of a structure that was built in different phases can be a difficult issue to solve while meeting current building codes, Seibert noted. The spaces were large enough between the load-bearing walls, which helped limit major structural alterations, although there are still some interesting ones, like adding a new level within the footprint of the old gym.

“Not every building is easily able to be interchanged. It can be hard to add to an existing building and match what else is around, when you’re using very different materials,” said Seibert. “The reason there is so much stone in homes around Mt. Airy is, at the time they were built, it was cheap and abundant. Those little quarries don’t exist anymore.”

Keeping it close to home, Seibert tends to stay within Northwest Philadelphia when undertaking a project. He founded Bancroft Green when he lived in the Graduate Hospital area of South Philadelphia. At the time there were close to 400 vacant lots within the 19146 zipcode. Seibert’s firm purchased one side of a block on Bancroft Street and built 11 energy-efficient townhouses, thus spawned the name “Bancroft Green.” The first five homes were Energy Star rated. The final six homes achieved LEED Gold status. “They were the first homes in Center City that had geothermal wells. Each has a geothermal well underneath them that heats and cools the home,” Seibert said.

Seibert now lives in Mt. Airy with his wife, Jamie, and their two daughters. He often works on additional projects independently. When his children began attending the Waldorf School of Philadelphia, Seibert was asked to join the board and assist with finding a new campus to accommodate the ever-growing student body. His efforts led to the school moving in 2015 to its current location at 6000 Wayne Avenue in Germantown, formerly a large Episcopal church that had been vacant for 10 years. 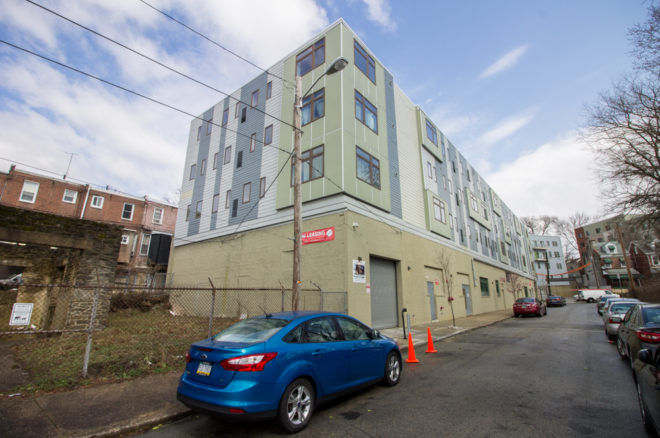 Along with architect Jim Cassidy, a fellow Waldorf School board member, Seibert purchased the property adjacent to the campus. The parcel included a mansion sitting on an acre of land with an old barn dating from the 1870s. Seibert and Cassidy focused on preserving the original 3,000 square foot barn and adapting it into additional space for the Waldorf School.

“We saved most of the barn’s stone walls and kept them exposed. Now, it’s the early childhood building for the school. It includes several classrooms and is where my wife now happens to teach,” Scott said. “It was a real labor of love and gives me great joy going to the campus and seeing my own children inside of it.”

Beyond their own projects, Bancroft Green occasionally builds for clients. In 2014, the firm was hired for a project at 525 E. Armstrong Avenue next to La Salle University. The firm first structurally modified a 10,000 square foot warehouse that had previously been a painting company to be able to handle three stories of new, modular construction. The look of the original warehouse was retained and a 30 unit apartment building was added to the top. The warehouse itself was converted into the parking garage. “From the front to the side everything still looks the same, as if it was still a warehouse. The three stories on top are very modern,” Seibert explained. 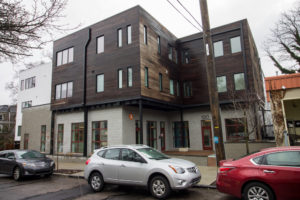 520 Carpenter Lane in Mt. Airy is largely occupied by empty nesters that wanted to age in place while avoiding the financial burden of keeping up with their old Mt. Airy homes. | Photo: Michael Bixler

Bancroft Green recently wrapped up a project at 520 Carpenter Lane in Mt. Airy. Seibert observed the lack of options for empty nesters to age in place and wanted to create an affordable option in the community. He found a 6,000 square foot warehouse on a block that is half commercial, half residential. The firm planned to retrofit the warehouse with one-story living options and an additional co-working space.

“I always look at land and buildings to see what can we do with the existing?,” said Seibert. “I try to approach development from a community standpoint. How is what we are going to do benefit the community at large?”

In the end, Bancroft Green demolished the old industrial space after determining that adapting the building was logistically impractical. While the new, 22-unit development was initially met with mixed reviews from locals, the building was named “Project of the Year” by Mt. Airy USA and units nearly sold out before it was completed.