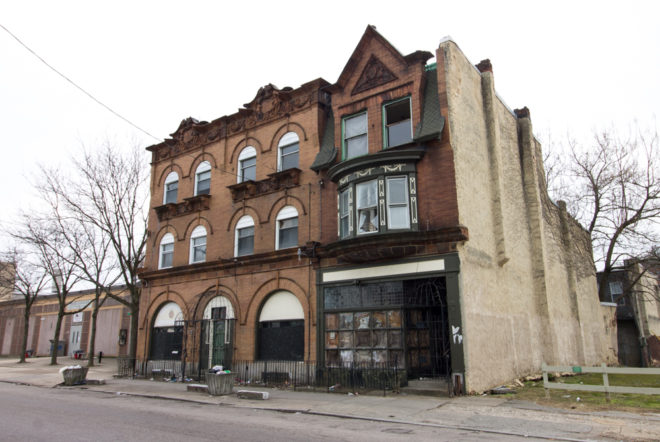 The former home and studio of Dox Thrash, pioneering printmaker and figure of the Philadelphia Black Renaissance, at 2340 Cecil B. Moore Avenue. | Photo: Michael Bixler

Dox Thrash, the African American artist that pioneered the carborundum mezzotint printmaking technique, was a major figure of the Philadelphia Black Renaissance during the early 20th century. His work is lush and raw and intimate, depicting Black factory workers, field hands, and jazz musicians in an age of institutional racism and segregation. Despite growing efforts to protect his former home and studio at 2340 Cecil B. Moore Avenue, the building’s fate still hangs in the balance of neglect and decay. The property has remained vacant and trapped in legal limbo since the 1990s. But the home was recently sold at a sheriff’s sale to an undisclosed buyer, which may be its final saving grace. Historic preservationists Dana Rice, Maya Thomas, and Chris Mulford, the trio behind the advocacy group, Dox Thrash House, have led the charge to save the local landmark and preserve the artist’s legacy in North Philadelphia. On Saturday, February 23 the group will lead a free tour of rapidly redeveloping Sharswood to raise awareness of current efforts behind saving the historic home and to highlight the importance of preserving the neighborhood’s African-American history.

“We’re stepping up our engagement activities around the house and neighborhood’s history because of a recent change in ownership,” said Maya Thomas, one of the three preservationist involved in saving the Dox Thrash House. “Awareness around these issues is key for reaching solutions. We’re starting with a tour and we plan more engaged events throughout the year.”

Interest in saving the Dox Thrash House began as an architecture assignment for Rice, Thomas, and Mulford while attending graduate school at the University of Pennsylvania. The group soon took up the cause as they learned more about the life and work of the artist and the rich, Black history of the surrounding neighborhood. “Our vision is to put forth a model that can be replicated. Linking to the past to benefit the present and develop the future,” said Dox Thrash House advocate Dana Rice, an architectural designer and Hidden City Daily contributor.

The tour will touch on legendary Black landmarks like the Pearl Theater, the Pyramid Club, and the Dox Thrash House, which was purchased in the 1950s by the late Muhammad Ali Hasanan. Since there was no clear successor in his will, many of Hasanan’s properties have sat in limbo for decades. Multiple claims of ownership of the Dox Thrash House between his children have legally left the building without a caretaker and in a state of continued deterioration. “Luckily for us, the ownership has been cleared up after the recent sheriff’s sale. Before it was tangled and hard to discern and now there is a clearer path to dialogue around saving this important historic resource,” said Thomas. “Due to the current condition of the house, realistically the facade is what we can focus on. However, because of the rich history of both Dox Thrash and his art, as well as Muhammad Ali Hasanan’s legacy of civil rights activism, there is a lot more aspects of preservation we can can engage in other than just the materiality.”

The organizers aim to spotlight the neighborhood, both its past and its present, to show how the existing community can contribute to the area’s growth and future direction. “We are launching a series of the event to explore these routes by engaging with the community on how design can bring that vision to life.” said Thomas. The tour is free, open to the public, and will conclude at 3:30PM with lunch at local Sharswood eatery Bella’s Restaurant and Grill.