Searching For Frankford Creek Along A Winding Trail

Frankford Creek meanders from its origins in the Tookany Creek until it empties into the Delaware River. Unlike many creeks in Philadelphia, it did not become a covered sewer, but it may as well have. Hidden and heavily polluted, the creek was once called “The lost child on the chart of the Delaware River” by a local congressman in 1938. It is now more of a barrier than a sylvan passage. The creek’s path has been altered over the years, its bends and curves tweaked and straightened to control flooding and waste.

I went in search of Frankford Creek recently and figured that I would start with the Frankford Creek Greenway, imagining that I would find a bike path and pedestrian trail flanking the waterway. As it turns out, the name “Frankford Creek Greenway” is a bit of a misnomer. I didn’t see anything that looked like a greenway or a creek-bound trail. At one end, the 1.2 mile stretch starts at the intersection of Aramingo Avenue and Wheatsheaf Lane and heads east towards the Delaware River. The intersection of Aramingo and Wheatsheaf is lined with a Wawa, a liquor store, and a strip mall. 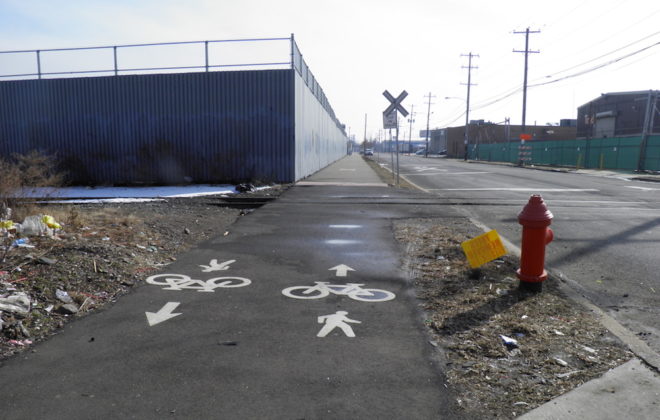 The path to the beginning of the Frankford Creek Greenway on Wheatsheaf Lane near the corner of Aramingo Avenue. | Photo: Sharon Barr

Ignoring the trail map, I walked along Aramingo Avenue to find the Frankford Creek. Here it flows under the pilings of I-95. There was a dirt path on the north side of the creek, so I followed that for a bit. Bags of trash sat idle in the water and loose garbage littered the banks. After a short walk, I hit an impassable highway and realized that this could not be the Frankford Creek Greenway, so back I went to the corner of Aramingo and Wheatsheaf. There I realized that the north side of Wheatsheaf had a wide, paved walkway with the symbol of a bicycle painted on it. Aha! The Frankford Creek Greenway at last!

I set off toward the river, past the Port Richmond Self Storage nestled in spiraling razor wire, a Parking Authority impoundment lot, and a homeless encampment with a hand-lettered sign that read, “U.S. Marine. In need of help. I am only days away from renting a room.” At Richmond Street I saw the first sign for the Frankford Greenway. I was facing the gates of the Northeast Water Pollution Control Plant. Built in 1926, the plant was then the largest of its kind in the city, taking in sewage that had been dumped into the then-unburied Wingohocking Creek. In 1926, the Inquirer published an article reporting that the new sewage treatment plant would “rid the Delaware River of much of the pollution that contaminates the city water supply.” Despite this historical connection to water, Frankford Creek was nowhere in sight. 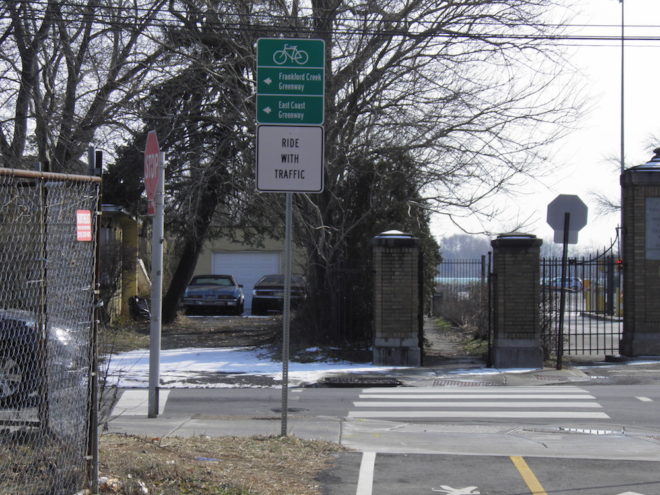 Sign for the official head of the Frankford Greenway trail at the corner of Wheatsheaf and Richmond Streets facing the Northeast Water Pollution Control Plant. | Photo: Sharon Barr

I turned up Richmond Avenue, with weary row houses on one side and one-story stucco homes on the other that look like remnants of a military installation. From Richmond Street, I took a right on Lewis Street. Here, the Frankford Creek Greenway parallels the high bank of the railroad tracks. A stairway up to the tracks is barricaded. An old, tufted chair dumped by the side of the path is slowly decomposing.

Lewis Street dead ends at Delaware Avenue, as does the Frankford Creek Greenway. Looming over the landscape is Philadelphia Electric Company’s Richmond Generating Station in all its abandoned Beaux-Arts glory. When the station was built in 1924 the Inquirer reported that it would “represent an investment far in excess of any one present building in Philadelphia.” In the article, William Eglin, the vice president of PECO, said he could not reveal the cost, but if he did, “It would be regarded as staggering.” In 1927, company promotional materials for the new plant stated that in the early days of electricity, a power-generating station was a “monument to progress,” and so Richmond Generating Station was “dressed in outward garments of refinement symbolic of its strength and power—creating the impression of beauty and dependability and strength.” Today, the brass chandeliers that once adorned the grand interior are long gone. The building is surrounded by an electric substation, guarded by security, and walled off. I walked up to the locked gate and peered across the Delaware River toward the oil tanks in Pennsauken.

In University of Pennsylvania professor Aaron Wunsch’s book, Palazzos of Power: Central Stations of the Philadelphia Electric Company, 1900-1930, published in 2016 by Princeton Architectural Press with photographs by Joseph E.B. Elliot, Wunsch writes of this industrial ruin and its sister, the Delaware Generating Station: “If the Delaware and Richmond Stations had been built downtown, they would have been demolished or reused by now. As it is, they sit quiet and empty. Local newspapers run occasional stories on them. Historians of technology arrange tours. Richmond Station is even featured, obliquely and unrecognizably, in the set for the movie Twelve Monkeys. But the public remains puzzled or indifferent. The spotlights are off, passing trains come less often, and the ‘Workshop of the World’ lies in Asia.”

The City and other stakeholders have ambitious goals to connect the Frankford Creek Greenway to a regional network of trails. A new park has been proposed for nearby Bridesburg. This is a neighborhood that could use some uplifting public space. On the exterior of a house across from Richmond Station is a large banner mourning the loss of a young man to drug abuse. 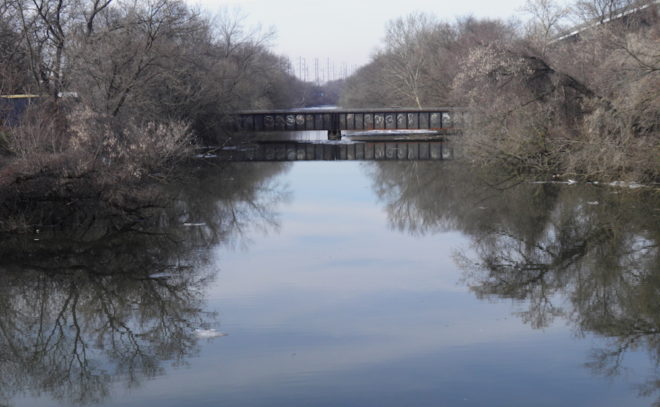 Looking west at the Frankford Creek just before it empties into the Delaware River. This is the first view of the creek along the Frankford Greenway. | Photo: Michael Bixler

Only a few people were using the Frankford Creek Greenway on this chilly Sunday. A burly, bearded man driving a PPA tow truck noticed me with my camera and slowed down to ask me if I was looking for birds. “No,” I said, “just looking for the Frankford Creek. Can I get down to it from here?” He half-smiled at me and moved his hand in that up-and-down tilt that means “Maybe yes, maybe no.” He then pointed over toward a rusty, little bridge. “It’s down there,” he said. Here the Frankford Creek finally empties into the Delaware River. You can’t get down to it, but you can stand on the small bridge and watch the creek’s slow moving approach from the west.

I thought back to the laudable goals of the Tookany/Tacony-Frankford Watership Partnership with the Frankford Creek Greenway. “A celebration of the water environment, a realization of economic opportunities, and an affirmation of community culture and history,” so its website reads. The water environment (aka creek) may be difficult to see, but the possibilities of affirming our industrial heritage and social history stood conspicuously before me. In a walk of just over a mile are stark reminders of when Philadelphia was an international manufacturing powerhouse, the venerable “Workshop of the World.” May the elusive Frankford Creek Greenway eventually find a means to realize its full potential and interpret the area’s industrial heritage for future generations to come. 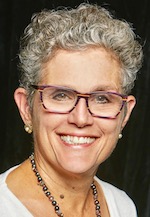