Editor’s Note: The 2019 Municipal Primary Election is three months away and the race to replace politics as usual with fresh ideas is heating up. Justin DiBerardinis is running for City Council At-Large and has announced a strong, pro-preservation platform. The 37-year-old is appealing to voters disillusioned by Mayor Kenney’s lack of historic preservation leadership, the 10-year tax abatement, inequitable real estate development, and the record-breaking rate of neighborhood demolition. Earlier this month DiBerardinis earned the first endorsement by RePoint Philadelphia, a new political action committee that supports candidates dedicated to preserving the city’s built environment.

DiBerardinis was born and raised in Philadelphia. He began his career as an organizer in Kensington with the Eastern Philadelphia Organizing Project and Good Schools Pennsylvania. He worked as the legislative director for Councilwoman Maria Quiñones-Sánchez and, most recently, as program director of historic Bartram’s Garden. DiBerardinis draws from his range of experience in public service and community engagement. He has a progressive take on what preservation in Philadelphia could look like and how it might play a role in supporting pressing issues like social equity and sustainability.

Hidden City Daily staff writer Starr Herr-Cardillo caught up with DiBerardinis to discuss expanding  historic preservation policies in Philadelphia, who they should serve, and how he envisions putting it all to good use. 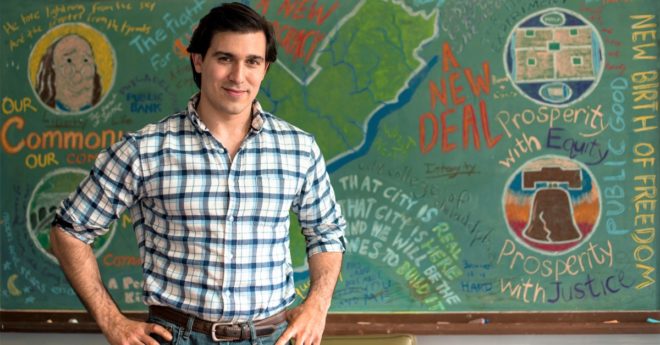 Starr Herr-Cardillo: If you are elected to City Council what are you going to do for historic preservation in Philadelphia? What are a few actionable items you’d like to implement?

Justin DiBerardinis: First of all, I think it’s important to have people in City Hall who care about this issue. People who think it’s important for the future of the city. Without that, we’ll never have the political will necessary to make meaningful change. It’s not just about electing a champion. We’ll need many champions and that will come from consistent work to build a broader and more diverse constituency for this issue. Philadelphians of all walks of life love their neighborhoods. The layering of history, the unique architecture, material culture, the incredible diversity of housing stock, but all of this still bound together by the rhythm of the row home and the twin.

The fundamentals are all here for a powerful movement in preservation. I believe that its realization is all but a precondition for anything truly transformational to happen. Perspectives will need to shift. We will have to realize that preservation is not merely a conversation about architectural pedigree, history book significance, or rigid historic districts that regulate shutter width and color palette. It is about the complexities, layers, and approach to preservation that is diffuse, adaptable, but still powerful. I think the outcomes of this would be incentives and policies that favor preservation, that tilt a developer or a homeowner to preserve rather than to demolish. Expedited permits for preservation, waived permit fees for preservation projects. Tax abatements that give the strongest incentives to preservation, neighborhood “heritage districts” that are flexible and can preserve character without freezing people’s homes in time.

SHC: Historic preservation, in the traditional sense, often gets characterized as elitist or superficial, but many progressive cities are proving that it can play an important role in city planning, particularly when it comes to sustainability goals. There is a saying that the greenest building is the one that is already built. Portland has a deconstruction mandate which requires the salvage and reuse of historic building materials. A number of cities incentivize adaptive reuse. Do you feel like historic preservation, as a tool for sustainability, is being adequately used in Philadelphia?

JD: Yes! The greenest building is the one we’ve already built. However, I live in an old Germantown home. I can tell you from personal experience that they aren’t necessarily the most energy efficient in their operation. That is why I believe the pairing of preservation and sustainability is so important. I think our incentive structures should be putting a premium on both sustainability and preservation. Could we incentivize or abate homeowners to weatherize and reduce the carbon foot print of their homes? Absolutely. Could we allow low and moderate income homeowners to borrow against sustainability abatements to afford improvements? I believe we can. The result of these policies would advance not just preservation, but also economic equity and sustainability in Philadelphia. I believe those are the most pressing issues that we need to confront over the next generation.

SHC: Despite our dubious designation as a “World Heritage City,” Philadelphia’s historic building stock is vastly under-protected compared to peer cities. Over the past year we have seen demolition hit a record high. The situation has been playing out on Jewelers Row over the past two years and seems to get at the heart of the issue: at-risk historic building stock, indiscriminate zoning, often for higher density than what currently exists, and a 10-year tax abatement that incentivizes new construction. With those specific issues in mind, are there any recommendations that came out of Mayor Kenney’s Historic Preservation Task Force that you’d like to see implemented in the future? What should the City act on right now?

JD: I grew up in the 1980s and 1990s in Philadelphia. The main threat to preservation and the city’s historic character was population loss, economic decline, and the subsequent abandonment and blight. That is still a problem here. It’s no longer happening in my old neighborhoods haunts like Fishtown, Northern Liberties, Francisville, and South Kensington, but it is now playing out in communities like Frankford, Feltonville, Logan, and East Germantown. We’ve now added to that challenge the pressures of redevelopment in the urban core and can see the dual threat that our historic fabric is facing. It’s not surprising that we are reaching record highs in demolition. I think the Task Force report is pointing in the right direction. We need a proper inventory and zoning designations that are sensitive to historic structures.

I believe the challenges create by blight can only be addressed by interventions focused on poverty, equity, and ownership. The preservation policies we’re discussing here can be a part of that, but will be most effective if paired with a generational investment in economic equity. My “New Deal For Philadelphia” platform is rooted in a belief that we need massive economic relief in our distressed neighborhoods. We need policies that favor and support local business growth and the creation of an Works Progress Administration-style investment in living wage employment and serving the public good in these communities.

The threat of redevelopment will be hard to counter without incentive policies that allow preservation to compete economically with new construction. Whether by blight or redevelopment, these demolitions are being driven my economic realities. I believe that our solutions must be economic as well.

SHC: You’ve publicly expressed criticism of the 10-year tax abatement. In a recent interview with PlanPhilly you mentioned that you would like to see it modified to incentivize home repair in row house communities as a means for better neighborhood preservation. What should those adjustments look like?

JD: I think the tax abatement was a defensible public policy in the Philadelphia of the 1990s. The city has changed so much in the 20 years since then. I think it’s time for a conversation about what an abatement for the next 20 years should look like. I think economic equity and sustainabilty have to be front and center in that conversation.

SHC: One of my favorite preservation-related initiatives is the Healthy Rowhouse Project, which makes the connection between housing affordability, maintenance, and public health. The premise is based on the fact that Philly has a remarkably high percentage of lower-income homeowners who reside in older row houses, but that deferred maintenance, due to lack of access to loans or capital, often leads to health issues for residents. How do you think the City could play a role in expanding the notion of what constitutes preservation while tying it in to some of the more pressing social issues that people in Philadelphia are facing?

JD: I’m a big believer in this project. The breadth of ownership in this city is rare and special. It’s a characteristic of a historically blue collar city that has historically been more affordable than many other American cities of its size and density. Sadly, it’s a part of our identity that is also under threat and eroding as inequity and property values grow. How do we maintain this in a time of headwinds?  By the merging of the arguments for preservation and equity. Low and moderate income home ownership is perhaps our most powerful tool to ensure that a wide range of Philadelphians benefit from a new era of economic growth. But to that we have to keep them in homeowership!

I believe that abating preservation of our housing stock and allowing low and moderate income Philadelphians to borrow against those abatements, perhaps through the creation of a “Philadelphia Public Bank,” would provide both the incentives and capital needed to create transformational investments in equity and preservation simultaneously.

SHC: Are there any cities or initiatives that you’ve come across that have fused equity and preservation in ways that feel inspiring or like they could work here?

JD: I think New Orleans is a city that Philadelphia should look to. Similarly historic, with a legacy of diversity and working class neighborhoods, and both deal with contemporary struggles of poverty. I have been really intrigued by Operation Comeback, a project of the Preservation Resource Center of New Orleans. This project works to acquire titles to vacant homes falling into disrepair in the city’s historic, but economically struggling neighborhoods. The homes are repaired and sold. It doesn’t sound likes the program has been perfect, but I think an idea like this, paired with programs for low and moderate income homeownership, have great potential to stabilize Philadelphia neighborhoods still dealing with decline and blight. A program like this can simultaneous sow the seeds of equity, ownership, and preservation that will make our neighborhoods more resistant to rapid gentrification.

SHC: What is your favorite historic spot in Philly and why?

JD: For the last six years I’ve led the program at Bartram’s Garden in Southwest Philadelphia. It has captured my heart and I don’t think it will ever let go. I believe Bartram’s is one of Philadelphia’s most improbable and rare preservation stories. To stand in that space is to stand in witness to the layers and tensions of an evolving cities. It’s a rare looking glass to the birth of Philadelphia, the centuries before, the industrial age thereafter, the age of skyscrapers, and the work of rivers. It’s all right there. I believe the work of Bartram’s as an organization has been to steward that remarkable layering, to hold the frictions of evolution and integration, to add more. It has been an absolute privilege to be a part of it.