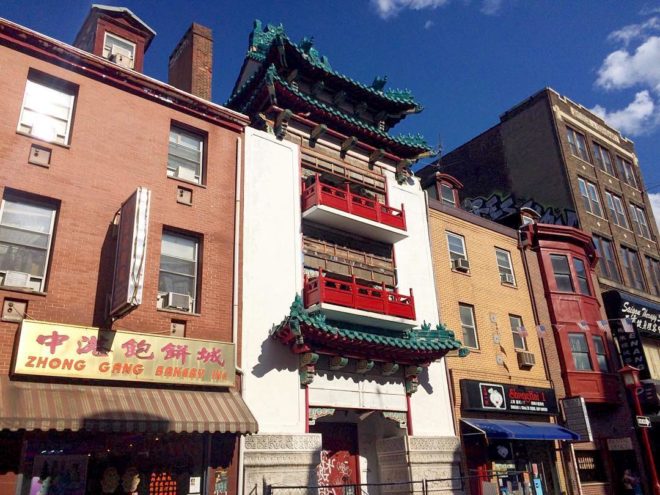 Demolition alarms were sounded this week when a petition began circulating online calling on the City to reject a demolition permit application for the former Chinese Cultural and Community Center at 125 N. 10th Street. Philadelphia Chinatown Development Corporation (PCDC) created the petition after discovering an application notice on the building on February 14. The ornate, Chinatown landmark was added to the Philadelphia Register of Historic Places in 2013 with a nomination submitted by the Preservation Alliance for Greater Philadelphia. The historic designation legally protects the building from unauthorized alterations, additions, and demolition. The property’s owners, PZ Zhangs Associate LLC, recently submitted a proposal for approval to the Historical Commission seeking permission to demolish the majority of the building, including the structure’s rear main block, with plans to construct a large addition over the remaining portion of the property. The plan, essentially a free-standing facadectomy, retains only the Mandarin Palace-style exterior, gabled, tile roof, and 14 feet of the front’s main block. The owners’ proposal, which was granted a continuance yesterday at the Historical Commission’s monthly Architectural Committee meeting, will now be reviewed on March 26.

Yue Wu, Community Planner & NAC Coordinator of the PCDC, said that the organization created the petition to raise public awareness and gather support for ensuring the protection and preservation of the Chinese Cultural Center. So far the petition has gained over 3,000 signatures in four days.

“PCDC will go to the hearing and make our concerns be heard. Now that the property is in the hands of a private entity, we can only expect that the historic character of the building being preserved,” said Wu. “In a period of growth for Philadelphia, we as citizens must advocate for the preservation of these historic treasures.”

The PCDC attempted to acquire the building a few years ago with plans to convert the former cultural center into a museum dedicated to the history of Chinatown, yet the plans fell through. In 2016, Scioli Turco, Inc., a conservation nonprofit that rehabilitates blighted properties, was appointed trustee of the building by the Court of Common Pleas under The Abandoned and Blighted Property Conservatorship Act, or Act 135. Repairs were made to the roof, new joists were installed, the facade was restored and repainted, and new windows were installed. The property was then put on the market in 2017. The current owners, PZ Zhangs Associate LLC, purchased the building in May 2018 for $1.8M. 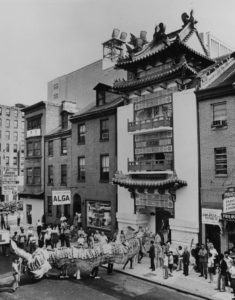 PCDC staff met with the owners of the building on February 18 where drawings of the plan submitted to the city were presented. PZ Zhangs Associate LLC also presented a restaurant concept for the ground floor. The owners told the PCDC that they did not know about the demolition permit application, and, thus, did not inform the organization or the Chinatown community before submitting. Wu said the owners claimed the omission was a miscommunication with the proposal’s architect. “The current owners expressed a desire to retain the right talent to preserve and protect the building in their process to put the building back into productive use,” said Wu.

The Historical Commission staff recommended that its Architectural Committee deny the plan in a pre-meeting review of the proposal. The Committee convenes monthly and makes recommendations for approval or rejects proposals for additions and alterations to historic properties prior to full Historical Commission hearings. Commission staff based their assessment on 125 N. 10th Street’s historical character, significance, and architectural features–all points that led the Commission to vote in favor of designating 125 N. 10th Street to the local register in 2013. Staff also cited Section 14-1005(6)(d) of the City’s Preservation Ordinance, which prohibits demolition of designated buildings unless a claim of financial hardship can be proved. The owners were granted a one-month continuance at the Commission’s Architectural Committee meeting on February 19, and the case was not discussed. The proposal will be addressed at the next meeting in March.

“The recommendation of PHC staff is “denial,” and we support that position,” said Paul Steinke, executive director of the Preservation Alliance for Greater Philadelphia. “There is no reason that we know of that the existing structure could not be feasibly redeveloped for a new use.”

125 N. 10th Street was built in 1831 and was originally a Federal-style row house. The building received multiple additions in the early 2oth century. In 1955, the late T.T. Chang, regarded as the unofficial mayor of Chinatown, established the Chinatown YMCA and moved the organization into the building’s second floor. The property held multiple tenants at the time including the Adelphia Electric Company. Chang, a celebrated leader in promoting Chinese culture in Philadelphia, purchased the building in 1966 and renamed it Chinese Cultural and Community Center. The building’s facade, designed by Taiwanese architecture firm C.C. Yang, was assembled from pre-fabricated pieces made in Taiwan and added to 10th Street over the course of two years. The new exterior, which resembles a Chinese palace, was finished in 1971, over a decade before the Friendship Gate (also designed by C.C. Yang) was completed in 1984. The center became a hub of cultural and educational activity for Chinatown residents, including courses in English language, cooking, and the arts. It hosted epic, traditional banquets during the Chinese New Year. The center was also a repository and showplace of a collection of Chinese artifacts. After Chang’s death in 1996, programming at the center began to decline until it closed for good in 2007. The Chinatown landmark has now been vacant for 12 years.