The Philadelphia Historical Commission’s Committee on Historic Designation will convene on Wednesday February 13 to recommend nominations for designation to the local historic register. Nine nominations are on the docket, including the Jewelers Row Historic District that was first submitted by the Preservation Alliance for Greater Philadelphia in March 2017. The proposed district, which includes five properties currently under threat of demolition, would protect an additional 44 contributing commercial buildings along Sansom and 8th Streets at the heart of the more than 100-year-old trade district. The nomination is recommended by the PHC staff provided a few minor changes are made. A number of property owners within the proposed boundary have retained legal counsel and are seeking a continuance on its consideration.

The Keeping Society of Philadelphia, an all-volunteer non-profit whose mission is to nominate buildings for legal protection on the local register, is responsible for five of the nine nominations submitted, including the ornate Conkling-Armstrong House at 2224-26 West Tioga Street in North Philadelphia. 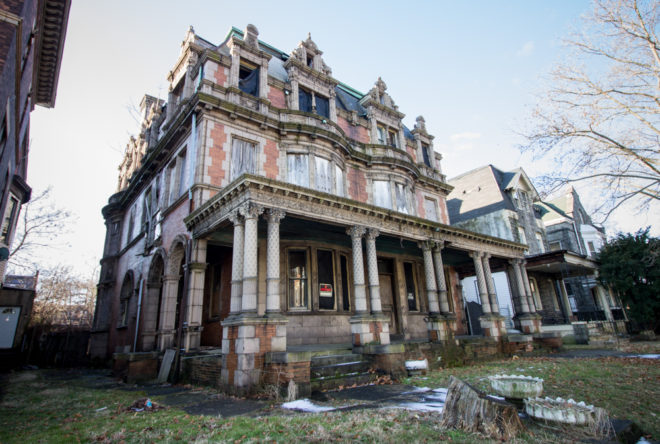 Efforts to protect the Conkling-Armstrong House at 2224-26 West Tioga Street from future demolition are finally underway. The Keeping Society Philadelphia has filed a nomination for placement on the Philadelphia Register of Historic Places. | Photo: Michael Bixler

The exuberant “Chateauesque” style twin, located in Nicetown-Tioga, served as a real-life catalogue of the Conkling Armstrong Terra Cotta Company, a local manufacturer that specialized in architectural terra cotta ornamentation at the end of the 19th century. The massive twin was designed in 1898 by architect Edward V. Seelers. According to the nomination, Stephens, Armstrong & Conkling was the first company in Philadelphia to produce terra cotta solely for architectural applications, supplying terra cotta ornament and tile for high-profile landmarks like the Witherspoon Building, the Curtis Publishing House, and the West Philadelphia Title and Trust Building.

Efforts to preserve and recognize the house, which is currently unoccupied, have been in the works for years. In September 2017 it was the subject of Inquirer architecture critic Inga Saffron’s column and was identified as a resource to protect in the Tioga Goals and Strategies Report prepared by the Philadelphia City Planning Commission in 2016. The PHC staff recommends the nomination for designation.

The Keeping Society nominated the set of three contiguous buildings spanning 200-204 S. 12th Street. Comments made by PHC staff on two of those buildings, Camac Baths and the Minton Residence, take issue with the properties’ lack of “integrity.” In historic preservation terms, integrity refers to a property’s ability to convey its significance and is a common criterion in national and local legislation. However, Philadelphia’s ordinance has no explicit integrity requirement.

Camac Baths at 204 S. 12th Street first served as a Jewish shvitz. It later became an underground meeting place for open and closeted white gay and bisexual men beginning in the 1930s. 12th Street Gym took over the old bathhouse in the mid-1980s. The nomination contends that the building is significant for its connection to the cultural and social life of Philadelphia’s Jewish immigrant population as well as for its association with LGBTQ subculture.

The five-story brick building was not a purpose-built bathhouse and has been subsequently modified. However, it does retain interior detailing from its time as a bathhouse. 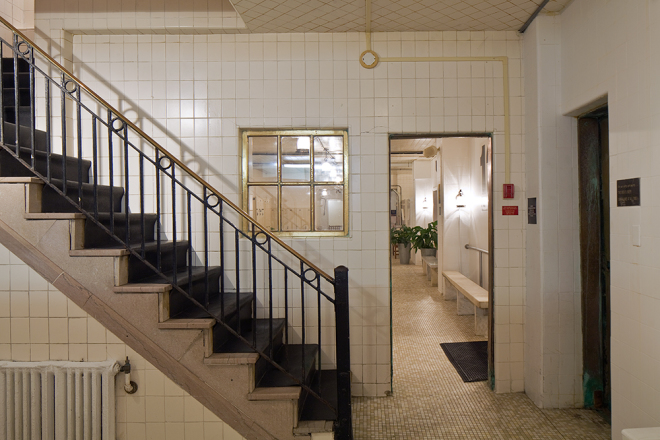 The lower level of the 12th Street gym retains a good bit of detailing from its days as Camac Baths. | Photo: Peter Woodall

The Minton Residence, at 204 S. 12th Street, is a three-and-a-half story townhouse that was the home and business of Henry Minton, an African American caterer and restaurateur in the late 19th century. Like Camac Baths, the building has undergone a number of alterations over the years, although it does retain its basic form.

In the statement of significance, the nomination connects Minton’s business to the larger phenomenon of Black caterers and Black-owned restaurants that emerged in the antebellum period, as it was one of the limited industries open to African Americans at the time. The restaurant also served as a meeting place for leaders in the African American community.

PHC staff states in their comment that, “Henry Minton is an important figure in Philadelphia’s history and certain worthy of commemoration,” but that the building does not satisfy the criteria “owing to the altered state of the building.”

Although demonstrating integrity is not a requirement of Philadelphia historic preservation law, Jonathan Farnham, executive director of the Philadelphia Historical Commission, stated it informs his agency’s approach to nominations. “The Historical Commission should find that a building retains sufficient integrity to represent its historical significance before designating it,” Farnham said. As a result, the PHC staff recommends that neither the Camac Baths nor the Minton House satisfy the criteria for inclusion on the register.

The third building in the set is the Jacob Myers & Sons building at 200 S. 12th Street, directly adjacent to Camac Baths, nominated by The Keeping Society due to its unique blend of architectural styles. The building was last occupied by Tabu night club. The PHC staff recommendation finds that the nomination does not demonstrate the stated criteria. 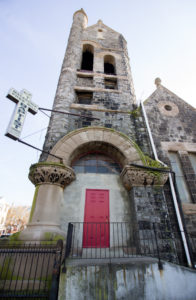 McDowell Memorial Presbyterian, now occupied by Macedonia Free Will Baptist Church, at 2036-40 Cecil B. Moore Avenue. The church was built in 1870 and designed in the Richardsonian Romanesque Revival style. | Photo: Michael Bixler

Two 19th century churches are up for designation recommendation: the McDowell Memorial Presbyterian Church at 2036-40 Cecil B Moore Avenue and St. David’s Protestant Episcopal Church of Manayunk at 150 Dupont Street.

McDowell Memorial Presbyterian, built in 1870, is a sturdy stone church occupying the corner of Cecil B. Moore and 21th Street. Plentiful arches with hefty contrasting voussoirs of light sandstone nod to its Richardsonian Romanesque Revival style. A 1893 auditorium addition was designed by local architect Henry Augustus Sims. It features stained glass windows by Tiffany Studios, which contributes to its overall significance of the building as “representative of the national trend towards theatrical, auditorium-plan churches in the late 19th century,” so states the nomination submitted by architectural historian Amy Lambert. The building is currently being used by the congregation of Macedonia Free Will Baptist Church.

St. David’s Protestant Episcopal church as well as its Parish and Sunday School in Manayunk exemplify High Victorian Gothic and Gothic Ecclesiastical Revival styles. The church, nominated by historic preservationist Joe Menkevich, played a role in the early history of mill workers and Irish immigrants in the area. The parcel also contains an historic burial yard.

Also on the agenda are a stone commercial building at 6626 Germantown Ave that was built in 1904-05 for druggist Dr. Clement B. Low and a proposed amendment to Society Hill District submitted by staff of the PHC to reclassify 28 properties in the district, which was designated in 1999.