Editor’s Note: A version of this story was published in the Winter 2019 issue of Extant, a publication of the Preservation Alliance for Greater Philadelphia. 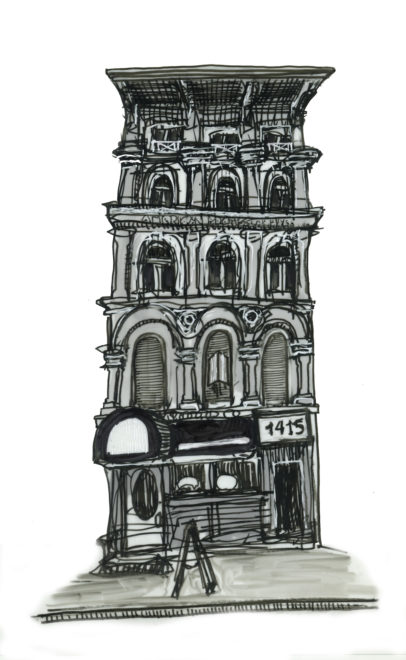 The popular Locust Rendezvous may draw watering-hole aficionados to the building’s ground floor, but the long-vacant upper stories of this stone-faced edifice hover like a ghost over Locust Street. Few realize that this once-imposing, now-obscure relic is one of the oldest commercial buildings west of Broad Street. The neighboring Academy of Music, whose grand arched windows are subtly echoed in its sinewy stonework, is only one year older.

The building was the product of turbulent times. Constructed as a meeting hall, library, and social club for the American Protestant Association, a secretive anti-Catholic alliance of Protestant Irish immigrants and nativist sympathizers, the building outgrew its bigoted roots to become, a generation later, the headquarters of the American Ethical Union (and also, in a karmic twist, a Catholic military academy). In 1905, it narrowly averted becoming one of the first buildings in Philadelphia to be demolished for a parking garage after the Bellevue Hotel redesigned a planned automobile annex.

It is unclear whether our current generation will be as forgiving. Despite its age and stature, the building is not listed on the Philadelphia Register of Historic Places, leaving it vulnerable to demolition. With a growing list of code violations and protective netting now shrouding its facade, immediate intervention might be necessary to avoid a rendezvous with the wrecking ball.