New Museum In The Works For America’s First Male Saint 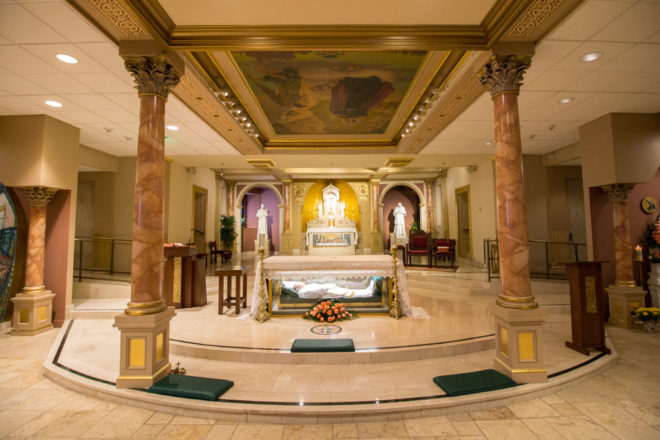 John Neumann was the first Catholic bishop to be canonized in the United States. His body, preserved inside a glass casket, is the centerpiece of a shrine dedicated to the priest within the lower sanctuary of St. Peter the Apostle Church in Northern Liberties. | Photo: Michael Bixler

At the intersection of 5th and Girard, two heavily-trafficked, arterial roads meet, making it the kind of place you pass by on your way to somewhere else. But what you may not know is that each time you pass by the large, granite church towering over the southeast corner, you’re passing by the 160-year old body of the first American bishop to achieve sainthood.

The Shrine of St. John Neumann is located in the lower church of St. Peter the Apostle. Neumann, born in 1811, was a Redemptorist priest who served as the fourth Bishop of Philadelphia and was later canonized by Pope Paul VI. Neumann collapsed on Vine Street from a heart attack and died on a granite stoop in 1860. For more than a century people have come from all over the country to visit the saint, pray to him, and pay their respects.

“You don’t know who’s going to come by on any given day,” said Father Raymond Collins, director of the Shrine. “One of the more extraordinary stories involved a young man who was ill, who flew with his whole family overnight from California, attended two or three masses on Sunday morning, and flew back that night.”

Neumann’s body is on display in a glass casket where it may be observed by those who visit the shrine. He is dressed in traditional 19th century vestments. Covering his face is a life-like mask designed by a forensic scientist and a funeral director.

Inside the main sanctuary of St. Peter the Apostle. The church’s organ was once the largest functioning organ in the city until John Wanamaker purchased and installed his Grand Court organ in 1909 in his new department store. | Photos: Michael Bixler

The shrine is part of a campus that includes the church, St. Peter the Apostle School, a pre-kindergarten through 8th grade Catholic school, and the St. John Neumann Center, an auxiliary building which hosts a banquet hall as well as the Redemptorist Archive which serves to document the history of the Catholic congregation in the United States since 1832.

This campus will be getting a new addition early next year. The first floor of the school is being converted to host a Shrine Museum, which will document the life of Neumann as well as the history of Catholicism in the United States. The tentative, soft opening date for the museum is March 28, which is Neumann’s birthday. A new gift shop and canteen just opened on January 5 coinciding with the saint’s feast day.

The Shrine Museum will feature the permanent display of hundreds of historical objects relevant to the life of Neumann and United States Catholic history. There will also be rotating exhibits made possible by collaborations with the Archdiocese of Philadelphia and religious communities throughout the country with whom Neumann had a relationship.

“There are no other museums of this type in the city,” said Dr. Patrick Hayes, lead archivist for the Redemptorists. “We’re going to put out things that no one has ever seen.” 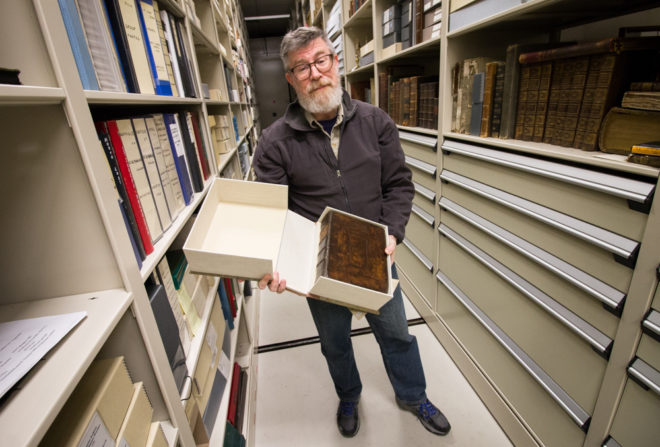 Dr. Patrick Hayes, lead archivist of the Redemptorists, displays a rare Carey Bible, one of 500 of the first Catholic Bibles printed in the United States by an Irish-born publisher in Philadelphia. | Photo: Michael Bixler

One of Hayes’ favorite objects in the museum is a Carey Bible. The edition was published in Philadelphia at the end of the 18th century by Mathew Carey, an Irish-born publisher and economist. It is among the first Roman Catholic bibles to be printed in the United States. According to Hayes, there were only 500 copies of the Carey Bible printed and only 42 of those remain in existence today. Beyond the rarity of the book, Hayes is enthusiastic because the museum’s copy is exceptionally well-maintained. “I’ve seen 10 or 11 of these,” he said. “Ours is superior in every respect.”

Hayes cannot confirm this, but he has reason to believe this particular copy of the Carey Bible belonged to Charles Carroll, the only Catholic signer of the Declaration of Independence. Pages of the Bible will be scanned and displayed on a tablet computer so visitors can flip through without the risk of damaging the original volume.

The floor plan of the museum is laid out so that as visitors walk through the exhibits they progress chronologically through the life of the saint–from his beginnings in the Czech Republic (known then as Bohemia), to his immigration to the United States and the early years of his priesthood in Buffalo, New York, to his joining of the Redemptorists, to his appointment as Bishop of Philadelphia, and finally, after his death, the process of his canonization.

Some of the objects from Neumann’s life on display will include school records (in which he earned praise such as “eminent in progress and diligence” and “first in dogma and morals”), a letter home from his seminary in Prague to Prachatice where his family lived, a map of the United States drawn by Neumann to familiarize himself with the country he was traveling to, some books (he had an interest in botany), a well-used pocket Bible (printed in Greek), and a translation of the Lord’s Prayer into Arabic, done by Neumann for fun as a young boy. 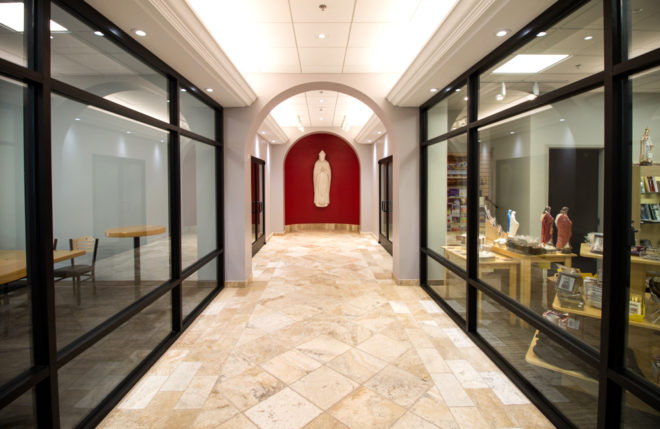 The Shrine Museum’s gift shop and canteen opened earlier this month on first floor of the church’s school. The museum itself will hold a soft opening on March 28. A marble monument that once laid atop the tomb of St. John Neumann leads visitors down the hallway towards the gallery space. | Photo: Michael Bixler

The Arabic translation is especially significant because it outlines a key detail about Neumann. He was a polyglot with an extraordinary aptitude for learning different languages. According to Hayes, at the time of his death Neumann spoke 11 languages including Gaelic. This ability to quickly pick up languages informed Neumann’s entire career as a priest. He came to America because he wanted to minister to the recent influx of German immigrants. His command of different languages allowed him to function as an important bridge between these immigrants and much-needed social services.

Neumann’s focus remained on helping recent immigrants for the duration of his career. After he came to the United States the Germans he ministered to were quickly joined by Irish immigrants fleeing the Great Famine. He is remembered today as a patron saint of immigrants. This patronage continues to be represented in the services at St. Peter the Apostle.

“Pilgrims come [to the shrine] from all over the place,” said Hayes. “This has impressed me since I’ve lived here. It’s a very international crowd. I go to church here on Sundays. It’s like going to the U.N.”

For more information about the St. John Neumann, the shrine, and the new museum, visit: stjohnneumann.org