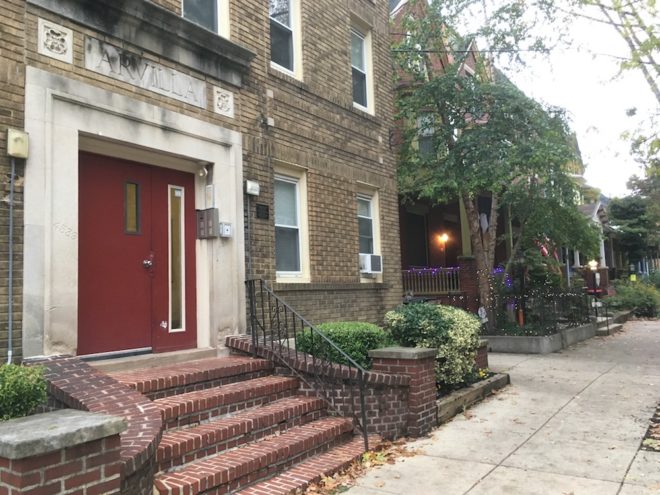 Residents of the Arvilla, a low-income apartment complex at 4537 Osage Avenue, have until January 31 to vacated their homes. The owners, Mission First Housing Group, an affordable housing nonprofit, served tenants with eviction letters in October 2018. | Photo: JJ Tiziou

Last October the 18 residents of the Arvilla received notice that the building was being sold and that they had six weeks to vacate their homes. The apartment complex at 4537 Osage Avenue is owned by affordable housing nonprofit Mission First Housing Group. The residents, low-income individuals and families whom receive housing assistance, were expected to find new homes as the holidays approached. Meanwhile, building was put on the market by Rittenhouse Realty Advisors, advertising its prime location, the high rents a new owner could charge to students and young professionals, the ease of evicting current month-to-month tenants, and the possibility of a tax abatement on the property.

When neighbors caught wind of the evictions they quickly formed a response with two priorities: stopping the evictions and addressing the rapid changes happening in Spruce Hill and West Philadelphia. Organizing under the name “Protect Arvilla Residents,” the group’s efforts quickly achieved two victories. Mission First pushed back the eviction date to January 31, claiming the original eviction notice was made in error and offered modest moving assistance to residents. In mid-December, Mission First agreed to make a presentation on the issue at a Spruce Hill Community Association meeting. In early January, nearly three months after the initial eviction notice, Mission First agreed to a sit-down meeting with Arvilla residents in the office of Councilwoman Jannie Blackwell.

The community support for Arvilla residents has grown rapidly, from a few neighbors on the block meeting in a coffee shop to dozens showing up at the Spruce Hill meeting in December. The turnout for the meeting was so high that many supporters could not even fit into the venue. Instead, they ordered pizza and held a vigil outside. Recognizing the financial hardship that the eviction has posed, neighbors have also started a GoFundMe campaign, which has raised nearly $15,000 to support moving expenses and provide residents with a financial cushion during the move.

The Arvilla was built in 1940. The three-story apartment building has 16 one and two-bedroom units. Mission First, whose mission is to “develop and manage affordable, safe and sustainable homes for people in need,” purchased the building in 1994 and has been managing it since. Current residents have been living at the property ranging anywhere from seven months to 50 years. 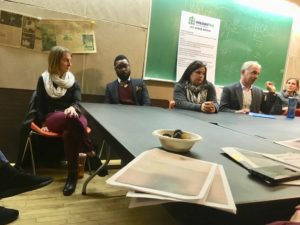 Mission First’s core priority is to create sustainable housing and preserve affordable housing for local residents. Yet, at a community meeting at the Spruce Hill Community Association on December 17 they revealed a business model that seemingly undermines these goals. Mission First claims that they selling the Arvilla because they cannot afford the work that would be necessary to make the property livable. Mark Dietcher, Mission First’s director of business development, spoke at the meeting, stating that “the cost of modernizing and preserving affordable housing in this building are higher than it can cover with its limited resources and current outside funding.” “These properties really need, every 15 to 20 years, to have a big capital infusion or else they are at risk,” said Dietcher. Mission First claims it does not have the budget for these kinds of repairs and so they sell their buildings when they can no longer maintain them. Dietcher explained that this is how they have kept their organization above water for 25 years. But conducting business this way makes it nearly impossible for residents to have stable, long-term housing and it undermines the work of preserving affordable units.

Meanwhile, Mission First’s alleged tendency to avoid repairs is reflected by the experiences of tenants. One resident reports not having running water for almost two years, while others have inadequate heat. The building is also infested with pests. One tenant, who requested anonymity, explained the impact of the neglect: “We don’t matter to them. Obviously, if all of us have to keep a coat on. I gotta turn the oven on and sleep with a whole outfit on and two blankets just to stay warm. We are not the priority. The money is.”

The neglect is nothing new and has led to a $5 million lawsuit in Washington D.C., where residents banded together after extensive lead and mold exposure in Mission First properties led to long-term health problems.

Meanwhile, Spruce Hill is losing another 16 units of affordable housing at a moment where the neighborhood is rapidly becoming more expensive. Mary McGettigan, a fourth generation West Philadelphia resident and co-founder of the RCO West Philadelphians for Progressive Planning and Preservation, explained how the area is transforming into a neighborhood where “only the well-to-do can afford to buy.” The sale of the Arvilla to market rate is part of this trend. “That’s part of why I object to the sale of the Arvilla apartments,” said McGettigan. “As the neighborhood gets whiter, and better educated, and richer, affordable housing is going away. People that live there, they’re our neighbors. We need to make an effort now.”

According to reports from the Philadelphia Coalition for Affordable Communities, in West Philadelphia housing costs increased by 98% between 2000 and 2012 and are continuing to rise rapidly. Across the city, the rate of market-rate construction far outpaces the rate of affordable units and far outpaces changes in median income. In the same 12-year period that housing costs rose 98% West Philly’s median income dropped 11%. The loss of affordable housing also has racial ramifications, as the changing housing market typically pushes out people of color. In this same 12-year period West Philadelphia’s Black population in the most gentrifying areas dropped 29% as the white population rose.

On December 7 a group of concerned neighbors did a walk through of the Arvilla. Afterwards, residents sat on chairs in the lobby and talked for over an hour. Some have lived in the apartment complex for decades. One resident has been there for half a century. They spoke about neighborhood history, both the social, like who lived where when and whose kids played with who, and the institutional, recalling neighborhood businesses that have come and gone. Long-time residents are an essential part of preserving a city’s social and cultural history. And yet as neighborhoods rapidly redevelop and become more expensive, older neighbors, and the memories they carry, are often some of the first people to get pushed out.

Architecture is often a central focus of preservation conversations, but affordability, stable housing, neighborhood composition, and people have an important role in the dialogue as well. What is lost when affordable housing is eliminated is the people and the stories that give neighborhoods life. Displacing people means displacing the social history and knowledge of a place. Organizations in the business of creating and preserving affordable housing are not just preserving individual buildings or structures, but preserving neighborhoods and communities. 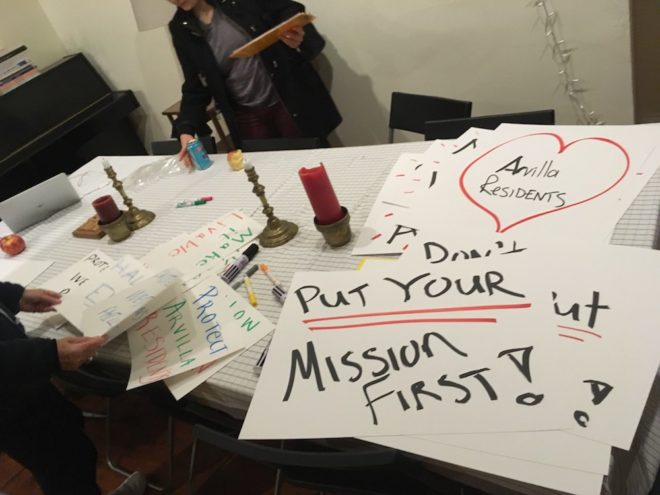 The eviction is also a damaging interruption to personal lives. Residents of the Arvilla include an 80 year old who has lived on the same block for 50 years and young children moving in the middle of a school year. The apartment complex is within the catchment area for the Penn Alexander school, a nationally acclaimed elementary school. The area has seen a rapid decrease in affordable housing in recent years, and the cost of buying a house in the neighborhood has tripled. For the children that live at the Arvilla, moving means losing access to an excellent educational opportunity as the school increasingly is only accessible to families that can afford to live in the neighborhood.

Relationships and networks are built on a local level with neighbors. Moving even 10 blocks can disrupt networks of support, community, and friendship. Mission First is offering residents placement in homes across the city, often in neighborhoods were their tenants have no relationships or history. One anonymous resident described her relationship to the neighborhood and perspective on moving, saying “It’s a great area. The kids love it. It’s quiet.” Another said simply, “I would like to stay.”

Some residents have already relocated. Others are still trying to figure out where they will go. All tenants are expected to leave by January 31. While the new owner has not been announced, Mission First has told residents that they are finalizing a sale now.

Meanwhile, City Council members have started paying attention. On January 16 Councilwomen Jannie Blackwell and Helen Gym met with Mission First, residents, and neighbors to discuss the sale, what was next for the residents, and Mission First’s practices. Mission First first bought the Arvilla with public funds, and they continue to receive funding from the city to purchase, renovate, and maintain properties. They fund much of their work through the low income tax credit program, which funds affordable housing in Philadelphia and across the country. Their extensive use of public funds makes their practices especially important for local government and taxpayers to follow. While residents at the Arvilla have inadequate heat and running water, their top-paid executive made over $400,000 in 2017.

Despite the news that the Arvilla sale is moving forward, along with the evictions, the concerned neighbors who formed Protect Arvilla Residents will continue their fight. They are discussing policy options with staff from Councilwomen Blackwell and Gym’s office to address larger affordability issues and are continuing to support the Arvilla tenants during their move. The group also plans to keep the pressure on Mission First by raising awareness of their business practices across the city to prevent future evictions.