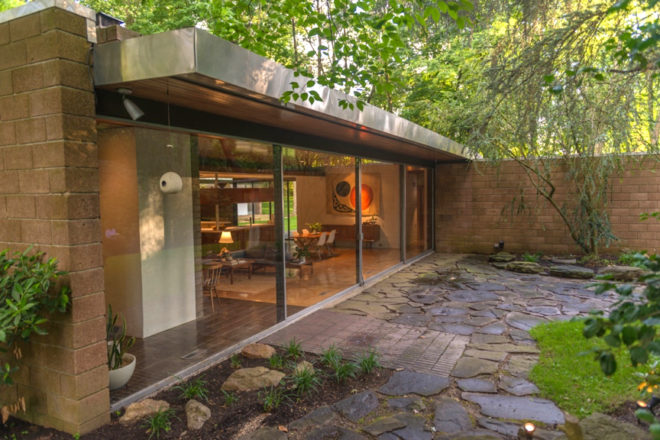 Move over mansard roofs and crown molding. Folded plates and waffle slab are coming to a classroom near you. This year Thomas Jefferson University’s College of Architecture and the Built Environment will debut their new graduate studies program in historic preservation. The school will join the ranks of Penn and Drexel’s renowned programs. What sets Jefferson’s program apart is the bold move to focus on the conservation and protection of mid-century architecture and the opening of their Center for the Preservation of Modernism. Classes will officially begin in September.

Valuing and preserving Modernist architecture remains a hot, divisive topic in Philadelphia, but it is slowly gaining momentum. In 2017, District Health Center #1, a teal-tinted testament to municipal buildings of the Atomic Age, was added to the Philadelphia Register of Historic Places. At the same Historical Commission meeting the Dorothy Shipley White House, an abandoned concrete home in Chestnut Hill designed by Mitchell/Giurgola, was designated historic and important as well. At Penn, the university put $80M towards renovations and upgrades into Eero Saarinen’s Hill College House, a sublime example of campus architecture from 1963. While the topic of preserving mid-century buildings still works some locals into a blustering rage, a global effort to save Modernist architecture is well underway. That puts Jefferson’s new graduate program ahead of the curve and at the forefront of progressive historic preservation.

“By spearheading efforts to address issues raised by Modernist architecture, Jefferson is taking the lead, not only in Philadelphia, but nationally and internationally,’” says Suzanne Singletary, director of Jefferson’s new historic preservation program. “Currently we have partnerships with two centers for Modernism in Europe—Anhalt University in Dessau, Germany, enabling our students to study at the iconic Bauhaus Building, and with the Terragni Archive in Como, Italy, opening up rich research opportunities for students.” The program will focus on real world projects with onsite instruction says Singletary. Faculty and students will also work with clients to address community-based issues.

Jefferson’s recent acquisition of the Hassrick House fortified the architecture school’s commitment to Modernism in the curricular focus for their new M.S. in Historic Preservation. The university bought the late 1950s home, designed by famed Austro-American architect Richard Neutra, which is adjacent to the school’s East Falls campus, for $1.9M in 2017. The Center for the Preservation of Modernism will be located in the SEED Center next to the Hassrick House, which will be utilized for instruction and programming. The Center itself will establish an archive for scholars and students and be used as a venue for lectures, symposiums, and exhibitions that examine issues surrounding the preservation of Modernist architecture.

“Early and mid-century modern architecture is the next preservation frontier as these building stocks age,” says Singletary. “This period presents unique challenges in terms of condition assessment, material restoration, structural stabilization and curtain-wall facade retrofitting, while embodying distinctive social, cultural and historical significance. The Center for the Preservation of Modernism will be a catalyst for research that addresses the protection and conservation of these structures.”