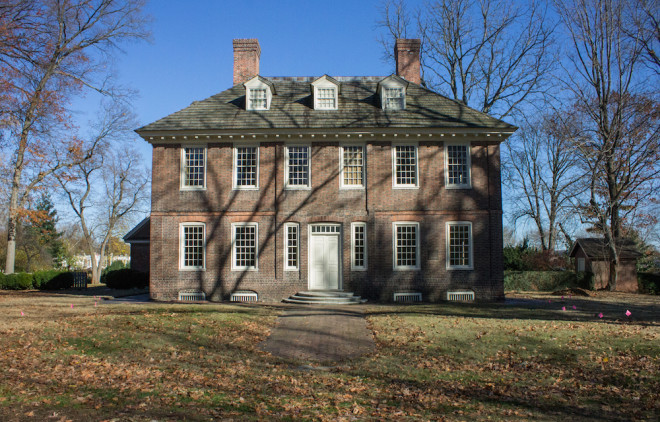 Stenton, a house museum in North Philly, will celebrate the legacy of Dinah, a former slave, with their project Pew-funded project, Inequality in Bronze.| Photo: Michael Bixler

I have always been a bit jealous of the other sections of Philadelphia. South, West, the Riverwards, and even the Northeast have recognizable identities that translate their neighborhood history. North Philly, where I grew up, hasn’t been so lucky. Gentrification, redlining, and a rabid real estate grab is displacing African American families who have lived in and historically defined neighborhoods in the area for generations. The sinking, man-made disaster of the Logan Triangle and the mix of gun violence, deep poverty, minimum opportunities, and blight has left the Black legacy of North Philly in near social and environmental ruin.

I spent my teenage years in and around Logan and Nicetown. I kept my head down, but that only kept me from seeing what was around me. A a kid I never really noticed Stenton, the former plantation home of James Logan, a Quaker who was the Provincial Secretary under William Penn and later became a mentor to Benjamin Franklin. Construction of his home began in 1723, either during or shortly after his term as mayor of Philadelphia. Records kept by Logan indicate that the cellar was dug by Clement Plumsted’s negroes, but nothing more is mentioned. After completion, the home was staffed with slaves and indentured servants who served the needs of the family.

Stenton had multiple roles as a means to produce income via trade with indigenous peoples, the Caribbean, Europe, and India and China and as a place of quiet contemplation and study, entertaining guests, and being the de facto governor’s mansion. During Logan’s time at Stenton he orchestrated the displacement of the Lenni Lenape from the area. He amassed a fortune and acclaim that made him one of the most influential people in Philadelphia. His life ended in 1751 after a series of strokes left him partially paralyzed and unable to communicate.

In learning about Stenton, I was introduced to Dinah, whose narrative began late in Logan’s life. I say “her narrative began” because, like many slaves, the story of Dinah’s life is largely lost to history. Dinah was a part of the dowry property due on the marriage between William Logan, James’s son, and Hannah Emlen. She was freed from enslavement in 1776 when the Society of Friends required its Quaker members to free their slaves or be expelled. She stayed on at Stenton as paid help. According to the records at Stenton, she succeeded in having her husband, who was ill, brought to live with her as a slave instead of staying separated. Over the years, their grandchild, Cyrus, would also be freed during her tenure along with her daughter, Bess.

What makes Dinah stand out is the tale that she saved Stenton from the British Army during Germantown’s occupation. Legend has it that she tricked a group of soldiers who where looking for deserters into capturing a previous group that was on the grounds to burn down the mansion. Dinah told the soldiers that the first group actually consisted of deserters which lead to their capture. Her quick wit became a story that was later memorialized with a plaque placed in Stenton Park during the early 20th century and later moved to a corner on the grounds of the estate. 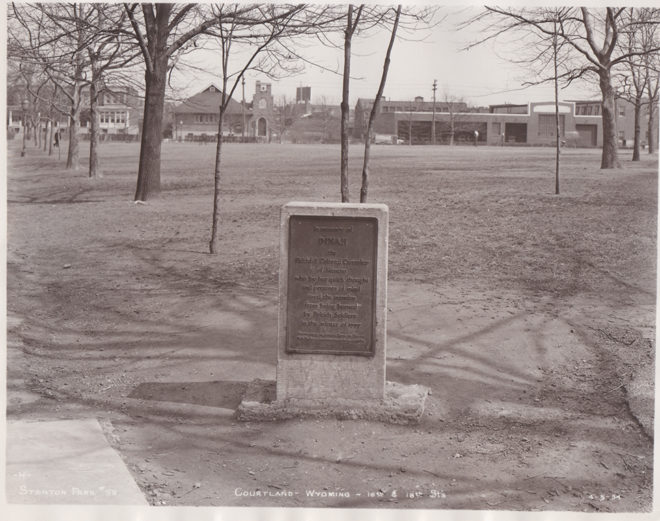 A plaque dedicated to Dinah was placed in Stenton Park around 1912 by the Colonial Dames and the Site and Relic Society of Germantown (now Germantown Historical Society). It has since been moved to the house museum. This photograph was taken in 1934. | Image courtesy of Stenton

Stenton’s new public monument project, Inequality in Bronze, funded by The Pew Center of Arts and Heritage, aims to both establish a proper memorial for Dinah and to open the doors for discussions about race. The project is currently in the beginning stages and an artist has not been chosen for the design of the monument.

“It was both the acquisition of the James Logan memorial from the Ridgeway Library and the current conversations about the Confederate statues that brought Dinah back to the limelight,” said Laura Keim, curator of Stenton. “Since she is a big part of Stenton we felt it was time to give her a proper memorial.”

During a recent, two-day event the staff at Stenton invited the surrounding community to the house museum to ask how they would like Dinah memorialized and what can be done to make the museum more available to neighbors. Programs at Stenton like the History Hunters Youth Reporter Program have been successful in engaging the the surrounding community, but most neighbors remain largely uninvolved with the house museum. Staff at Stenton hopes to increase community engagement with ongoing programming surrounding the Inequality in Bronze project.

The placement of the Dinah memorial on the grounds of the former plantation house is long overdue. There aren’t many statues in America celebrating people of color and far too many commemorating those who benefited from slavery. In Philadelphia, there is currently only one public monument dedicated to an individual African American figure, the Octavius V. Catto memorial installed on the southern apron of City Hall in 2017. Staff at the house museum see the Dinah monument as a symbolic step to let the residents of 19140, 19141, and 19144 know that Stenton also belongs to them.

At one of the breakout sessions, a Temple University student and former History Hunter at Stenton suggested making the Dinah memorial faceless and visually accessible to all no matter their education level, age, or background. After hearing her suggestion, I began to see Dinah not only as a person, but as a defining story that North Philly needs to reexamine and further solidify its rich African American history. Perhaps this monument will serve as a potent rallying point that took time to arrive, but was well worth the wait.