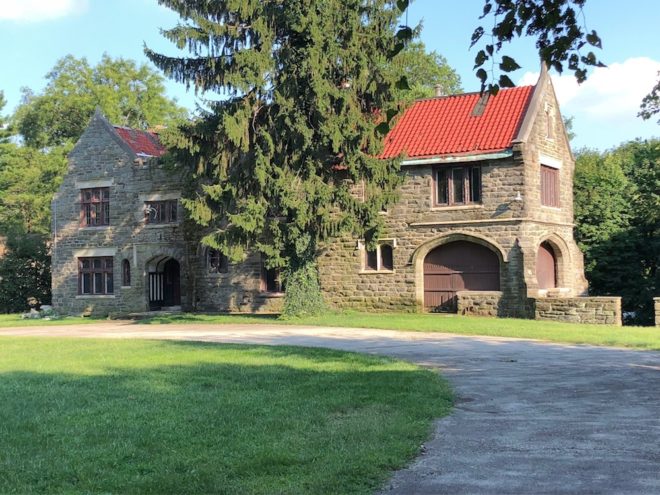 Mrs. Baugh’s Cottage in Overbrook Farms was nominated for placement on the local register by the Philadelphia Historical Commission in 2007. After pushback from the home’s owner, St. Joseph’s University, the nomination was tabled indefinitely. The building was neglected for over a decade by the university and is now in a state of ruin. St. Joseph’s University plans to demolish the historic home once the nomination is withdrawn. | Photo: Hidden City Staff

Eleven years ago the Philadelphia Historical Commission nominated a stone Tudor Revival cottage in Overbrook Farms for placement on the local register of historic places. Today Commission staff is withdrawing their nomination for the late 19th century stone cottage at 5920 City Avenue, which will clear the way for owner St. Joseph’s University to demolish the 127-year-old home after a decade of neglect.

The property is historically known as Mrs. Baugh’s Cottage. The architect, George T. Pearson, was a contemporary of famed Philadelphia architect Frank Furness and his designs worked within the same idiom of High Victorian style, exhibiting dramatic asymmetries, polychromy and pattern, and juxtaposition of stylistic historic features.

The nomination, which was was submitted by the PHC staff in February 2007, was recommended by the Committee on Historic Designation. However, the full review was stalled after representatives of St. Joseph’s University, the property’s owner, expressed concern about its condition and the potential impact it would have on reuse options.

Later that year, the Commission agreed to grant an “indefinite continuance,” essentially tabling the nomination for the foreseeable future to allow the university and the community to continue to negotiate options for moving forward. In the intervening years St. Joseph’s University allowed the historic property to deteriorate. It is now in a state of irreparable disrepair.

According to Paul Chrystie, Deputy Director of Communications for the Department of Planning and Development, the nomination was never reviewed simply because no interested parties—St. Joseph’s University, the neighbor who inspired the nomination, nor anyone else—had ever requested that it be reconsidered.

The nomination finally resurfaced on the agenda for the 674th meeting of the PHC, which took place on October 12, 2018, where it was requested that the nomination be withdrawn.

When contacted for comment about why the Commission sought to withdraw the nomination, Chrystie said, “The nomination became relevant again when the property owner submitted a demolition permit application. When the Historical Commission staff reviewed the property, they found that deterioration over the years, accelerated by a tree falling on the building, which left it in a condition where the staff felt that designation was no longer warranted. Rather than seek to advance a nomination for a property the staff did not feel warranted designation, the request to withdraw the nomination was put forth.” 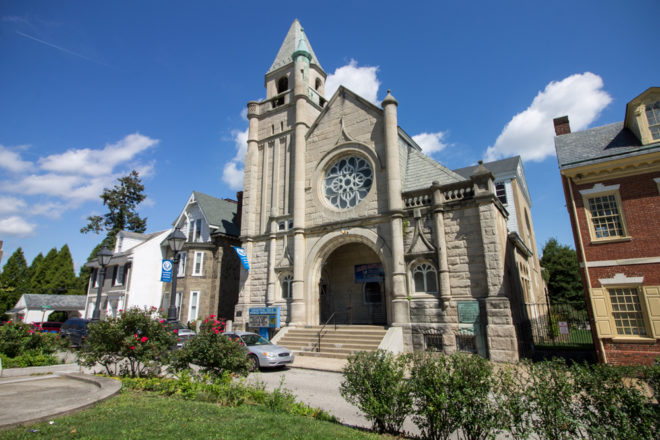 Thaddeus Squire, Chair of the Overbrook Farms Club (OFC), the local RCO for the area, spoke out at the October meeting in opposition to the petition to withdraw, requesting a continuance on the matter. (Full disclosure: Squire is the founder of Hidden City Philadelphia and the founder and director of Hidden City’s parent organization, CultureWorks Greater Philadelphia) The continuance, Squire explained, would provide OFC the opportunity to work with St. Joseph’s University on developing a compromise and allow the neighborhood group to independently assess the property’s condition. The request was supported by Paul Steinke, Executive Director of the Preservation Alliance.

Following the site visit and months of negotiating, Squire plans to withdraw his objection. After touring the property with an architect, an engineer, and other community stakeholders, he explained that preliminary inspections indeed confirmed that the property was in extremely poor condition. He said the cottage is nearly to the point of requiring a total dismantling and reconstruction. Representatives from St. Joseph’s, their legal counsel, and a representative from the engineering firm they are working with were also present for the visit.

St. Joseph’s University could not be reached for comment by the time of this story’s publication.

Squire said that all three parties—St. Joseph’s University, Overbrook Farms Club, and the Historical Commission—bear some responsibility for the outcome of this case. He believes, however, that it is ultimately the PHC’s “specific and willful” interpretation of the local ordinance that allowed them to be free of any “burden of stewardship,” of the site.

Given the current circumstances, St. Joseph’s University and OFC have reportedly reached an agreement in lieu of designation. OFC has agreed not to object to the withdrawal of the nomination, and in return the university has agreed to the following terms: thoroughly document the property prior to demolition, retain the historic stone wall and gates that border City Avenue, allow a company specializing in architectural salvage to save as much of the historic building materials as possible, and allow OFC a say in the design review process for any new construction that takes place on the site. The formal agreement is expected to be signed by both parties.