Four years ago we created Hidden City Mercantile and filled it with the kind of ephemera we as ardent Phila-philes love to collect, figuring that anyone who reads the Hidden City Daily would probably would get a kick out of that stuff, too. Then we realized that offering these historic maps and prints and posters as perks for our annual fund drive would beat a free coffee mug any day.

So here we are, on the cusp of 2019, with the chance to double the $35,000 we raised last year thanks to matching grants from the Wyncote Foundation and Newsmatch. We also have a couple terrific new perks to tell you about.  First off is a humorous/macabre print created from a 1920s Philadelphia Transit Company safety stamp and screen printed by our friend Marcus at Fishtown Engraving. Second is a remarkably detailed pictorial map illustrating the location, insignia, uniforms, equipment and history of Philly’s 18th and 19th century volunteer fire companies. Plus, we have the 2019 Hidden City Insta-calendar hot off the presses, and our book is available once again thanks to a second printing.

Now more than ever, independent journalism needs the support of readers like you. DONATE to the Hidden City Daily annual fund drive to help us raise $35,000, (which will really equal $70,000 since each donation will be matched dollar for dollar). Click HERE, pick your perk–and give! Do we need to mention these perks make great gifts for the holidays? We’ll ship them within a few days to make sure they get to you in time.

Not your typical tourist souvenir! Photographed with love by Hidden City’s Project Director, Pete Woodall, each of these six postcards says “Philly” in a different way. Perfect for framing if you don’t want to mail them. Please note: The image shown here is a compilation of all six images. You will receive separate postcards of each. 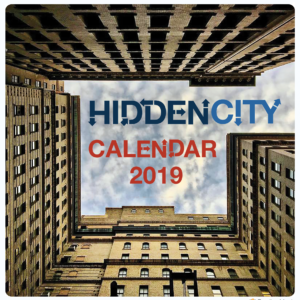 Donate $55–2019 Hidden City Insta-Calendar This year’s Hidden City calendar is a little 8×8 cutie with all the images taken from our Instagram feed. The photos from Mike Bixler and Brad Maule are a combo of the pretty and the gritty–just like Philadelphia! 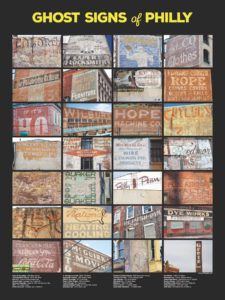 Hidden City project director Pete Woodall has been photographing ghost signs for years, and he’s collected 28 of his favorites here–from beloved signs like the fisherman above Franklin Fountain on Market Street, or the Reedmor Books above Milk Boy on Chestnut, to obscurities like Moore Push Pin on Berkley Street and “Ketchup Kid” on West Venango. Measures 18×24. Printed on glossy, 100 weight book stock. Addresses for each sign are listed at the bottom. 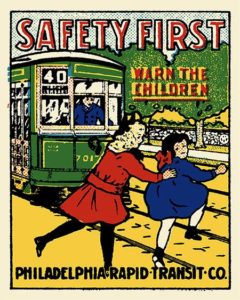 Screen printed on heavy card stock paper at Philadelphia Engraving, this 10×12 (image 8×10) beauty is filled with terrific detail, such as the number of the trolley, along with some macabre humor: is the bigger girl in red pushing her friend onto the tracks or attempting to save her? 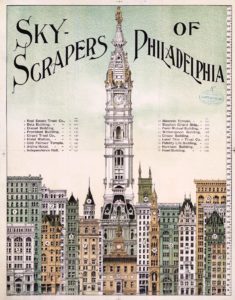 Hidden City’s custom reprint of this late 19th-century lithograph. We love this image for the detailed renderings of some of our favorite Philadelphia buildings, and for the measuring stick running up the right side of the print. Measures 18×23. Printed on matte heavyweight paper 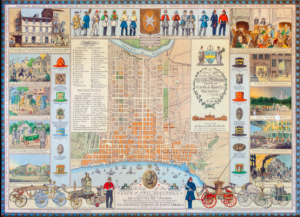 Before 1870, when Philadelphia created a City Fire Department, volunteer fire companies did the work of putting out blazes. This remarkable pictorial map created by the Insurance Company of North America in 1937 not only shows the location of each of the companies, but also their colorful uniforms, insignia, equipment and more! Click here to check out a much larger image that shows all the details. Philadelphia: Finding the Hidden City delves into one of America’s greatest and yet least understood cities. Written by Hidden City Daily co-founders Nathaniel Popkin and Pete Woodall, and photographed by one of America’s most lauded architectural photographers, Joseph E.B. Elliott. Rather than a nostalgic elegy to loss and urban decline, the book marks Philly’s vivid layers and living ruins. Keep it for yourself or gift it! Hardcover, 200 pg. Temple University Press, 2017.