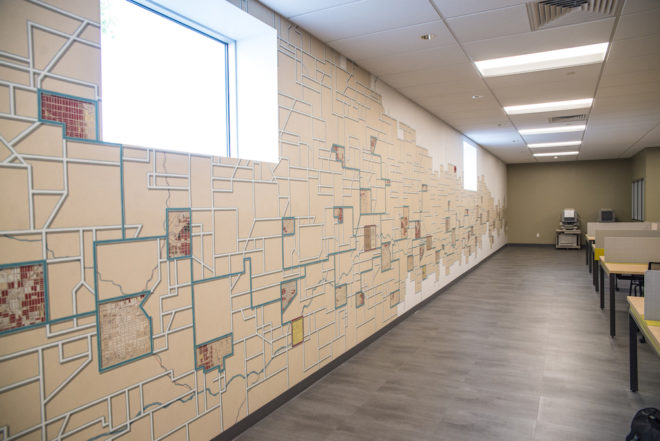 Today Philadelphia City Archives celebrated the opening of their new 65,000-square-foot research center at 548 Spring Garden Street. The vast, indispensable collection of historical, cultural, and administrative municipal records joins Yards Brewery and the recently opened Northern Liberties Target store inside the former Destination Maternity warehouse complex. The new, state-of-the-art facility features a modern repository, a public research room, and an interactive mural, Charting a Path to Resistance, by Philadelphia artist Talia Greene created in partnership with the Office of Arts, Culture, and the Creative Economy’s Percent for Art Program. The artwork highlights figures of the abolitionist movement in Philadelphia and explores the history and impact of the discriminatory practice of redlining in the city with augmented reality technology via a free smartphone and tablet app.

Philadelphia City Archives currently contains 20,000 cubic feet of holdings dating back to 1701, beginning with the Charter of the City of Philadelphia signed by William Penn. City Archives was established in 1952 in a effort to preserve municipal records not in current use–from photographs, lithographs, and maps to birth and death certificates to official records on the Planning Commission’s efforts to manage urban blight. According to City Archives staff, the most popular uses of the repository are for genealogical and social history research. In addition to the main collection, an additional 138,000 cubic feet of documents from the City’s Records Storage Center will be included in the move.

Right: “Dale Fields, looking over rogue’s gallery of pictures of criminals dating back to the middle of the 19th century, behind him are various city department payroll records dating back to the early 1900s.” Philadelphia Evening Bulletin, 1959. Left, from 1972: “Historic documents are displayed by archival examiner Lisa Ellick at the temporary new headquarters of the City Archives in City Hall.” Philadelphia Evening Bulletin, 1972.| Images courtesy of Temple University Libraries, Special Collections Research Center

City Archives relocates to Northern Liberties from their former offices at 3101 Market Street where they have been headquartered in the basement and first floor of the old Philadelphia Bulletin Building since 1998. The move, which began in November, is expected to take roughly nine months to complete. They were originally located in the basement of the Commercial Trust Building at 1424-1426 Chestnut Street. Records were also held in the basement of City Hall and in the Terminal Commerce Building at Broad and Callowhill Streets. The offices of City Archives took up temporary residency at City Hall in 1972.