We’ve been saying this for a few years now, but 2018 really did feel like a year where significant changes–much of them highly-anticipated–came to Philly’s built environment. 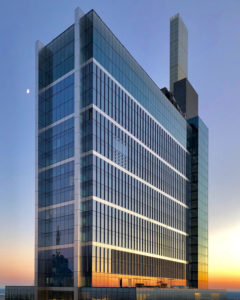 A refashioned LOVE Park opened without skateboarders and a replacement National Products building with its faked but convincing historic facade began filling up with renters; some might say the original versions were better. The iconic Curtis and Bourse buildings emerged from renovations as upscale food destinations. In West Philadelphia, the development of uCitySquare, a joint project of Science Center, Cambridge Innovation Center, Wexford Science and Technology, BioLabs, and Ventas continued apace with the opening of its first mid-rise tower.

A significant extension to the Schuylkill River Trail from South to Christian street closed part of the gap between the existing boardwalk and Grays Ferry Crescent, while the Fairmount Water Works Trail and Boardwalk opened, affording views of the small island wetlands behind the Philadelphia Museum of Art. We like how at this point all of these Schuylkill projects have come to an understanding about the materials, finishes, and street furniture that they will be using going forward.

In fact, there’s much to like about all of the above developments but whether in scope or aesthetics, context or contributions, they weren’t the most transformative ones of 2018. What ties our winners together are linkages–past to present, city to nature, interior to exterior. For those, read on. 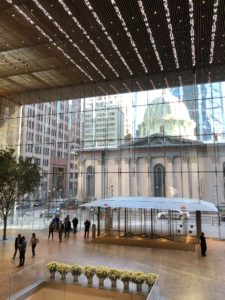 Who needs Amazon when we have Comcast? With its second skyscraper, the 1,121-foot, $1.5 billion Comcast Technology Center, the media giant has risen to the occasion by using corporate architecture to positively impact downtown. Granted, Foster + Partners’ glass tower isn’t exactly groundbreaking, but its interiors are. An installation by the world-class contemporary artist Jenny Holzer and an extensive use of wood (from slatted sides and ceilings to distinctive woodblock flooring) integrate the building into the life of the city and elevate its performance as public space. An elegant and reasonably priced cafe offers a great addition to the lunch scene (as I witnessed one recent afternoon, CEO Brian Roberts thinks it’s good enough to entertain Steven Spielberg). The expansive glass opens up respectful vistas of, and a connection to, the two towers’ stalwart neighbor, the Arch Street Presbyterian Church, and the Robert Morris Building beyond. 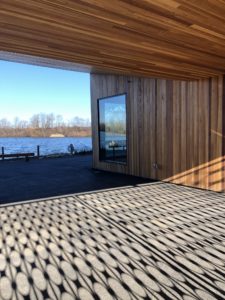 Discovery Center in East Fairmount Park has a grand exterior, perhaps more so than its relatively modest mission demands. Designed by Digsau for the offices and services of the local branches of Audubon and Outward Bound, its long flat planes emerge from the Fairmount Park landscape seemingly out of nowhere, promising an oasis amidst the sea of chickenwire fencing that surrounds a decommissioned reservoir/now native habitat. Serene and bold at the same time, it reminds me of some of the best of modern Japanese architecture, not only in its forms and materials but in its embrace of nature. Your first steps through the portal of a hand-forged steel gate (it looks like wood lattice) positioned in the middle of a 500-foot facade of shou sugi ban will pretty much take your breath away. 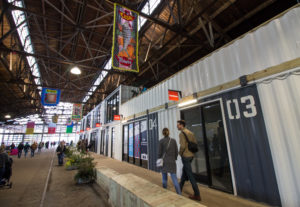 Among the many civic achievements of Race Street Pier (2011) was the crystallization of the allure of its near neighbor to the south, Cherry Street Pier. The realization of that tease came this fall, with a little piece of tactical urbanism designed by Groundswell Design Group and Interface Studio Architects. Drawing on the lessons of GDG’s wildly successful Spruce St. Harbor Park–namely that people like beer, street food, and things to do along with their views–it’s a fun and dynamic environment that aims to delight. Someone please give the folks at Delaware River Waterfront Corporation (the force behind all three spaces) an award for recognizing that interventions don’t always have to take dozens of years and hundreds of millions to be transformative. 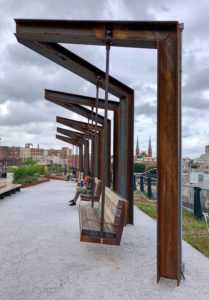 The idea of the Rail Park was a big meh to me–until it opened. As was the case with Cherry Street Pier’s first weekend, though, the excitement and interest in the unveiling that morning (of course I went!) was tangible and encouraging. If they do nothing else, such projects foster a dialogue about how we use our urban spaces, and for that alone they deserve high praise. Sure, The Rail Park’s first phase is just a little spit of a thing and sure it can’t boast the views or (as of yet) the landscape vision of New York’s High Line. But Studio Bryan Haynes nailed it with a plan that’s firmly of its place and with enough design twists and turns (literally) to keep things interesting–and swinging (also literally). 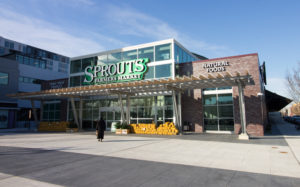 The debut of Philadelphia’s first Sprouts Farmers Market, the Arizona-based chain with a natural/organic bent, was particularly noteworthy because it’s filled a demonstrable market need on South Broad Street. Part of Lincoln Square, an otherwise ordinary development that offers 322 apartments and a retail coterie that includes a tired trio of Target, Starbucks and Pet Smart, its real significance is its success as a bold example of both historic preservation, of the 1876 Philadelphia, Wilmington & Baltimore Railroad depot, and adaptive reuse. Though the corporate strip mall treatment of the entrance to the market fails to acknowledge the urban setting, the historic architecture of the train shed, or the contemporary design of the multi-use apartment building, Sprouts gets shouts simply because of how it’s smartly wedged into the historic train shed. That and the free samples. 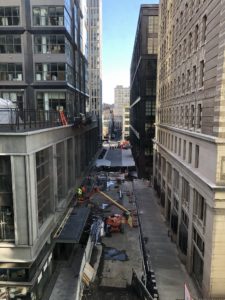 Looking east toward East Market, with the under restoration Stephen Girard and under construction Girard apartment hotel tower in the foreground | Photo: Nathaniel Popkin

East Market touts itself as “dynamic” and while that’s an overstatement, I kind of like it there. An expert mix of new construction, historic restoration, and adaptive reuse that keeps it from feeling bland, this refashioning of the downtrodden former Snellenburg Department Store site into a true mixed-use pedestrian street by BLT Architects is something we haven’t seen before. A new hotel and more local retail (Federal Donuts!) suggest things will only get better. Best of all, the development adds vibrancy to the urban fabric that surrounds it, allowing new vantage points to gaze on the Reading Terminal, PSFS Building, and the former Horn & Hardart at 11th and Ludlow Streets. 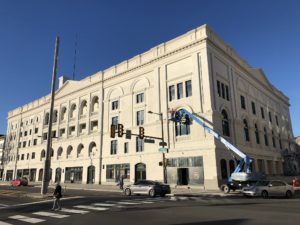 It’s hard to believe that The Met was ever allowed to devolve into a ruin, but after years kept alive by the Holy Ghost Headquarters Church, developer Eric Blumenfeld’s 2013 plan for the Oscar Hammerstein opera house has come to fruition. The careful $56 million renovation by local firm AOS Architects is ruby velvet and gilded surfaces–and bars, lots of bars. It’s been modernized (of course) but with much of its astounding plaster ornamentation recreated, it looks like a concert hall should. Visitors say the sightlines are almost uniformly great, too. Take that, Academy of Music. 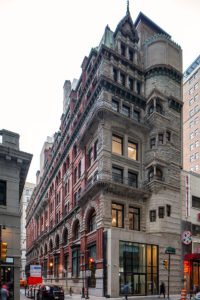 Day in, day out the miracle of the 1887 Keystone National Bank Building, designed by Willis Hale, has proven the most pleasurable for me, located as it is on a prominent corner that I pass a couple of times each week. When I first saw the spiffed up red brick and cleaned-up facade in full reveal of the “Hale Building” I do believe I let out an audible gasp. While I’m not in love with the new entrance on the Chestnut Street and I’m not expecting much from the interiors, I thank JKRP Architects for a careful revival of this masterful mashup and making my walks around town that much more pleasurable. 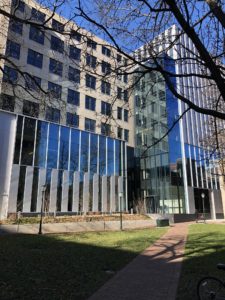 Long under-utilized, the stately West Philadelphia Trust Building has renewed presence on Walnut Street thanks to a smart restoration and intervention from Toronto-based KPMB. Freshly engraved with the name of its tenant, the University of Pennsylania’s Ronald O. Perelman Center for Political Science and Economics, the 1925 Art Deco building has been seamlessly linked to a new glass-and-aluminum tower that echoes the older structure’s massing and window cutouts. Interiors, too, are elegant with clean lines and a dramatic staircase that suggests both the old and the new bones of the intertwined university building. 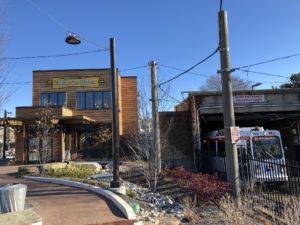 With outdoor seating and beds of native plantings, Trolley Portal Gardens makes a there out of something whose assets–historic Woodlands Cemetery, a charming tunnel–belie its utilitarian functions (catching and disembarking from mass transit). The wood structure of the Trolley Car Station café echoes the form of the adjacent tunnel and bumps up the space from an amenity for transit users to a gift for the entire neighborhood. 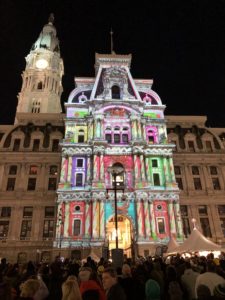 Robert Indiana’s LOVE was returned to a renovated Love Park, the Parkway Holocaust memorial expanded, and the better-in-concept-than-reality (thus far) sculpture Pulse finally debuted at Dilworth Plaza. From Winter Fountains, the luminous orbs that decorated the Parkway, to Sea Monsters HERE, an Insta-ready serpent that wreaked playful havoc at the Navy Yard, it was certainly a big year for public art. My favorite, though, came courtesy of a brilliant burst of color and movement from the geniuses over at Klip Collective: the City Hall Deck The Hall Light Show. Granted, this iteration differed only slightly from the version the group premiered last year. But because it so lovingly touted City Hall as a dazzling piece of architecture and because it comes from a homegrown operation that’s rapidly gaining a national reputation, I’m giving it the nod. Next year, guys, maybe switch it up?

JoAnn Greco Freelance journalist JoAnn Greco writes about the fascinating people, places, trends, and stories found in the worlds of urban planning, arts and culture, design, hospitality, travel and, of course, Philadelphia. Her work has been published in the Washington Post, Art & Antiques, Toronto Globe and Mail, Amtrak’s Arrive, PlanPhilly, Penn Gazette, and dozens of others. She lives in Bella Vista.