Architecture Trips The Light Fantastic in Philly After Dark 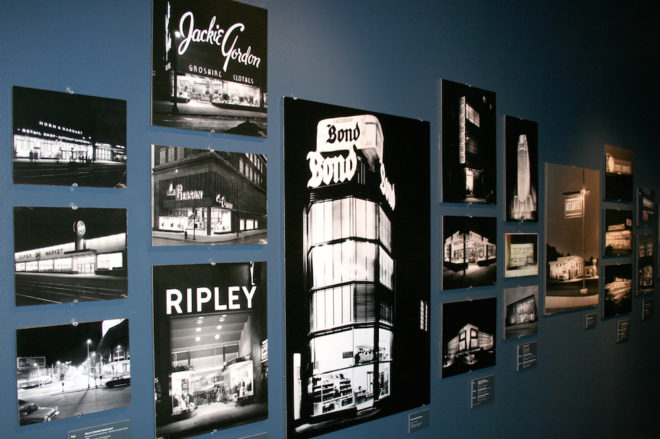 The Athenaeum of Philadelphia’s current exhibition, Philly After Dark, provides an uncommon look at some of the region’s architectural landmarks–both monumental and ordinary. On display are drawings and photographs of the built environment as seen at night, representing different time periods and drawn from a variety of sources.

The effect of darkness on architecture is the central focus of the show. While images of familiar historic buildings are interesting, a section of photographs and renderings of theaters is revelatory, proving that some building typologies were made for the dark. Glowing marquees, towering neon signs, and dramatic up-lighting clearly drove the designs of many movie palaces. The shadows created by this new era of artificial lighting were as much design considerations as the structures’ physical characteristics.

The Athenaeum’s collections provide the majority of the images on display, including a selection of 20th century architectural photographs by Jacob Stelman. The photos, many of which were scanned directly from the original large format negatives, are crisp and striking in their compositions. Stelman’s commercial commissions capture everyday structures like a Penn Fruit supermarket in Wynnewood and an icebox-style Atlantic gas station, with highlights and shadows turning the scenes into realized Hugh Ferriss compositions. Illuminated signage was a major, new element in 20th century architecture, and capturing its essence was a particular skill of Stelman, according to Bruce Laverty, exhibit co-curator and the Athenaeum’s Curator of Architecture. 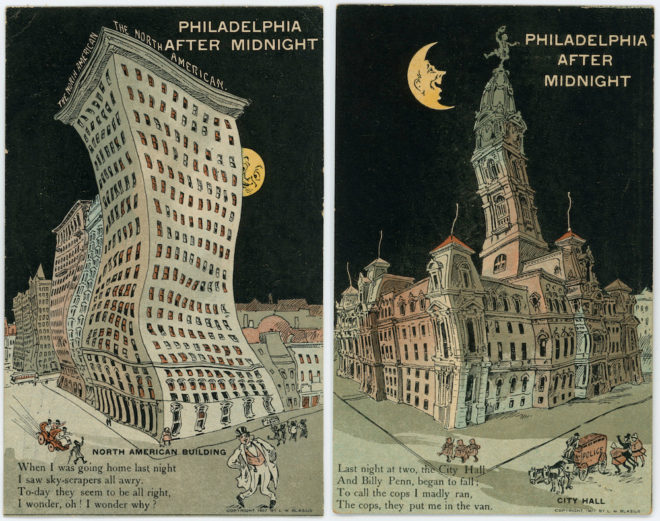 Two of the six postcards from the Philadelphia After Midnight series. Left shows the North American Building in woozy, drunken delight. Right shows City Hall and the statue of William Penn teeters perilously from his suddenly wobbly perch. | Image courtesy of the Robert M. Skaler Postcard Collection, Athenaeum of Philadelphia

The decoration of the Haas Gallery was carefully planned by Laverty and staff to match the theme. A deep hue of blue bathes the walls like the night sky, and the room’s signature ornate chandeliers remain dark with only spotlights highlighting the images from above. Subject matter has come from a variety of sources, and among the non-architectural features of the exhibit are early photographs of lightning over the city captured by William N. Jennings, which were provided by the Franklin Institute.

Laverty says that the inspiration for the exhibit came not from photographs, but rather a group of comic postcards obtained by the Athenaeum as part of the Robert M. Skaler Postcard Collection. Real photo postcards of Philadelphia streets from the same collection were the subject of an Athenaeum exhibit in 2017, but Laverty knew that the comic illustrations also deserved to be highlighted. These cards were from the series, Philadelphia After Midnight, that imagined Philadelphia landmarks in an impaired state.

Comic postcards became popular in the early 20th century when a change in postal rules allowed for images to fill entire fronts of postcards. Large companies and countless enterprising individuals then got into the market, publishing postcards on a variety subjects and themes. Some of the most popular photographic cards depicted local landmarks, but there were few comic postcards that depicted actual buildings.

The Philadelphia After Midnight series was copyrighted by L.W. Blasius in 1907, the same year the post office began allowing for full-front images. The series came from the imagination of an unidentified artist. In addition to iconic buildings like City Hall and the Union League, he or she also illustrated then-new skyscraper office buildings like the Land Title Building and Real Estate Trust Building. Each structure was twisted and bent as if seen through a funhouse mirror. All were accompanied by visually inebriated characters on the street level with jovial men-in-the-moon peering down knowingly at the shenanigans below. Each postcard included a poetic verse making some reference to the building pictured or the city itself.  The artist’s work may have gotten its start in the European market with the series, What the Moon Sees!, in which sites in London like Piccadilly Circus are shown in precisely the same style as the Philadelphia cards. 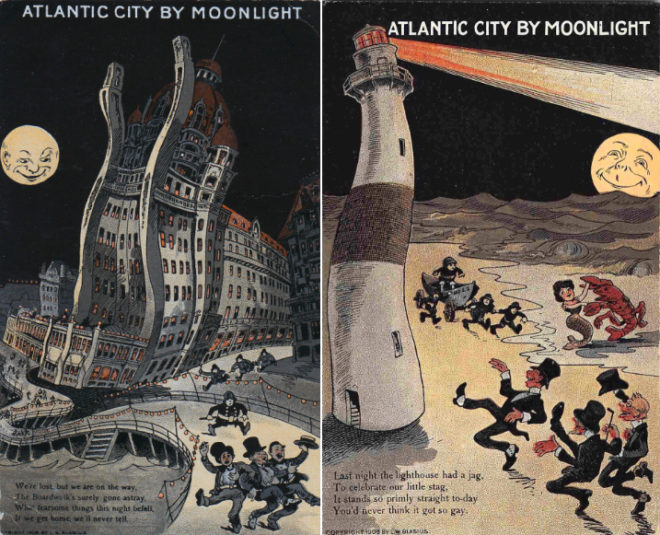 Postcards from the Atlantic City by Moonlight series. Left: The Marlborough-Blenheim Hotel, demolished in 1978, was completed two years before this card’s 1908 copyright date. Its towering pillars made the hotel the perfect subject. Right: The Absecon Lighthouse cuts up the coastline with midnight revelers. | Images courtesy of Moore’s Postcard Museum

The artist continued the theme in other American markets, producing unsigned, six-card sets for New York City and Colorado, where his western landscapes resemble the style of Krazy Kat newspaper comic artist George Herriman. A set of Jersey Shore cards drawn in the same style and published in 1908 were mostly interchangeable, using the same drawings of boardwalks with the titles Atlantic City by Moonlight, Asbury Park by Moonlight, and Wildwood by Moonlight. There were a few exceptions. The unusual design of Price & McLanahan’s landmark Marlborough-Blenheim Hotel in Atlantic City was a common subject for postcard photographers and a natural choice to be given the drunken treatment.

Philly After Dark is now on view at The Athenaeum of Philadelphia, 219 S. 6th Street, until December 28. Admission is free. Gallery hours are Monday through Friday from 9AM to 5PM.

Bruce Laverty, Curator of Architecture at the Athenaeum, will give a guided tour of the exhibition on Wednesday, December 12 at 5:30PM. RSVP for the free event HERE.