Rare Books Department At FLP Examines A City In Transition 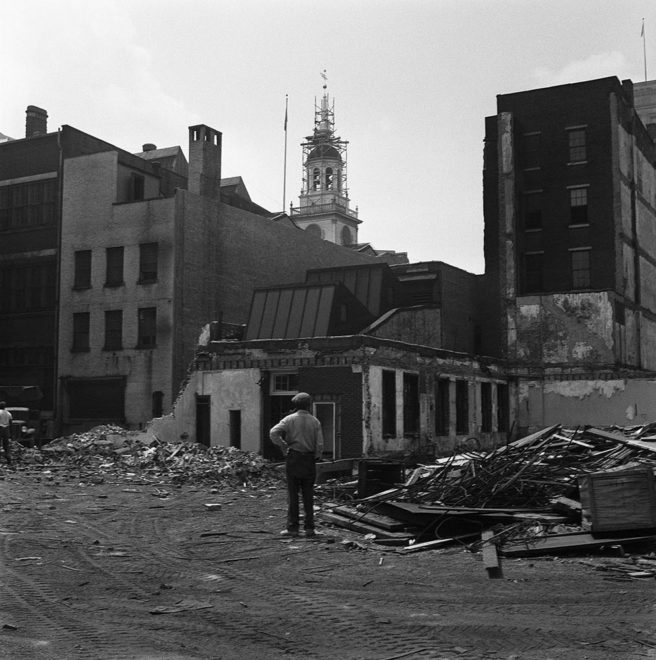 Selling history at the expense of history. The construction of Independence Mall in the 1950s decimated blocks of commercial buildings dating back to the 18th and 19th century. This photograph from 1950 gives a small taste of the demolition along 5th and 6th Streets. Scaffolding surrounding the bell tower of Independence Hall can be seen in the background. | Image courtesy of the Free Library of Philadelphia Print and Picture Collection

“Things are changing very rapidly right now,” said exhibit co-curator Alina Josan as we stepped into Philadelphia: The Changing City currently on display in the Rare Book Department at the Free Library of Philadelphia. “We wanted to have an exhibit addressing a lot of the major shifts happening in Philadelphia,” explained Josan.

The exhibit takes on this task by displaying photographs, maps, and drawings from the past three centuries of Philadelphia’s history, with a strong focus on the 19th and early 20th century. For anyone concerned about current urban issues like segregation and redlining, gentrification and displacement, pollution and environmental justice, and access to transportation, the exhibition provides a profoundly educational overview. It simultaneously historicizes these topic and shows the role decisions, big and small, play throughout Philadelphia’s timeline.

One example is the way our rivers have been used. Once sites of commerce and industrial production, their function has been transformed over the past century. The exhibit addresses toxic waste cleanup along the Schuylkill River and the shift from public green space to industrial production and coal yards back to public green space. This work is not finished, as is evidenced by the Philadelphia Energy Solutions refinery that still causes environmental concern in neighborhoods surrounding the facility. But, from looking at the documents in the exhibit, we can see how Philadelphians organized to fight industrial pollution and create more open spaces for public use beginning in the 1920s and gaining significant momentum in the last three decades.

Left: Steamboats, carriages, and bicycles offer rest and recreation along the Schuylkill River in the 1890s. Right: By 1924, the Schuylkill River had become almost entirely industrialized. The waterway below the Philadelphia Art Museum was used as a municipal dump. The accompanying caption reads,” The Municipal Dump in Action, West Bank of the River, Below the Art Museum. See the Filth Floating on the Waters.” | Image courtesy of the Free Library of Philadelphia Print and Picture Collection

The exhibit also looks at redlining and the evolution of public housing in Philadelphia. There are photos of the historic Black Bottom neighborhood, which was destroyed as part of the University of Pennsylvania’s expansion in the 1950s. There is a facsimile of a 1934 map of the city that became a model for redlining around the country.

In the first part of the 20th century, housing reformers fought for racial justice by advocating for housing codes and fair rent prices. As African Americans migrated up from the South beginning in 1910, their housing options were very limited. Most people settled in the 7th Ward, where many homes were in disrepair and white landlords exploited the newcomers with exorbitant rents. Housing reform organizations formed as a result to demand equal rights and better housing standards. Their activism laid the groundwork for the City to establish housing codes requiring basic amenities like indoor plumbing, electricity, and general maintenance standards that landlords had previously denied tenants. Reformers successfully pushed for housing available to African Americans to either be demolished and rebuilt or refurbished and renovated to meet these standards. As a result of the improvements existing residents of these neighborhoods gained both better, and safer, housing and greater affordability. While these organizations were not uncomplicated, they demonstrated a way that activists shaped the social fabric of the city during this period.

The push for housing reform gained momentum after a tragic event, when a tenement in the 7th Ward collapsed in 1936. Many of the issues that activists had been bringing up for years–sinking floors, caving walls, leaking roofs–suddenly gained increased attention as the fatal consequences of neglect became obvious. City Hall took action by forming the Philadelphia Housing Authority. While this was a victory in many ways, public housing tended to be segregated, with some developments established only for white people and others for African Americans. The story is one without perfect victories, but the history of public policy behind our housing system offers crucial context to where we are today, both in our current successes and our potential, future failures. 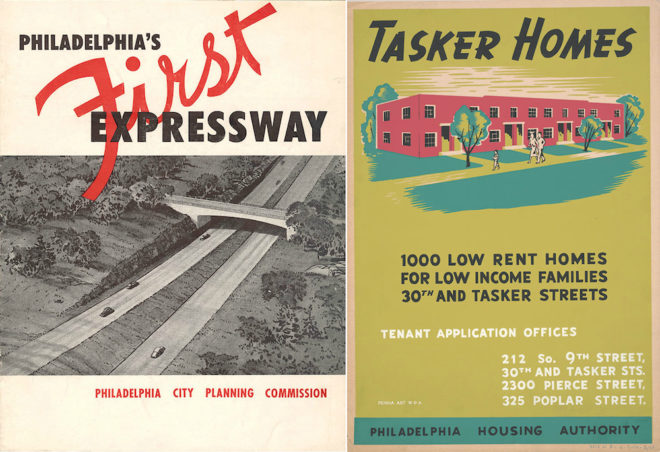 The exhibit’s interpretation of transportation in Philadelphia is also a story about community resilience. In 1959, hundreds of homes in South Philadelphia were demolished to make way for I-95. When a crosstown expressway was proposed to cut across South and Lombard Streets in 1961, residents organized to shut it down. The proposed highway would have connected I-96 and I-76, uprooting countless residents, primarily in the predominately African American 7th Ward. Communities in the area knew that the social and economic fallout from the project would be catastrophic, so they fought back and eventually succeeding in killing the proposal. Today, largely unchecked real estate development is displacing whole communities, namely long-term African American and working class residents. This segment of the exhibition reveals how our city is both managed by municipal government and how it is constantly being reshaped by investors staking their claim.

The curators of Philadelphia: The Changing City–Alina Josan, Megan MacCall, Janine Pollock, Karin Suni, and Laura Stroffolino—did an impeccable job showing the crucial ways that activist interventions have worked alongside official city planning in creating Philadelphia as we know it today. Equally important, it shows how citizens victories are nuanced with each accomplishment, leaving much more to be done. The exhibition illuminates critical histories behind Philly’s most persistent social issues, providing context as we continue to grapple with the pressing issues of real estate development and displacement, affordability, segregation, and the struggle to become a smart, inclusive city.

Philadelphia: The Changing City is now on view in the Rare Book Department of Parkway Central Library until April 13, 2019. For hours of operation, guided tours, lectures, and special events see their exhibition page HERE.