How to Save A Slice Of Neighborhood Green Space

If all goes as planned, a triangular sliver of public green space at League Street and Washington Avenue will officially become Mary Street Park. This is the current rescue mission of David O’Donnell. The professional tailor and ardent Queen Village neighborhood activist is indefatigable, with an impressive track record of creating successful pocket parks. But it hardly comes easy.

Although the turf in question is small enough to be almost symbolic and what’s being salvaged so simple to the naked eye, people sometimes get in the way with their egos and eccentricities, But O’Donnell is a masterful actor who begs, cajoles, and will chastise on cue. He wields a lumbering bureaucratic process like a gardener troweling a delicate, pretty flower into fresh, damp soil.

“Queen Village is becoming overdeveloped. You have to grab land while you can,” says O’Donnell, who is engaged in a full court press to do just that. His hard-won playbook may inspire other Philadelphians to accomplish similar ecological and political sleights of hand. The outpost he now champions has been lovingly tended by neighbors over the years, a miniature island of green at the noisy confluence of Washington, League (formerly known as Mary Street), and Front Streets. The little pocket park is currently the tip of the triangular footprint of Distinctive Elements Kitchen Design at 113 Washington Avenue, and could potentially be sold for development. The kitchen remodeling center itself has a fine picture window view of the salutary garden. “It’s the last Queen Village land save,” cautions O’Donnell.

O’Donnell is experienced at the how-to of city pocket parks. He gestures towards Moyamensing Point Park, a derelict patch of land at the intersection of Christian Street and Moyamensing Avenue that was once a barren blacktop. The reclaimed space now features carefully designed plantings, curved granite curbing, and public seating and lighting–a model of successful land transformation.

O’Donnell figures Mary Street Park will take about two years–from neighborhood leafletting, to negotiating the challenges of City Hall, to collaboration with landscape designers, to watering the thirsty plants once all is said and done.

“If I give you money will you stop calling me?” O’Donnell laughs. For a year he badgered the owner of a nearby Wawa for funds to help build Moyamensing Point Park. O’Donnell’s career was in selling custom suits by appointment to executives, so he is no stranger to cheery sales persistence. The owner finally relented to O’Donnell’s entreaties for funds. That was just one donation along the path to a lush, green civic park. 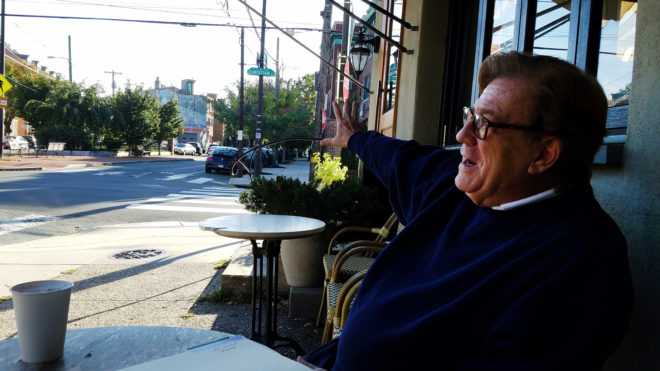 O’Donnell’s vision for Moyamensing Park started with tree plantings in the surrounding area. “There wasn’t one tree around here,” he recalls. Then he campaigned for the removal of traffic lights at the intersection of Moyamensing Avenue, Christian Street, and 2nd Street. Cars would race to beat the red lights and careen into sidewalk trees. O’Donnell has had four trees destroyed in front of his historic Christian Street residence. The hazard dropped precipitously when the traffic lights were replaced by stop signs.

O’Donnell built a pleasing, safer backdrop even before the finely-detailed granite curbed park itself was initiated. It is now capped by the “World Famous Sculpture,” a would-be Calder mobile made of rusty, painted metal that O’Donnell scavenged from the trash. He is amused that the sculpture, not nailed down, has been known to curiously shift locations within the park. O’Donnell next created nearby Beck Park, which started with the removal of large, thorny bushes, revealing new potential for a small, unpromising patch of land.

Here the Queen Village resident shares his playbook for what it takes to create a neighborhood park from scratch.

It begins humbly with the dropping of leaflets in doorways. “Making things right makes me happy,” says O’Donnell, undeterred when encountering a grumpy resistor to permanently secured green space. He initially had a low response rate that was insufficient to prove interest in Mary Street Garden. He now has six volunteers for the site. O’Donnell discovered that the City owns the land at 100-106 League Street, which is labeled an empty lot, and that he could acquire it for a dollar from the Neighborhood Garden Trust to hold in perpetuity. 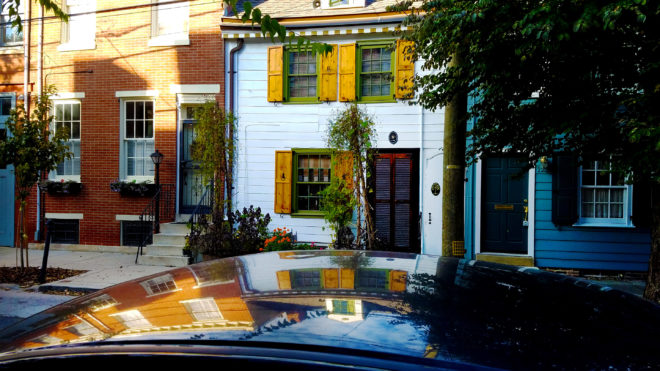 A 1790 city ordinance banned wooden residences such as these remaining ones on League St. adjacent to the proposed Mary Street Park. Door to door leafletting was the first step towards garnering support for the neighborhood project | Photo: Joseph G Brin

He appealed to Councilman Mark Squilla’s office with photos and a letter of intent. A staffer steered him to the Garden Trust’s website. He met with their director at the future park. As he puts it, “The goal is first to get it off the rolls so it’s ours forever. Then go for funding.”

Step Two: Form a Committee and Give Your Project a Good Name

There is undeniable strength in numbers. Consensus building and energetic volunteerism are key ingredients in the development of a new park. Then there are numerous meetings and a to-do list of tasks to be laid out. Mary Street Park’s first meeting at Shot Tower Recreation Center yielded a wish list for a new flag pole, new railroad ties to retain raised earth, a bench, lighting, water sourcing, tree removal, and more indigenous plantings.

“It’s all in the name,” as the expression goes. Taking the earlier street name of Mary Street rather than the current League Street was a nod to the long history of the area. O’Donnell has also been thinking that the initial project label of “Mary Street Garden” should instead be “Mary Street Park,” more substantial for funding purposes. These subtleties are important both to inspire support and to add depth and meaning to the whole endeavor.

“Because we have to raise money for these quality of life things, we need everybody’s contributions,” says O’Donnell. Sometimes he’ll raise the money for an architect or landscape designer before he has adequate funds for actual implementation. But it is important to propel the effort with determination and enthusiasm. Patience for the long game staves off discouragement that tanks many a great idea. O’Donnell’s triumph with Moyamensing Point Park began as a concept in 2003. Its groundbreaking was in 2011.

Step Four: Get it Done

Chat people up, work connections, promote volunteerism, engage professional design and construction services, call in favors, nudge politicians–do whatever it takes to bring a pocket park to fruition, says O’Donnell. It can take years of hard work, but, in the end, he says the effort is worth it and can be a lot of fun.