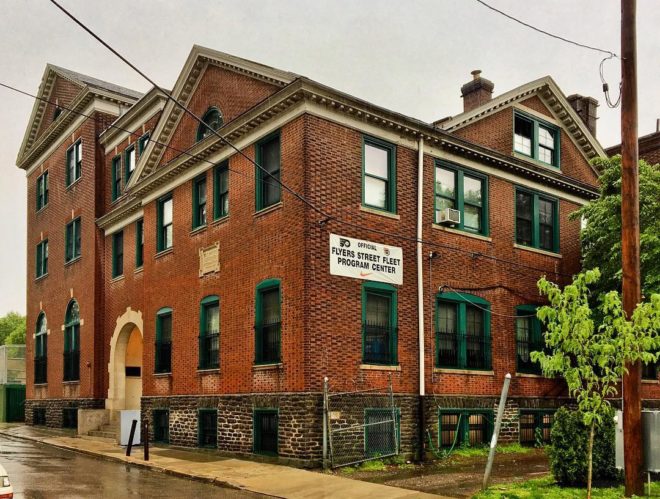 Germantown Boys and Girls Club at 23-25 W. Penn Street has been a neighborhood battleground over historic preservation for over two years. Today all stakeholders involved have came to a compromise at a special meeting held by the Philadelphia Historical Commission. | Photo: Bradley Maule

On Tuesday, October 9 the Philadelphia Historical Commission held a special meeting to review the nomination for historic designation of the Germantown Boys and Girls Club at 23-25 W. Penn Street. The meeting lasted just under ten minutes and held an unexpected, but welcomed outcome: peaceable compromise between stakeholders.

After the meeting was called to order and introductions made the property owner’s attorney, Jerald Goodman, announced that an official agreement between the nominators, architectural historian Oscar Beisert and the Penn Knox Neighborhood Association (PKNA), and the property owners, the Boys & Girls Clubs of Philadelphia (BGCP), had been reached.

The agreement, a result of discussions between involved parties and the Historical Commission, stipulates that both the nomination and the demolition permit for 23-25 W. Penn Street will be withdrawn. BGCP will instead pursue adaptive reuse of the structure and, per procedure outlined in the agreement, will consult the nominators on any future modifications made to the exterior. 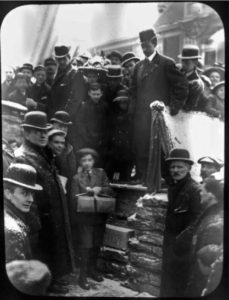 The battle over historic designation of the Georgian Revival clubhouse has been drawn out and, at times, quite heated. For over two years, tensions around the potential redevelopment of the property have been strained. The situation has stirred up deep-seated feelings about ownership, access, and racism among neighborhood residents. Those in favor of BGCP’s decisions were concerned that designation would restrict the club’s ability to develop the property in accordance with their mission. At the time, this included demolishing the existing structure to build a new $20 million facility and ice-skating rink, expected to be an important new asset to the community.

Others, including the nominators, preservation activists, and other community groups, argued that an alternative site would be more suitable for the proposed development and that the existing building could be repurposed and incorporated into a different plan. Neighbors also worried that the proposed plan would create traffic issues along W. Penn Street, which is a narrow one-way residential street.

At the culmination of a contentious Historical Commission meeting in May 2017, where the nomination was up for review and several passionate arguments on both sides of the issue were presented, the vote was postponed and it was suggested by Jonathan Farnham, executive director of the Historical Commission, that the issue might warrant a special meeting.

Discussions at an Historical Commission meeting last June hinted at a potential agreement. After more than a year of community meetings and attempts at reaching some amicable accord, both parties presented an update on their progress. With the hockey and ice-skating rink removed from their master plan, the BGCP discussed a scaled-down project that put adaptive reuse of the historic building back on the table.

At this morning’s meeting, consensus to accept the agreement was swift and unanimous among Historic Commission members. In a brief discussion before the vote, the body seemed to agree that the move represented an important compromise for all parties. Some small, logistical details were cited regarding the process of how exactly the demolition permit will be withdrawn and how the agreement will be carried out moving forward. 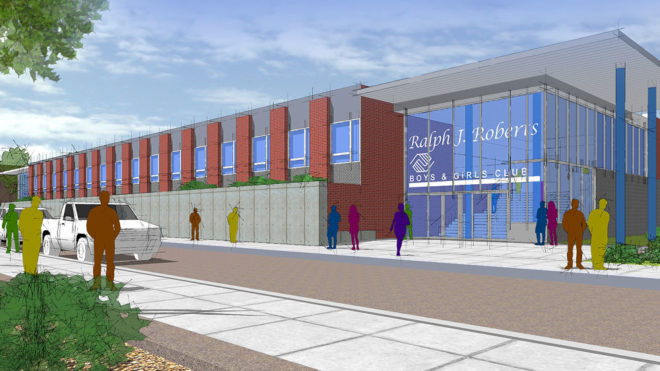 A 2015 rendering of a new $20 million facility and ice-skating rink funded by Comcast that would have replaced the original building. | Image: Comcast

Per the conditions of the agreement, the property owners will preserve the exterior of the building, and all exterior changes will be subject to consultation by the nominators. Any changes submitted to L&I will first be reviewed by the nominators. It is understood that BGCP will also pursue additional new development on the site.

The move represents a somewhat encouraging step in a preservation environment where compromise is all too foreign, though an unusual one in entrusting oversight and enforcement of preservation standards to a local neighborhood association. The logistics of how the Agreement is maintained, upheld, and enforced between the two parties remains to be seen.

Patrick Grossi, director of advocacy for the Preservation Alliance of Greater Philadelphia, told Hidden City Daily that “after years of meetings, stalled starts, and intense negotiation, the Preservation Alliance is relieved that a workable compromise could be reached and that this deserving property will be preserved. We’re also happy to advise the consultation process if and when Boys and Girls Clubs of Philadelphia is ready to move forward with plans, and assuming our assistance is requested by Penn Knox neighbors.”

According to a report published by PlanPhilly, some are left wondering why the Commission would so readily shirk their duty to vote on the designation of property, which would give them the legal authority to review changes and enforce regulation. Why instead agree to outsource regulation and enforcement to a volunteer-based group?

While the answer to that question remains unclear, BGCP’s reluctance to have the property listed on the register appears to attest to the fact that designation at the City level, and subsequent regulation by the Commission, is viewed as an overwhelming burden to property owners. Considering that Philadelphia offers virtually no local incentives that reward owners properties that are listed on the local register, perhaps it’s a point that should be taken to heart.

For now, at least, the 120-year-old Germantown Boys and Girls Club is safe from demolition.