Harvey Finkle: Photographer Seeks Justice For The Other

The photographer has amassed thousands of potent images in his studio and has generated numerous publications. Increasingly, he endeavors to broadcast to a wider audience. He just hung a show of his photographs of South Philadelphia Jews at Shivtei Yeshuron (aka “The Little Shul”)  at 2015 4th Street near Snyder Avenue in time for the Jewish High Holidays. He also has work on the walls at El Compadre, a Mexican restaurant on 9th Street where the chef is an acquaintance. A photography book on the New Sanctuary Movement is also in the works.

Over 25 years, Finkle has immersed himself in diverse cultures and subscultures with a persistence and commitment that runs deep. Finkle’s work spotlights the universal impact of social, political, and cultural forces in this country and across the globe. He seeks out and wades into those swift currents, camera firmly in hand, to record eloquent testimony against a retreat from civic engagement and responsibility, covering the gamut from labor and public housing activism, death penalty abolition, education, child poverty, immigrants, the deaf community, and the homeless.

Self-taught, Finkle discovered Abstract Expressionist painters but, in terms of photography, had “no interest in that Steiglitz shit, I just wanted to shoot a fuckin’ camera.” When he saw strikingly spare, black and white photographs by Harry Callahan, he says, “I fell in love with his work. It was understandable abstraction.” 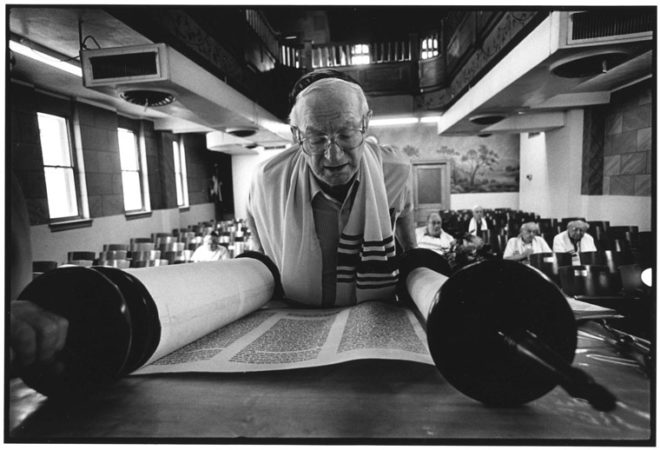 Nate Pepper in 2000 at Congregation Adath Shalom at Marshall and Ritner Streets. The synagogue is now a Cambodian Buddhist temple. The image is featured in Finkle’s new exhibition of Jewish communities in South Philadelphia. | Photo: Harvey Finkel

Always politically attuned, Finkle’s first career was as a social worker doing casework for the PA Department of Public Assistance. Seeing abuse and the inertia of stubbornly unsolved cases moved him into “a broader conception of why people are in the situation they’re in. Social issues are systemic, they all touch each other.” The camera became Finkle’s way of raising greater public consciousness. He wanted his photographs to have a positive impact on people’s lives by gaining an insider’s understanding of complex problems.  Social agencies hire him, promoting their causes by widely disseminating his resulting images. “I want my work to be used that way.”

“I hope to be invisible. My cameras are quiet, small, and black,” says Finkle, who shoulders both film and digital cameras these days. He sometimes will pre-set his camera speed and other settings for purely intuitive shooting. Jazz musical improvisation inspires him as well. He once saw John Coltrane, famed Philadelphia saxophonist, lead his fellow musicians to soar with spontaneous invention.  Translating jazz into photography, Finkle says, “The moment you see and feel is when you take off.”

One connective tissue in all of his work and exhibition catalogs are the reverberations from his long study of immigration. Finkle, whose own family immigrated from Russia and Poland to the United States in the 1890s, knows that the cycle never ends. Waves of Italians, Irish and Jews landed at Philadelphia’s docks beginning in the early 20th century. “They all come for the same reasons. To be safe. To practice their religion. To make a buck. To educate their kids. The Irish were cast out by the British, the Italians were discriminated against [here] for being swarthy and the Jews… because they were Jewish,” says Finkle with a half smile. They have been supplanted by Cambodians, Nepalese, Mexicans and others in our time.

Finkle’s Philadelphia Mosaic: New Immigrants in America monograph illuminated nine distinct immigrant populations in black and white photographs interspersed with poignant quotes he collected on his visits with them. “Black and white is my art form,” Finkle says. 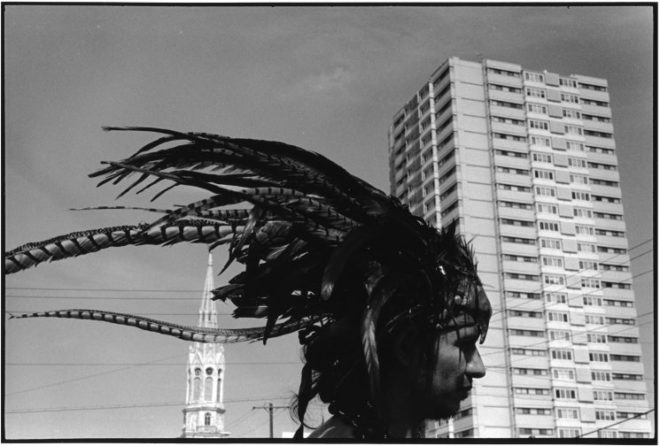 In a country where everyone, save the Native American, is an immigrant, racism, discrimination, and denial of opportunity are sometimes dredged up by those who have successfully worked their way into the fabric of American society and don’t want to look back. Finkle’s photographs, experiences, and social connections to new immigrants render globalism in very personal terms. He has broken bread with many of his subjects. After interviewing them he would laboriously transcribe their words until he found a court stenographer who could do the job more efficiently. It speaks to his ethnographic approach to photography. The warmth of his direct, unpretentious personality facilitates his connections with people and is reflected in the power of his rich and detailed chronicle of human migration.

A photographer’s exotic travels are not without risk. Finkle was once wandering through a North African outdoor market in Paris and spotted a couple of men conversing casually. Their profiles against a luminous white wall would make a stunning shot that he knew he could capture. The men paid him no mind. Suddenly, he was surrounded by a hectoring crowd. Someone tried to snatch his camera lens and Finkle knew he had to quickly surrender his film to escape unharmed. Decades later, he smiles at the beautiful shot that got away, still clear, fully developed, and fixed in silver in his sharp visual memory.

Finkle recalls a memorable train trip from Karachi, Pakistan, to Lahore. 15 to 18 hours clacking across a combustible, 110 degree foreign landscape in a stifling, packed compartment with a handful of other people who treated him as their guest, rocking along in a metal cabin, sharing bedding and food. “Here, try it,” one man said, naturally grabbing food from a friend’s plate to give to Finkle. Hospitality and generosity are endemic to the Pakistani Muslim culture, Finkle says admiringly. With his empathetic, photographic eye, he invokes the ancient and biblical admonishment, saying aloud, “Welcome the Stranger.”