Delaware River Waterfront Once A Hotspot For Millionaires

The Central Delaware River waterfront in Philadelphia has played host to a relatively large number of very wealthy people over time. Over the last few decades the city’s main waterfront has been lamented as having so much wasted potential, but that is quickly changing. As residential redevelopment on the river gains momentum, it is a good opportunity to revisit the Philadelphia millionaires who lived and worked there.

The most prominent tycoon to have resided along the Central Delaware was Stephen Girard (1750–1831). The French sailor, shipping magnate, and banker had his wharves at the foot of the embarcadero between Market (High) Street and Arch Street. Other Girard properties surrounded his docks, including his home and attached office i.e. “counting house” at 23 North Water Street and his warehouse at 31 and/or 33 North Water Street. 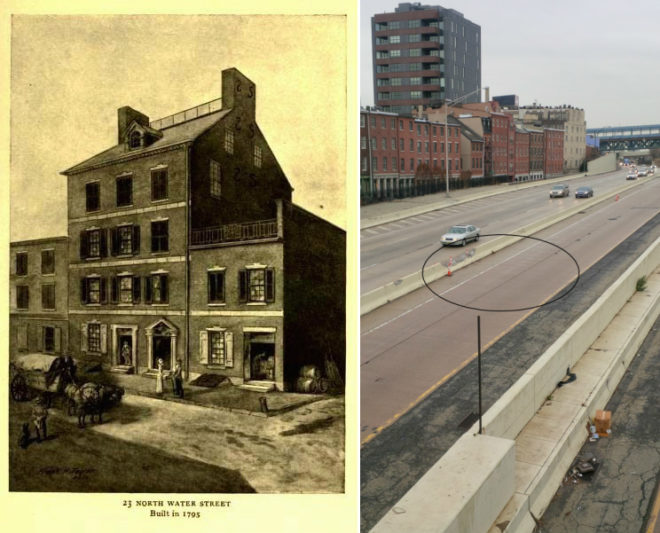 Right: Stephen Girard’s Water Street home and office was built in 1795. It was demolished in the 1840s to make way for a collection of commercial buildings. Left: The approximate location of Girard’s counting house is noted in this shot of I-95 from the Market Street overpass. | Images: Stephengirard.org and Harry Kyriakodis

Girard resided at his Water Street town house for almost 40 years. He lived with several young housekeepers, perhaps some of whom were mistresses, after he committed his wife to Pennsylvania Hospital in 1790. The daughter of a Philadelphia shipbuilder, Mary Lum had suffered a debilitating mental illness after several years of marriage, causing her to be prone to emotional outbursts and fits of violence. She spent the rest of her life in the hospital’s insanity ward. The situation caused Girard great sadness as he professed to love her dearly and he never had an heir.

As a result, Girard focused his efforts on working and making money. At his house, Girard managed his investments and land acquisitions to accumulate a vast fortune. Here he devised ways to use his money and personal credit to finance the War of 1812 for the United States. He entertained Talleyrand, Louis Philippe, Joseph Bonaparte (Napoleon’s brother and ex-king of Spain and Naples), and many distinguished French diplomats and refugees. Girard also spent much time reading the works of Voltaire, Diderot, and Rousseau. And he contemplated ways to bequeath his money, including the founding of a school for “poor, white, male orphans” and improving the riverfront by formally establishing Delaware Avenue, as well as other ways to improve his adopted city.

The Frenchman and his servants could gaze south from the tall mansion’s windows and rooftop balcony, searching for his cargo-laden vessels as they made their way up the Delaware River from around the world to dock at his wharves. He owned some 18 ships, and his packets—ships that sailed on a regular schedule—were the foremost line afloat at that time.

Girard grew old and lonely at his waterside home with only the wants of his business dealings to keep him occupied. He passed away at age 81 the day after Christmas 1831. He was the richest man in America when he died. His estate was worth around $7.5 million. At his home on the waterfront Girard’s  infamous 35-page will was read for the first time to his relations and others while his body lay in repose in the parlor.

The four-story house stood until the 1840s when it was torn down and replaced with stores. I-95 now covers the site completely. Indeed, how many southbound I-95 drivers know they are driving over the spot where the richest man in the country once lived?

The Delaware River frontage from Arch to Market Streets, showing that Stephen Girard owned a good amount of property on the waterfront. This entire area is now covered by Interstate 95. | Image from Philadelphia and Her Merchants: As Constituted Fifty and Seventy Years Ago by Abraham Ritter, 1860.

Another importer and exporter who did very well in Philadelphia’s river district was Nathan Trotter (1787–1853). Born on Elfreth’s Alley into a Quaker household, he lived and worked in this part of town all his life, plying his trade as a metals refiner and broker. His firm, Nathan Trotter & Company, was headquartered at 36 North Front Street for over 150 years. The storehouse remains standing and is now a condominium. Nathan Trotter & Co. is still in business in Coatesville, Pennsylvania and is the oldest metals manufacturer and distributor in the United States.

That both Trotter and Girard became so moneyed while living a mere block from each other along the Delaware River is remarkable. But there were others as well.

The one-time offices and warehouse of Frank W. Winne & Son are next to the Trotter building. Winne was founded in Philadelphia in 1895 and was the nation’s largest manufacturer, importer, and distributor of ropes, twines and packaging products—all in high demand during Philadelphia’s bygone mercantile period. The Winne buildings are now apartments and the Winne company is still based in the Philadelphia area.

This block of Front Street—north of Market Street—most epitomizes the thoroughfare at the peak of its commercial and maritime importance—at least the west side of the block. The east side has disappeared as a result of I-95. And, of course, comparable four-and five-story structures that once flanked both Water Street and Delaware Avenue are gone due to the highway.

Stephen Girard left the City some $500,000—an immense sum in the 1830s—for use in improving the riverfront area east of Front Street, primarily by adding Delaware Avenue alongside the river. Almost the whole rise in importance of the Port of Philadelphia is traceable to this bequest. Yet Girard was not the first to propose improving Philadelphia’s waterfront in this way. In 1820, Paul Beck Jr. (1757–1844) prepared a plan for improving the river’s edge between Vine and Spruce Streets. This was the first urban planning exercise in Philadelphia after the laying out of the city itself.

Beck’s scheme was for the municipal government to acquire all property from Vine to Spruce Street east of Front Street and then clear away all extant buildings, wharves, streets, and so forth. A series of uniform warehouses would be built between Front Street and a wide new avenue by the river. Each warehouse would stand on its own 40-by-100-foot block separated by alleys. These improvements were estimated to cost $3,651,000—an astronomical sum back then. 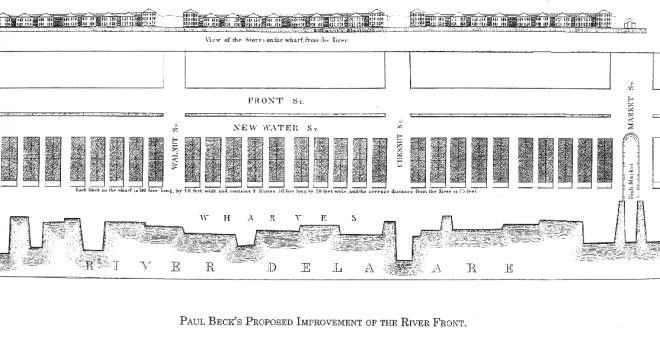 Part of Paul Beck’s diagram for his proposed revamping of the Delaware River waterfront. | Image from Philadelphia and Her Merchants: As Constituted Fifty and Seventy Years Ago by Abraham Ritter, 1860.

Remarkably similar, Girard and Beck were virtual waterfront successors to Benjamin Franklin and Philip Syng. Like Girard, Paul Beck was an importer and exporter, having acquired a fortune in the wine trade. Beck, like Girard, was a Port Warden of Philadelphia who was intimately familiar with the city waterfront. Beck’s “counting house” was at Front and Market Streets, and he owned storehouses along the Delaware River. And like Girard, Beck chose to live and work on Philadelphia’s riverfront despite its history of dirtiness and disease and despite being wealthy enough to live elsewhere.

Beck submitted his plan to Stephen Girard for his opinion, but Girard curiously opposed it. Yet it surely must have suggested to Girard that giving Philadelphia money to develop the Central Delaware frontage would help the city immensely.

Robert Morris (1734–1806) was an early merchant who prospered on the riverfront between Chestnut and Walnut Streets, where he came to own the India Wharf along this frontage. Morris is often called the “Financier of the American Revolution” for his financial dealings in support of the young nation during the Revolutionary War. His ships and those of other merchant financiers routinely left from the warf for India and China. Goods imported from those exotic places were stored and sold at Morris’ warehouse, called the Indian Stores, in front of the India Wharf.

In 1810, Quaker merchant Thomas Pym Cope (1768–1854) moved his fledgling shipping business to the Walnut Street Wharf (also called Cope’s Wharf). He had established a successful trade line between Philadelphia and Liverpool by 1822. Another early millionaire and philanthropist by the Delaware River, Cope was both a tough rival and a trusted friend of Stephen Girard.

In more recent times, Dutch immigrant Samuel Bookbinder opened an oyster saloon at 5th and South Streets in 1893 before moved his popular eatery to 121-135 Walnut Street. There he dished up all manner of seafood, getting his menu fresh off of ships docked on the waterfront. Shad, terrapin, and oysters were favorite meals, and portions were generous to satisfy a very masculine crowd including sailors and stevedores.

John Taxin built an empire out of an oyster saloon. The Original Bookbinder’s at 121–135 Walnut Street. | Photos: Harry Kyriakodis

John Taxin bought the place in 1945 and renamed it Old Original Bookbinder’s. During the restaurant’s heyday throughout the 1950s, 1960s, and 1970s, waiters scurried through paneled rooms adorned with ship models, stuffed game fish, and VIP photos. “Bookie’s” became a mecca for celebrities, tourists, and a regular crowd of Philadelphians. Personalities as diverse as Howard Cosell, Muhammad Ali, Elizabeth Taylor, Gregory Peck, John Wayne, and Frank Sinatra always visited Bookbinder’s whenever they were in town. The restaurant owner and his family, meanwhile, made a fortune. The restaurant closed in 2009 after the former owners declared bankruptcy and the building sat dormant. In 2015 Chef Jose Garces reopened the Old Original Bookbinder’s at Second and Walnut Street under the new moniker The Olde Bar.

Taxin was not the only purveyor of food to grow rich on the waterfront. The Penn’s View Hotel, on Front Street on the south side of Church Street, was built as a shipping warehouse in 1828. It became a hardware store around the turn of the 20th century and then a coffeehouse in the 1950s. The building sat vacant until chef Carlo C. Sena bought and refurbished it as a boutique hotel in 1989. The Penn’s View Hotel is home to Ristorante Panorama, an eatery serving fine Italian cuisine. Wine lovers around the globe have heard about its cruvinet, the world’s largest wine preservation and dispensing system.

Sena had previously opened La Famiglia Ristorante at 8 South Front Street in 1976. This was a daring undertaking since Old City had not yet become a dining destination. The restaurateur arrived in Philadelphia as an Italian immigrant only nine years before. Sena made his fortune only a few doors away from where French émigré Stephen Girard had found his.

If the current building boom continues at a steady clip, the Central Delaware waterfront will surely regain its status as a millionaire district. Luxury high-rises like One Water Street continue to materialize as reinvestment on the river gains momentum. These new apartments and condominiums exemplify the renewed allure of the Philadelphia waterfront and its future as a real estate hotspot.