Saving A Facade Is Not Historic Preservation 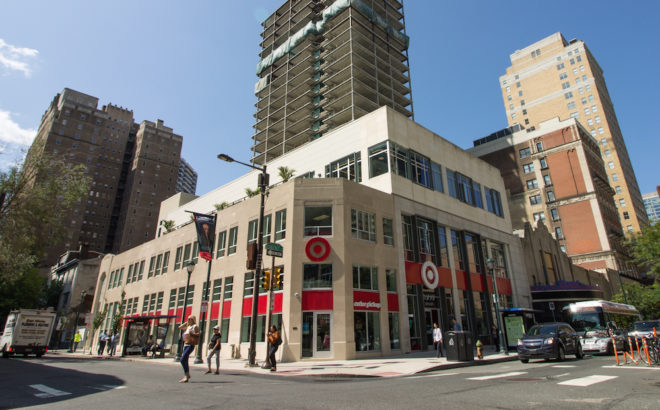 The utilitarian, but elegant Art Deco facade of 1900 Chestnut was retained and a new Target store was inserted behind it, part of the same mixed-use residential project as The Boyd. The building was constructed in 1935 for Raymond Pace Alexander, one of the city’s earliest African American lawyers. The building was listed on the Philadelphia Register of Historic Places for its aesthetic contribution to the streetscape. | Photo: Michael Bixler

Facadism may occasionally work as an urban design tactic, but, please, do not call it preservation.

Last week PlanPhilly published an article that brought up the topic of facadism, that is, the practice of retaining only the facade (or facades) of a building, while demolishing the majority of it, in order to construct a new, often larger structure behind it.

The piece touched on a few of the issues surrounding facadism, namely, why there are relatively few examples in Philadelphia compared to Washington D.C. and some of the costs and complexities involved from a developer’s standpoint. It also classified the practice as a form of historic preservation. However, most preservationists will vehemently argue that it is not.

Although the practice of facadism it is not typically embraced by the majority of those in the preservation community, it has a few outspoken advocates in Philadelphia. PlanPhilly interviewed Oscar Beisert, a local preservation superhero who has also lived in D.C. Beisert has accepted facadism as a last-ditch effort to retain any last trace of historic fabric in Philadelphia, a city that has become decidedly dismissive and unfriendly to preserving its historic assets. Also noted by PlanPhilly is the recent public calls to save facades in Philadelphia, namely by the Preservation Alliance of Greater Philadelphia in the case of Jewelers Row. The potential to reach a compromise through facadectomies has put the practice on the table here, so to speak.

There are a few examples of facadism in Philly, some more successful than others, spanning the past few decades. Fortunately, we’ve yet to see the tactic deployed as a workaround to avoid the limitations of historic designation to the magnitude that it has been in other cities, although some are certainly trying, as evinced in the cases of the Royal Theater and the Blue Horizon. 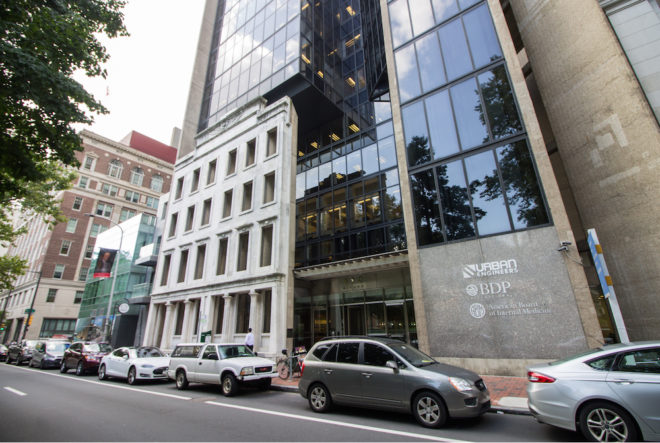 Mitchell/Giurgola Architects incorporated the facade of the Pennsylvania Fire Insurance Company building, built in 1838 and designed by John Haviland, when designing Penn Mutual Tower at 510 Walnut Street. The tower, completed in 1975, is one of Philadelphia’s earliest examples of facadism and is frequently cited as a good example because of the way the design both starkly contrasts with the existing facade while incorporating it into the new design as a screen. | Photo: Michael Bixler

Façadism was widely employed in the 1980s, most famously in Washington D.C., but also in other cities like New York and San Francisco. The practice began as a slippery preservation compromise due to emerging and evolving preservation legislation. Notably, they are on the decline in D.C. where regulatory language has been adjusted to discourage blatant facadism.

According to DC Historic Preservation Subject Matter Summaries, accessible through the Georgetown Law Library collections, preservation law in the Capitol has matured and no longer favors facadism:

When confronted with this argument, facadism proponents will likely reply, “Isn’t saving something better than saving nothing at all?” And the preservationists’ answer? Maybe in some cases, but it entirely depends.

When discussing facadism, definitions are important as the practice falls along a spectrum of adaptive reuse that ranges from rehabilitation of a historic building–carefully restoring a structure, although maybe for a different use than it was originally built for–to complete demolition, perhaps with the reuse of some historic materials or components.

The general consensus among preservation and design professionals is that a project constitutes facadism or a facadectomy when the majority of the building, including structural components, is demolished leaving only the remaining street-facing facade, or facades. (It is notable that nearly half the preservationists interviewed for this article used the less-polite industry term “facadomy” when discussing the issue.) 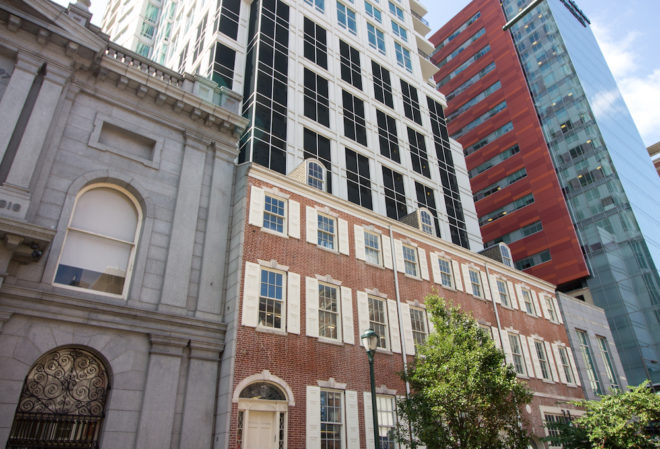 The distinction between facadism and other adaptive reuse tactics that incorporate new construction is an important one. Examples include gut renovations, where nearly all of the interior of a building is demolished and new interiors and systems are built within an existing envelope as well as overbuilds, where new construction is built on top of an existing building, incorporating an existing structural system or bypassing it.

Gut renovations, like the Lit Brothers project, which was identified as a facadectomy in the PlanPhilly article, are far preferable to facadectomies as they retain the entire envelope, massing, and, most often than not, structural system of an existing building. In some cases the interior may be drastically rebuilt, but new construction is more or less constrained to an existing four walls. That is a far cry from the variety of facadectomies that preserve mere inches of a building, which is the approach developer Ori Feibush is taking with the Royal Theater. 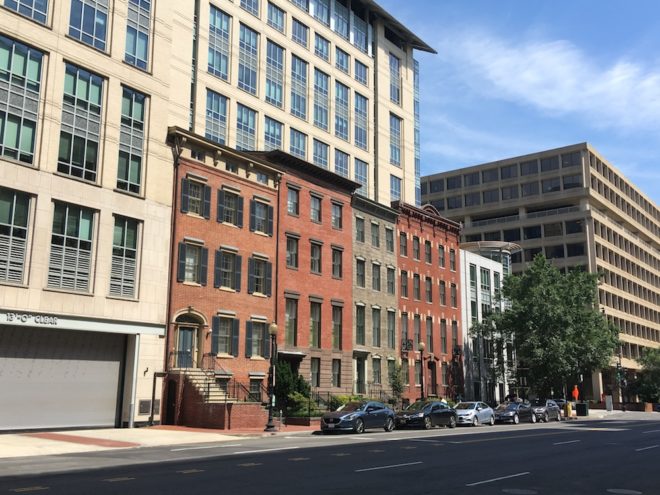 It is true that facadism really offers none of the environmental, social, economic, and historical benefits of actual preservation. In the worst cases, it strips buildings of their contents and context leaving them accessories to new development and throws away valuable embodied energy in the process. At facadism’s best, it retains the veneer of historic materiality or gives the illusion of a varied streetscape.

Local preservationist and architect Amy Lambert feels that facadism fetishizes appearances and materials over social and environmental context i.e. retaining the thing, or the appearance of the thing, without retaining the actual experience of it. “I have tried hard to see them as an attempt to have new development co-exist with buildings from the past,” Lambert said, “but I can’t. They represent the lie that we can have it all.”

Facadism can, perhaps, be evaluated slightly more favorably from a design standpoint, free from the constraints of worrying about the impact on historical and social context. Kathy Dowdell, a preservation architect based in Philadelphia, suggests that the successes and failures of facadectomies need to be measured on a case-by-case basis. “Some work much better than others. It often comes down to the overall design of the project,” said Dowdell, noting that some facadectomies can be done quite sensitively, but that requiring adequate setbacks and steering clear of the four feet of brick approach make for more successful projects. 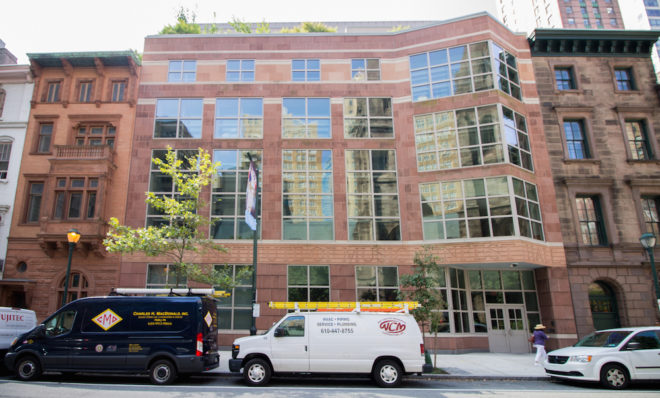 The Curtis Institute of Music’s Lenfest Hall on the 1600 block of Locust was designed by VSBA Architects. The new portion of the design reflects the intimate and historic character of the streetscape by utilizing brown sandstone, compatible scale with a generous setback, and incorporates the facades of two historic townhomes on either side. | Photo: Michael Bixler

Dowdell said she is willing to consider cases on the merit of their design, but was still clear about where she stands on the issue from a preservation perspective. “Facadism is not preservation. It’s just not. It can be a tool, in the toolbox, but not until we’ve explored other options,” she explained, referring to policy fixes like Transfer of Development Rights, or TDR’s.

From an engineering standpoint, the feasibility of accommodating any particular facadectomy depends on the scale and construction of the existing building or buildings involved. Since the practice essentially requires eliminating the structural components of a building, it requires expensive bracing throughout the demolition and construction process in addition to consultation by engineers.

Justin M. Spivey, a structural engineer and senior associate in the Center City office of Wiss, Janney, Elstner Associates, explained some of the logistics of facadism. According to Spivey, the viability of the “facade-only” approach depends on nature and construction of the existing buildings and presents unique challenges depending on the scale of the facade(s) to be retained.

In cases where a number of smaller parcels and buildings are assembled, similar to that seen on Jewelers Row, Spivey pointed out that challenges working with the variety of existing structures can lead to higher costs and limited options. Spacing between existing bearing walls, differing floor levels between buildings, and structural systems that don’t support new uses are all issues that may arise. 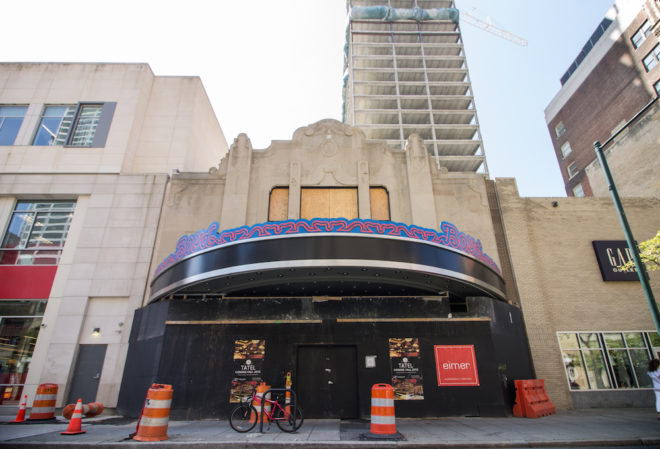 After a long back-and-forth, the lobby of the Boyd Theater will be retained in the new condo project, but essentially constitutes a facadectomy. | Photo: Michael Bixler

Larger buildings are not necessarily easier and may pose greater and different challenges. “The challenges of temporarily supporting a historic facade and reattaching it to new structure and the risk that it may be damaged or destroyed in the process are all greater at larger scales,” said Spivey. He also noted that the reuse potential of existing structural systems is better in large buildings, making them better suited to adaptive reuse, rather than facadectomies.

Spivey said that a huge amount of a building’s history is lost when the physical evidence destroyed during the facadectomy process, referring not only to architectural or social history, but the history of building technology. He pointed out that current preservation regulations place an undue emphasis on the exterior of buildings with little to no protection for interiors and “typically do not consider the cultural value of buildings as a physical record of technological innovation.”

In most cases, facadism is not a cost-effective process compared to other methods of adaptive reuse. Yet, when policy, permissible zoning, and high land values converge, it becomes a more viable option. This is precisely why we have seen so few in Philadelphia to date, but that doesn’t mean we won’t see more in the future.

Inga Saffron, architectural critic for the Philadelphia Inquirer, has written about a number of facadectomies in Philly, and not too kindly, calling them “demolition by another name.” She pegs the uptick in this trend as the result of an unwillingness by the Historical Commission to respect the designation process and stick firmly to subsequent regulations in the face of greedy developers.

It’s worth noting that the technique seems to be adapting to today’s political climate, with recent examples in the city like The Boyd and The Royal projects (and the suggestion of Jewelers Row, for that matter) following the model to save a sliver of the front and maximize condominium space in the back.

Ori Feibush’s mixed use project at the location of the former Royal Theater, which was an historic African American venue, employs the 4” of brick approach to facadism. The Preservation Alliance for Greater Philadelphia holds a façade easement on the property. | Rendering: JKRP Architects

Even if facadectomies remain, for the most part, prohibitively expensive here, conflating facadism with preservation may have unfortunate, unintended consequences down the line. It is this continual lowering of the bar that concerns preservation advocates. To Aaron Wunsch, a local preservation advocate and a professor of historic preservation at the University of Pennsylvania, “Facadectomy is a last resort, a consolation prize of limited value.”

Although Wunsch recognizes the instinct to welcome them as better alternative to total demolition, he notes that that approach “stems from desperation” and could send us down a road where facadectomies can be pointed to as a viable solution that appeases preservationists and developers.

Dowdell echoed Wunsch’s sentiment. “The other problem with preservationists encouraging facadism, in any way, is that then, in the next conversation about the next building, it becomes the starting point, rather than the ending point.”