Op-Ed: Our History Compels Us: We Stand United For A Free Press 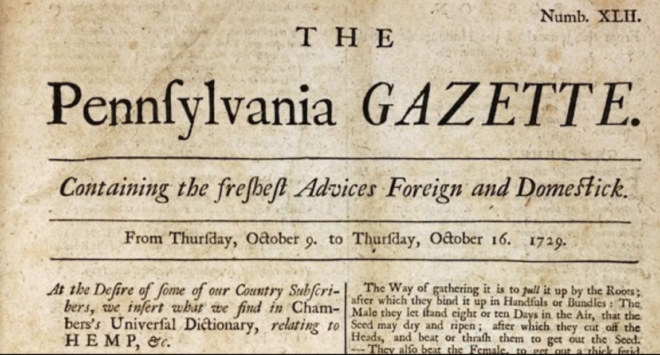 An early Pennsylvania Gazette. Almost immediately, its publisher, Benjamin Franklin, began publishing it more than once a week.

It was, almost 300 years ago, on these streets, in this city, that Americans first began publishing news more than once a week. The relentless free, open, and honest press was begun. We don’t think of the event as part of the hidden history of Philadelphia, but a matter of the utmost importance–one of the most powerful acts of a free, and eventually self-governing people.

And so it matters when the President, whose powers and limits were also enumerated and proven here, on these streets, decides to intimidate, threaten, bully, silence, and undermine that press. And we, in alliance with the Institute for Nonprofit News, of which we are a longstanding member, won’t stand for it. We are a small, and rather focused, news organization and yet we take our mission with the utmost seriousness–if we didn’t you, the reader, wouldn’t trust us.

We are honored to be part of the INN and to publish the organization’s pointed defense of the free press, written by its executive director and CEO Sue Cross, on our pages. (The INN is a network of more than 170 independent news media, all nonprofit, nonpartisan, and dedicated to strengthening the sources of trusted news for thousands of communities.)

Today, the Institute for Nonprofit News joins journalists across the country in asking you, the public, to stand up for your rights to free speech and an open government.

This started as a campaign by the Boston Globe to ask the President of the United States to knock off attacking the news media. But the President’s attacks on the press aren’t ultimately about the press.

“The press” is just journalists who work as your eyes and ears in places you can’t be. The press is the people you send into rooms to witness what your government is doing and tell you about it.

Dictators and tyrants don’t want you in the room. Dictators throughout the course of history have tried to limit what their people know or create confusion about what is true. By sowing confusion or getting you to limit your information sources, dictators reap power and control.

In the U.S., we are not a dictatorship. We are a democracy. A free, fact-based press was built right into the foundations of that when the First Amendment was adopted in 1791:

“Congress shall make no law respecting an establishment of religion, or prohibiting the free exercise thereof; or abridging the freedom of speech, or of the press; or the right of the people peaceably to assemble, and to petition the Government for a redress of grievances.”

Today, verbal and even physical attacks on media, police-state tactics and government secrecy are spreading with impunity throughout the country. In Denver and Milwaukee, police recently detained and harrassed nonprofit reporters and prevented them from doing their jobs. In Wausau, Wisconsin, officials routinely keep public documents out of the public’s hands–your hands. The same happens in East Lansing, San Diego, Oregon — and on and on. We hear reports month in month out, from the 170 nonprofit news media that are part of INN.

Attacks on nonprofit media are particularly cannibalistic. Nonprofit newsrooms are dedicated to public service. Their reporters and editors are public servants, with a mindset cops might find surprisingly close to their own. “Protect and serve” pretty well describes the motivations of most watchdog reporters.

It’s important to know that these attacks aren’t just launched against a national press, a liberal or conservative press, a commercial press.

They are against anyone who works to bring you fair, fact-based, objective accounts so that you have reliable information and can act on your constitutional rights–so that you can voice your stories, cast your votes, be informed, live freely and well.

Criticism of media is fine, and needed. But it’s different when government officials systematically tear down the free press because they don’t like the facts it reports. Then they are working to limit your ability to know what your government is doing.

Thirteen years after we adopted the First Amendment, Thomas Jefferson wrote to John Tyler, “No experiment can be more interesting than that we are now trying, and which we trust will end in establishing the fact, that man may be governed by reason and truth. Our first object should therefore be, to leave open to him all the avenues to truth. The most effectual hitherto found, is the freedom of the press. It is, therefore, the first shut up by those who fear the investigation of their actions.”

We’re not going to shut up. We’re going to keep reporting so that you can read what you want, make your own judgments, and question a government that works for you. That’s the basis of our freedom, our economy, our way of life.

So don’t be faked out by claims of fake news. It’s out there, no doubt. But so are many more reliable news sources dedicated to reason and truth. Dozens of public service newsrooms that commit to high ethical standards are listed in the INN member directory. Or commit to your local newspaper, radio newscast, television broadcaster. If you think an outlet’s coverage is off-base, reach out and question it, contribute news and commentary, point out a mistake when they make one. Reporters and editors want to hear from you.

The “news media” isn’t some monolithic thing. It’s a voice of your community, and you can be part of it. We hope you will. Because a free press doesn’t belong to the President. It belongs to you.