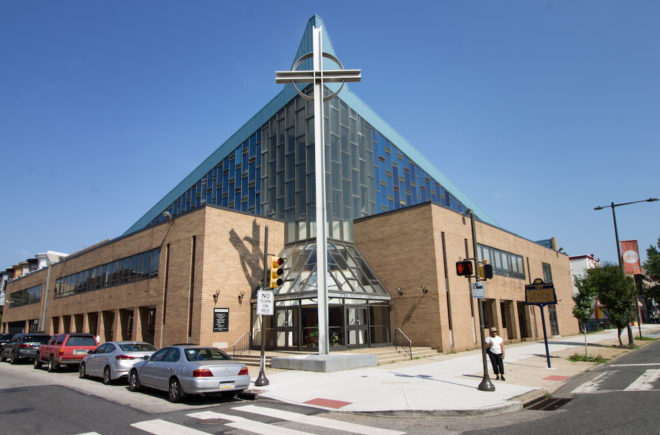 Zion Baptist Church at 3600 N. Broad Street was founded in 1882 and led by African American leader Reverend Leon H. Sullivan from 1950 to 1988. The congregation has partnered with Infill Philadelphia: Sacred Places/Civic Spaces to find design solutions for a sustainable future. Their distinctive church at Broad and Erie was built in 1973 and designed by architecture firm Eshbach, Glass, Kale & Associates. | Photo: Michael Bixler

This Saturday, Philly Free Streets returns for its third year. This time participants are being encouraged to engage with the landmarks and civic institutions that line the North Broad Street corridor, from Broad and Erie to City Hall.

The event’s robust roster, which can be found here, aptly emphasizes Black history by including tours of the landmark Uptown Theater, jazz performances, and a self-led scavenger hunt titled “Railroad Ticket to Black History on North Broad.”

The legacy of Reverend Leon H. Sullivan looms large over the event as the human services center named for him and the church he pastored from 1950 to 1988 both figure prominently in the programming. The sprawling lawn fronting the Leon H. Sullivan Human Services Center at Broad and Master will be transformed into a pop-up beach complete with 50 tons of sand, Adirondack chairs, and hammocks. And Zion Baptist Church, located just blocks from the Broad and Erie terminus, is opening its doors with a choir performance and arts activities like painting and nail art.

Zion Baptist Church began the late 1800s, but gained prominence under the pastorate of Rev. Sullivan during the mid-20th century. The congregation is working to reposition itself as an inclusive community hub and a place that helps transforms lives.

The vehicle for this change is Infill Philadelphia: Sacred Places/Civic Spaces. The project, funded by the William Penn Foundation, is an initiative led by the Community Design Collaborative and Partners for Sacred Places that adds the design community’s voice to a growing dialogue about the intersection between sacred places and community vitality by assembling working teams. Each of the three participating congregations are currently exploring programmatic possibilities by engaging with area stakeholders. Teams are composed of a congregation, a community group, and a design firm that, through an iterative design process, will envision a new future for the properties of participating congregations. With the initiative, in partnership with Called to Serve CDC and Studio 6mm, Zion Baptist Church is looking to its rich past to shape an unclear future.

Zion Baptist Church was founded in 1882 by Reverend Horace Wayland, a former slave born in Virginia. Between 1882 and 1950 the congregation moved from location to location as it incrementally grew in size and strength. The church was not well known prior to Rev. Sullivan’s 37-year pastorate that began in 1950. In 1955 he moved the church from 13th and Melon to the northwest corner of Broad and Venango into the former St. Paul’s Reformed Episcopal Church. In 1969 Rev. Sullivan purchased the former Trinity Reformed Church directly opposite of the main building.

Throughout the 1950s, 1960s and 1970s, the “Lion of Zion” developed an array of programs that would empower North Philadelphians to overcome racial and socioeconomic barriers. He founded Opportunities Industrialization Centers of America, which provided job training to African American youth and young adults, Zion Investment Association, which invested in start-up businesses helmed by African American entrepreneurs, and 10-36 Plan, a nonprofit cooperative and CDC that funded the construction of housing throughout North Philadelphia. Rev. Sullivan also spearheaded the construction of Progress Plaza, the nation’s first Black-owned (and developed) shopping center. During this period the congregation peaked at 6,000 members. 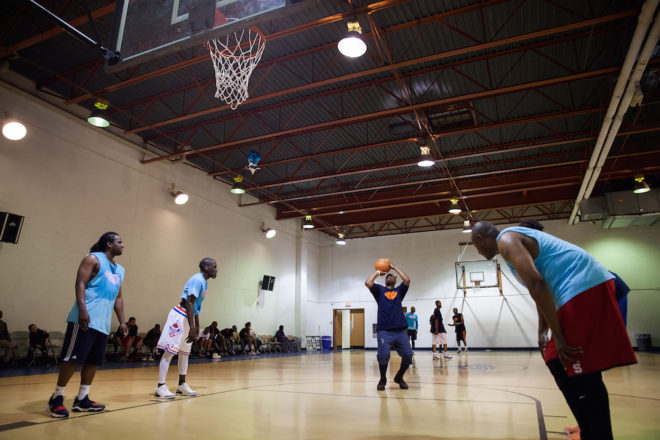 Church leaders and congregation members hope to reactivate their annex building into an energetic community hub like their gymnasium through design solutions and inclusive community engagement. | Photo: Chris Kendig

Today, Zion Baptist Church is a 400-member congregation that owns two large buildings, including the 1973 church erected under Rev. Sullivan, which replaced the former St. Paul’s Reformed Episcopal Church that was destroyed by fire in 1970, and the 1926 Zion Community Center–the former Trinity Reformed Church. The church, which includes a 1,500-seat sanctuary and a gym, is quite active. However, the community center or “annex,” which includes a sanctuary, fellowship hall, and classrooms, is completely unused.

The leadership of Zion Baptist Church hopes to tap into the energy associated with Broad and Erie revitalization efforts that have been gaining momentum since Shift Capital’s announced that it will redevelop the long-blighted Beury Building. They hope to reactivate the annex in a way that aids in reenergizing North Broad, while benefiting the Nicetown-Tioga community.

The choir of Zion Baptist Church will perform on the church’s front steps on Saturday, August 11 on the hour from 12:45 – 3PM as part of Philly Free Streets.

Disclaimer: Rachel Hildebrandt is the senior program manager of Partners for Sacred Places.