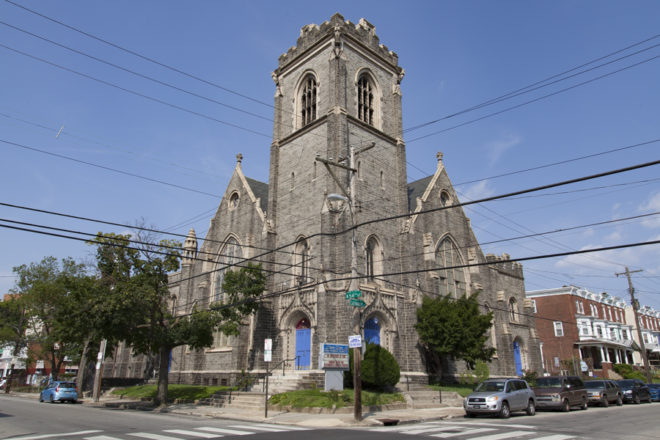 It has been just over three months since the kickoff of Infill Philadelphia: Sacred Places/Civic Spaces, an initiative led by the Community Design Collaborative (Collaborative) and Partners for Sacred Places (Partners) that launched in June.

The endeavor, funded by the William Penn Foundation, seeks to help local congregations “re-envision underutilized, purpose-built religious properties as community hubs” by pairing them with community partners and design teams that will work to creatively brainstorm ways to repurpose underutilized space in manners that engage the surrounding community.

Out of a pool of 16 applicants, three congregations were chosen: The Philadelphia Masjid at 4700 Wyalusing Avenue, Wharton-Wesley United Methodist Church at 5341 Catharine Street, and Zion Baptist Church at 3600/3601 North Broad Street. Each partnered with a local community group before submitting its application.

Once the three recipients were identified, Collaborative and Partners paired each with a top-notch design firm that will work to offer design solutions to realize the goals and needs identified by the congregations and the community.

At this point, each firm has completed an initial assessment of the varied resources at each site. Under the guidance of program managers Rachel Hildebrandt, a senior program manager with Partners (and longtime Hidden City Daily contributor), and Heidi Segall Levy, Director of Design Services with Collaborative, leadership at all three sites have begun gathering input from community stakeholders and their congregations that will inform the final project design. According to Hildebrandt, “The key is to determine the intersection of the community’s needs and preferences, the congregation’s ideas and priorities, and programming that is compatible with the buildings.” 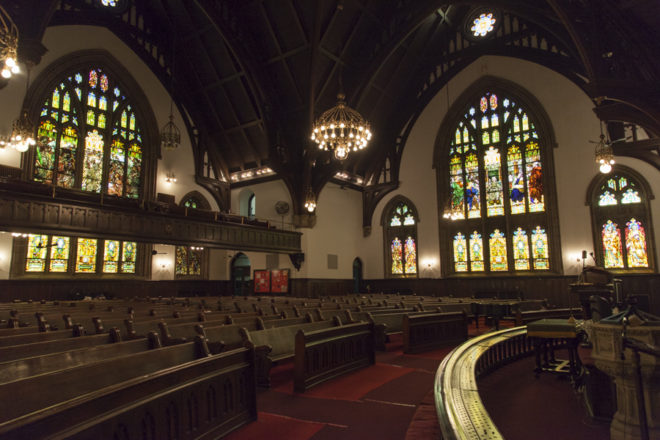 The main sanctuary at Wharton-Wesley United Methodist Church sports a spectacular timber vaulted ceiling. The space seats 600 and is rarely used by the current congregation. The team is exploring the possibility of transforming it into a performance space. | Photo: Starr Herr-Cardillo

The challenge and opportunity presented by Infill has been met with energy and enthusiasm. Engagement has been high and ideas plentiful. “The most challenging part of this whole thing,” says Hildebrandt, “is laying the groundwork for eventual implementation, but we’re doing our best to equip the congregations and their community partners to lay the groundwork while conceptualizing.”

The initiative intends to serve as a national model, but the prototype is ideally suited to Philadelphia. The sheer number of historic religious properties in the city is remarkable. However, as congregations have diminished over the past several decades, many religious groups are left with large, expensive-to-maintain properties, unable to maximize their use and potential. In many cases, congregations are left with no choice, but to cash in on their valuable real estate, leaving the buildings themselves to be converted to condos, or razed for new development, which leaves a void in the social fabric of the community.

Sacred Places/Civic Spaces meets this challenge head-on and responds by encouraging a more creative approach to repurposing and leveraging these resources by providing practical design assistance and engaging the larger community.

As Partners is quick to point out, places of worship nearly always fill social needs far beyond their congregations. Services from daycare, soup kitchens and food banks, after school programs, and assistance for the homeless and elderly are often offered through churches and places of worship. In that sense, putting the focus back on community engagement isn’t such a new idea, but the approach is.

“I think it was the first time that we as a church had engaged the community in such an intentional way,” said Reverend David Brown of Wharton Wesley in West Philadelphia. “For us, it was a great way to make that happen. And I think everybody also felt a sense of ownership. Like, when they were talking about what Wharton Wesley as a church could be, it wasn’t like, ‘this is what you guys should do,’ it was kind of like, ‘this is what we should do, this is what we need.’” 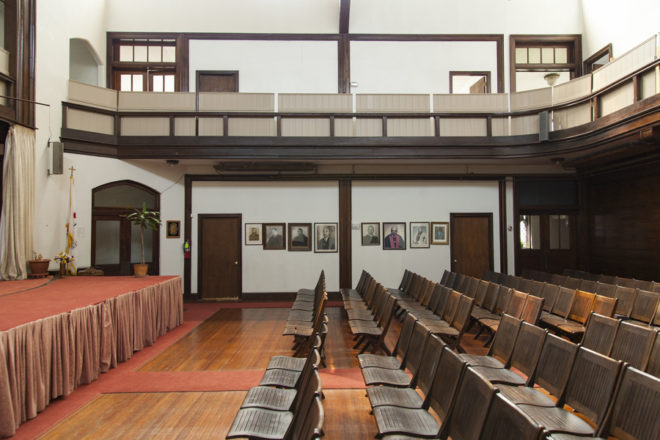 The current congregation of Wharton-Wesley, a group of about 100 holds services in this smaller space in an addition to the rear of the church. | Photo: Starr Herr-Cardillo

Brown appreciates that the process encourages the church to “reach outside its walls” and get more familiar with the surrounding neighborhood. “A lot of us have walked the neighborhood and just found stuff that we didn’t know existed before.”

Brown grew up in West Philadelphia, but now lives in New Jersey. The majority of the congregation lives outside of the area, often driving in for service and returning home afterwards, and it can feel like a little bit of an insular community, he says. “Now, you know, we’re going over to Booker’s for brunch after church or we’re over to the Gold Standard,” referring to local restaurants on Baltimore Avenue, “[They’re] things that have been here, but we didn’t know it.”

While each faith organization is working with a distinct set of resources, there are a number of common features, shared by nearly all religious buildings: an abundance of space, classrooms and teaching facilities, performance spaces, and large, industrial grade kitchens. All very helpful assets when it comes to serving local communities.

“The planning process has just been tremendous,” says Aazim Muhammad, of the Philadelphia Masjid which is housed in a sturdy four-story school building on the corner of 47th Street and Wyalusing Avenue. The Masjid has already gathered feedback from congregants who were asked to fill out a detailed survey and from the wider community through a task force meeting held at the end of July.

The mosque’s prayer hall, or musalla, occupies the former gymnasium on the first floor. Some offices and gathering space are set up in the basement, but for the time being, the remaining floors of the nearly 40,000 square foot building are unused. According to Muhammad, assessments by engineers have found that the property is in excellent structural condition, making it ripe with potential for adaptive reuse. 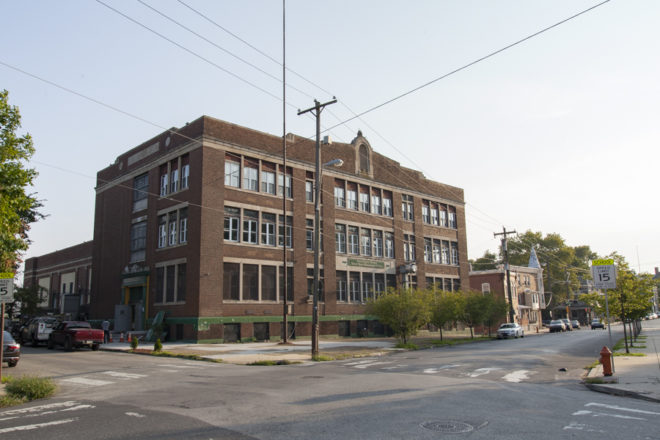 Formerly St. Thomas More Catholic High School, the building that is now home to the Philadelphia Masjid continued to function as a school until about 10 years ago. The organization has nearly 40,000 square feet of space to work with, most of it light-filled, generous-sized classrooms with good bones. | Photos: Starr Herr-Cardillo

“We realize that we are not going to go back to a traditional school,” says Muhammad, “but then we realized that there’s a tremendous void in the area of the building trades.” He says the vision taking shape based on feedback thus far involves offering educational opportunities for young people interested in the building trades using a “youth build” and workforce training approach.

With an additional large vacant lot at the rear of the property, the Masjid is also looking into possibilities for new development that would include housing. Offering support to at-risk youth and supplying multi-generational housing are also ideas on the table. Muhammad describes the ultimate goal to create a “complementary community,” a place “where folks can learn from each other.”

At Zion Baptist Church in North Philadelphia, Reverend Mike Major, President of Called to Serve Community Development Corporation, explained how Infill dovetails in with existing community revitalization efforts around Broad & Erie. Zion Baptist owns two large church buildings located across from one another at the intersection of Broad and Venango Streets.

Although the church has a robust congregation of about 400, the annex building—an old stone church built in 1911—has sat vacant since 2014. Major, who became aware of the Infill project through his work with the corridor revitalization project, jumped at the opportunity to reactivate the annex, which used to house numerous community outreach operations run by the church.

Zion Baptist’s annex building, an old stone church built in 1911, sits directly across Broad Street from the church’s current building. The annex was in use until 2014 and contains a large, open sanctuary space and three floors of classrooms. | Photos: Starr Herr-Cardillo

Major has a deep personal history with the neighborhood and the church. He grew up just blocks away and benefitted from various tutoring and college prep programs offered at the annex by Reverend Leon Sullivan, who pastored the church from 1950 to 1988 and was devoted to empowering youth in North Philadelphia.

Design efforts will be focused on the annex and will tap into its history of being a hub for community outreach programs, says Major. “One of the architects was really captured by the idea that a lot of us, myself included, have a rich history with the annex.”

The space, approximately 27,000 square feet, is in excellent structural condition and includes a large, open sanctuary and an adjacent wing containing three stories of classrooms.

Ultimately, Sacred Spaces/Civic Places is about restoring a sense of community vitality and helping places of worship realize their potential to serve as assets to a broader community. As Reverend Brown puts it, “I really don’t care who shows up on Sunday.” Laughing, he conceded that, okay, sure he does, but continued, “That’s not the measurement of vitality for a church. It’s one measurement, but if that’s the only measurement, you’re never going to do anything.”

In the coming months the design teams will work with their congregations to shape the final designs for each site. The firms will present a mid-review for site representatives in October and final designs will be presented to the public on December 4.