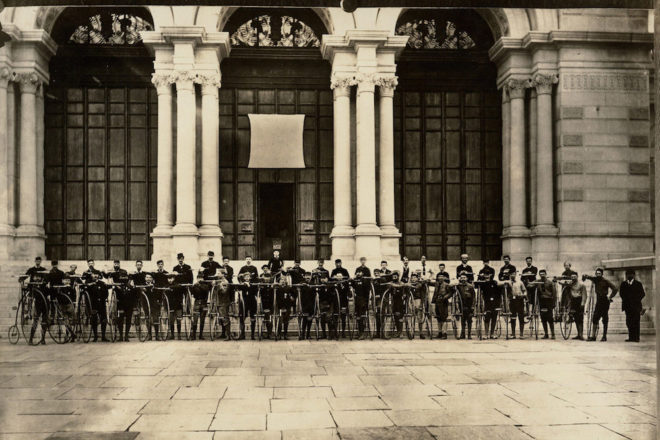 Cyclists line up in front of Memorial Hall before a ride through Fairmount Park in 1885. | Image courtesy of Historical Society of Pennsylvania

Philadelphia has been a cycling city since the advent of bicycles. The League of American Wheelmen, a national cycling organization, met in Philadelphia in 1897 with 45,000 cyclists in attendance. Bicycles, for those who could afford them or could borrow one, provided the freedom of independent movement that had been reserved for those wealthy enough to keep horses in the city, and allowed for casual interactions between men and women. Those in the know could travel to the scenic out-of-the-way spots, as cyclist Alphonse Estoclet wrote of an area near the Fairmount Water Works. “Take your kodak to this little oasis and you will bring home souvenirs that not one in one hundred Philadelphians will be able to locate (Route 16).”

Cycling was immensely popular in the 1890’s, and Estoclet produced what seems to be a unique set of American narrative bike routes published in the Philadelphia Inquirer. The detailed routes and hand-drawn maps described and showed crossroads, geographic features, and towns in the surrounding area, as well as local gossip. This allowed readers and riders to follow along. The routes ran regularly from 1896 to 1898 as a column called “Trips Awheel: Where to Go and How to Get There,” and then as part of a special travel insert, The Inquirer Roadster, sporadically for another few years. The routes for 1897 through 1898 have been transcribed and digitized by faculty and staff of Paul Robeson Library, Rutgers Camden, and are now available online.

The route narratives are searchable pdfs, and an image of the map and the coupon (where applicable) are included. At present, the routes are listed in the order they were published, with the capability to search the text of all of them at once forthcoming. A list of published routes for 1896-1897 is provided. A list of later routes is in process.

Similar, but shorter routes were published in Britain’s Manchester Guardian and compiled into a book in 1896 titled, Road and Lane: A Handbook for Manchester Cyclists & Tourists by Haydon Perry. The League of American Wheelmen publication Outing also included some routes. A Cyclers’ and Drivers’ Best Routes In and Around Philadelphia by Frank Taylor was published in 1896 and included short, one paragraph route descriptions. A search of currently available online American newspaper databases retrieves announcements of races or group rides, but the Inquirer series was far more detailed than those short notes. 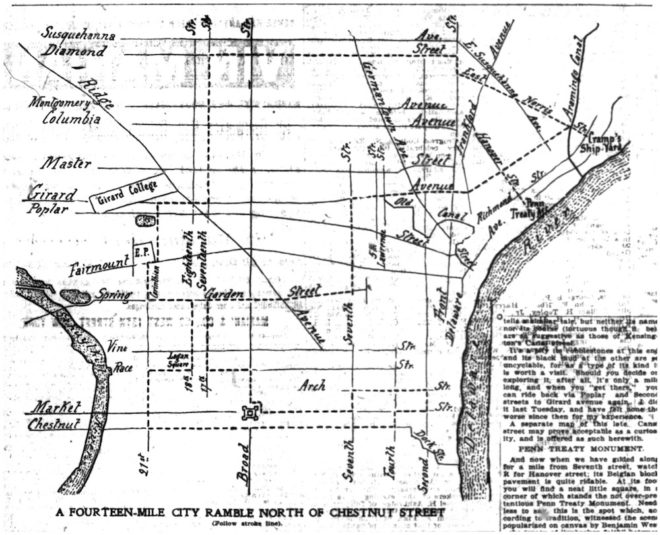 The routes themselves read much as modern travel blogs do, with reference to historical, cultural, culinary, and financial aspects of the area. Some rides are short and sweet. For instance, Routes 29, 43, and 46 just go up or down a specific street. In his tour of Germantown (Route 29) Estoclet mentions house numbers and talks about distinctive door knobs. The occupants of these houses may have complained as later street specific routes focused on non-residential buildings. Others string together to form a route from Philadelphia to Pittsburgh (Routes 30, 31, 32, 33, and 34), and Philadelphia to New York (Routes 1, 3, and 9). Of the trip to Pittsburgh, Estoclet noted that he rode for pleasure not speed, and riders accompanying him should expect to cover 46 miles per day and complete the trip in eight days with the trip home by train.

Most are day trips or afternoon rides to locales in an around Philadelphia, from whence most of them start. A few are maps and descriptions of the major cyclable roads in specific parts of Philadelphia and one for Camden. There is also a map and list of 100 cycle clubs located in the city (Route 46), most of them having clubhouses–which is a lot of real estate to be devoted to one sport. Most of the Philadelphia-based travel routes begin at City Hall, which was then called “the Public Buildings.” About a third focus on roads in New Jersey, and one goes down into Maryland, described as home of the overpriced breakfast.

Another unique aspect of the routes is that many included a route coupon, showing road conditions, and a list of hotels along the way, with a note that hotel restaurants would provide a discount to anyone who presented it. This is a very early example of a travel coupon.

Estoclet, an editor at the Philadelphia Inquirer, was born in France, moved to Ireland, and then England. He immigrated to the United States around 1890 as a widower with two teenage sons. They settled in the Philadelphia area, and all three became very involved with the local bicycle life. Oldest son Joseph held office in the Quaker City Wheelmen and was frequently a rider or a judge in local bike “runs” and races. The younger son, Alphonse David, was also a bike enthusiast. Whether the boys picked it up from their father or their father took it up to spend time with his sons is unknown, but the initial routes in 1896 were signed A. Estoclet, later shortened to just A.E. The routes are written in the voice of an older man, and the younger Alphonse was away serving in the Spanish American War when some of the routes were published, so it is certainly the father not the son who wrote them. Estoclet remarried and had a third son around the time the routes were being published. 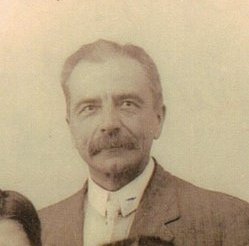 Estoclet was a renaissance man. He had in-depth knowledge of history and language, but could also discuss scientific and political matters. Not surprisingly, he taught French and was an original translator of some of Jules Verne’s books into English. He was a man of strong opinions and one of the stronger of these was his general dislike (perhaps hated) of tolls. One example of his distain is noted in Route 42. “We shall not find the pike at the present date in as good a condition as we did last May (although we shall be charged exactly the same amount of toll).” Estoclet was a frugal man, or perhaps simply one who had to live within a budget. This was sometimes expressed in an outrage over the cost of meals. He was particularly incensed over what he thought was an overpriced breakfast in Route 26 in Conowingo, Maryland.

Estoclet’s love of his adopted country (although there is conflicting evidence on whether he ever became a U.S. citizen) is rampant, especially where the Revolutionary War and events in early American history are concerned. Perhaps because it was still relatively recent, he made few references to the Civil War. Although he had not been in the country long, Estoclet was well-versed in U.S. history and frequently made reference to historical events or people associated with the places he rode past. He would include snippets of songs, tell stories, and point out interesting details, as well as give road conditions, whether the roads were made of stone, gravel, dirt, or the red clay he disliked so much. He would point out places to get a good meal at a good price, sometimes at hotels or inns, sometimes simply at farmhouses along the way that would sell dinner to a passing cyclist.

Philadelphia has an inferiority complex. This is hardly new. Estoclet makes several references to the stereotype of Philadelphia as old and slow. He takes pains on some routes to point out where the city was an early adaptor, when things originated here, or the city was in the vanguard on issues or technologies. He also comments on civic matters. When writing about the local open markets he mentions the concerns about them being pushed out by factories, much as we worry over the loss of manufacturing.

Since automobiles were just being introduced the routes he takes would only be shared with pedestrians, individuals on horseback, or carriages. Many of the routes are now identifiable as highways. And, going backwards, also easily mirror Native American trails, as shown by comparing them to Indian Paths of Pennsylvania by Paul A. W. Wallace. The map for the second route in the 1897-1898 series, from Bristol to Trenton, mirrors both the Falls Path and parts of I-95 and route 13. Some of the roads still have the same names. For example, East River Drive, Wissachickon Drive, Old York Pike (now Road), and White Horse Pike. What Estoclet calls the “Crookedest Thing That Ever Happened” (see Map 2, Route 43) is still there, although not as recognizable since other roads have grown up around it. The “crookedest thing” is a series of connected streets that followed the Old Cohocksink Creek that was later turned into a canal. Some of the buildings he references are still standing and tracing the routes on Google maps is an excellent way to track the modern view of areas he describes. 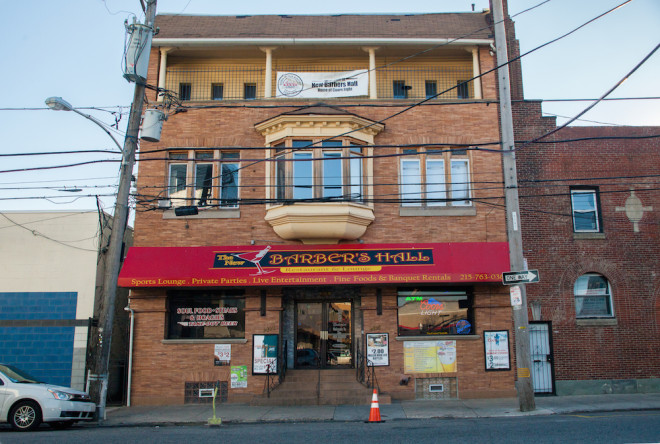 The New Barber’s Hall at 1402 West Oxford Street was the former headquarters of Quaker City Wheelmen bicycle club. Established in 1890, it is one of the best examples of late 19th century bicycle clubhouses in the city still standing. | Photo: Michael Bixler

Estoclet was known to have a deep interest in and knowledge of the origins of words and the names of places, demonstrated by his contributions to literary journals like Notes and Queries and his involvement with the Encyclopaedic Dictionary. He frequently comments on this as he rides by locales. He notes in Route 43, “Isn’t it funny that we should be made to call ‘Master’ street, a street that was christened after Thomas ‘Masters,’ the Mayor of this city in 1707; even as municipal wisdom insists on our calling ‘Woodland’ Avenue a thoroughfare that leads to ‘Woodlands’ Cemetery and cuts through the ‘Woodlands’ estate? Funny, indeed, painfully funny!

Here is another note, this time from Route 42, ‘Tacony’ is Indian, of course; at least it is the modern adaption of an Indian name which I have seen spelled ‘Tawocawomink’ in ancient records, and which is supposed to mean ‘uncleared forest; ‘Wingohocking’, on the contrary, is said to signify ‘place for planting.’

Road conditions were important for cyclists. Estoclet will point out which routes are most accessible and which are not. He says this about Nicetown Lane in Route 1, Anyhow, the present appellation of the lane only impressed its wretchedness the more forcibly upon us, and it was an immense relief to us to see it being piked in 1894.”

“Sidepaths,” which were a cross between what we would consider bike paths and sidewalks are another concern. Estoclet and his fellow cyclists are all for them and he often points out their presence or absence in the routes. Estoclet notes if the locals viewed cyclists positively or not, including the residents of Andalusia (Route 1) that he said left tacks on the road to sabotage bikes.

Philadelphia has been a bicycle town for a long time. Alphonse Estoclet’s route narratives are an expression of that, and his words form a literary snapshot. They are like long lost letters to the city and the region, describing the places you could reach on two wheels.

Julie Still Julie Still is a librarian at Rutgers University in Camden, NJ, where she works with the History, Political Science, and World Languages departments, and coordinates the library’s Special Collections area. The bike routes project has been a labor of love and she is delighted to see it completed and ready to share. Although not currently a cyclist herself she has fond childhood memories of riding on the back of her brother’s bike while eating moon pies.