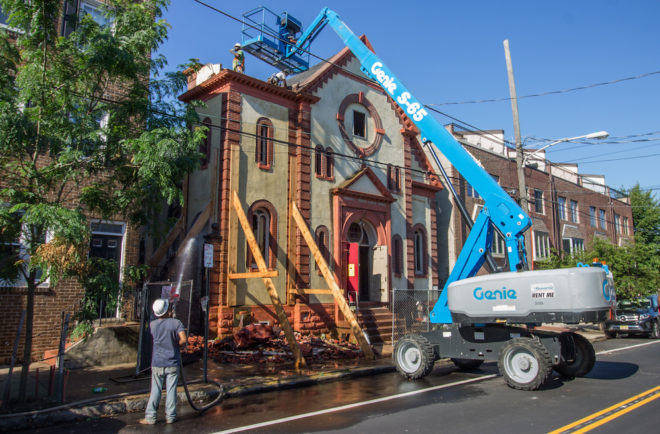 Down comes Christian Street Baptist Church in Bella Vista. Despite public demonstrations, a plea for Mayor Jim Kenney to intervene, and an offer to buy and reuse the building, the Italian Market landmark is currently being demolished by Ori Feibush, owner of OCF Realty, for an empty lot. 1020 Christian Street was built in 1890 for the congregation of the Protestant Episcopal Italian Mission & Church of L’Emmanuello and is a reminder of the wave of Italian immigration in South Philadelphia during the late 19th and early 20th centuries. After being placed on the Philadelphia Register of Historic Places for legal protection last November, the decision was overturned by the City citing a misreading of procedures by the Historical Commission. | Photo: Michael Bixler

The pace of real estate development and demolition has reached a fever pitch in Philadelphia and so has the stakes for saving history. In response, RePoint Philadelphia, the city’s first historic preservation-focused political action committee, was recently founded to counter a city at odds with preserving its culture and architectural character. The group formed out of discussions between Aaron Wunsch, architectural historian and professor of historic preservation at the University of Pennsylvania, Janice Woodcock, former director of the Philadelphia Planning Commission, and former Mayor John Street surrounding the preservation of historic churches in the city. What became immediately clear from these conversations was a political void for preservation advocates in Philadelphia.

While historic preservation is inherently political, most involved do not participate in this particular aspect of the field. Organizations like the Preservation Alliance for Greater Philadelphia base much of their work in advocacy, but what distinguishes RePoint is their ability to engage in direct political action like fundraising and lobbying, something nonprofits are legally prohibited from doing. In this capacity, RePoint is free to directly address the growing political and economic pressures that have been overwhelming the preservation community and leading to significant losses over the past decade. While the political climate surrounding preservation is often hamstrung by deep pockets and Sisyphean and in nature, members of RePoint appear optimistic about their ability to effect change.

One of the key issues on the top of many historic preservationist’s lists is Philadelphia’s 10-year tax abatement for new construction. This single piece of legislation is often cited by City officials and real estate developers as the catalyst for the recent construction boom. According to a recent study from the Office of the City Controller, since the tax abatement was enacted in 2000 the city has seen an net increase of almost 15,000 new properties, which is roughly 7.5 times what was projected in 2002.

Wunsch believes that this has lead to an unfair influence of redevelopment over historic preservation and community interests. “There’s a pervasive sense that developers are the goose that lays the golden egg,” he said, pointing out that developer’s interests are often protected in order to maintain a stable economy. 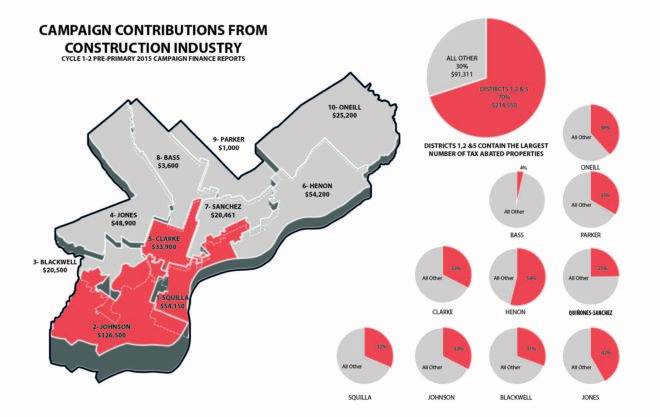 The Building Industry Association has consistently lobbied in favor of keeping the tax abatement because of its economic impact. However, critics like Reclaim Philadelphia and RePoint believe that the tax abatement unfairly benefits wealthy investors with market rate new construction projects, which comes at the expense of long time homeowners and existing historic assets. According to the City Controller’s study, 67.3% of current abatements are new construction, and properties over $1 million in value hold the lion’s share of the total abated revenue. In the case of improvement projects, because the abatement is only applicable to the value of alterations made to a property, constructing an entirely new building is always going to yield a greater tax benefit than a rehabilitation or reuse project. This fact puts preservation projects at a disadvantage since there are no additional financial incentives for reuse at the local level.

Perceptual influence also translates to real financial influence as well. During the 2015 municipal election, individuals and businesses associated with the construction industry contributed roughly 32% of the donations made to City Council campaigns, a figure that translates to around $305,861. Of this amount, $214,550 was contributed to Districts 1,2, and 5 where 79% of actively tax-abated properties are located. While Wunsch acknowledged that RePoint may not be able to raise this level of funds, he does anticipate entering the political fray. “If it gets us a toe in the door, I think we can actually make a compelling public interest argument that developers can’t,” he said. To this end, Wunsch is generally optimistic about RePoint’s potential to influence policy makers in favor of historic preservation.

At present, the effect of real estate developers on policy is often played out in heated Philadelphia Historical Commission meetings. Preservationists generally do not have much background in politics or preservation law and must compete with developers, and their legal team, who have direct financial interest in the outcomes of these meetings. This dynamic, paired with the current pace of demolition, has exposed inherent weaknesses within the City’s current preservation policies and developers are becoming more adept at exploiting it. Preservation advocates tend to get stuck on case study examples like Jewelers Row and Frankford Chocolate Factory said Wunsch, but what is really needed is an evaluation of the aggregate effect of all of these instances.

Since 2008, the number of demolition permits issued in Philadelphia have increased dramatically from 750 to 1,277 in 2016. And while the rate of properties being added to the local register has also increased–nine in 2008 to 31 in 2016–Philadelphia still lags behind its peer cities. According to the National Trust for Historic Preservation, only 4% of buildings in the city have been evaluated and only 2.2% have been locally designated despite having a significant amount of buildings constructed before 1945–approximately 68% of the city’s total building stock. 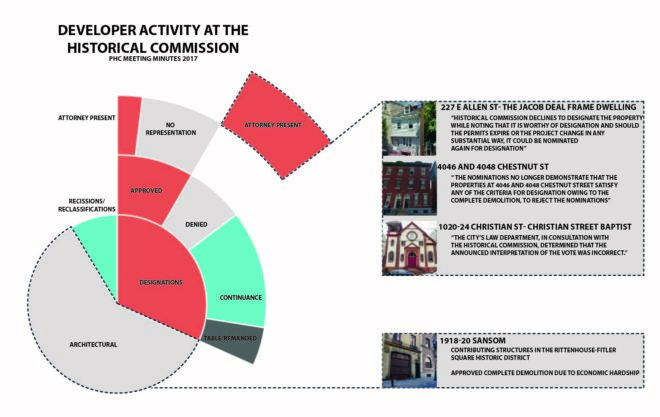 At the same time, developers are getting more tactical in their approach to preservation cases. While the Historical Commission does not publish annual reports of the organization’s activities, some information can be extracted from their monthly meeting minutes. In 2017, developers had projects before the Historical Commission totaling 47 times, excluding the consent agenda and instances where no action was taken. The vast majority of these were an architectural modification, addition, or infill construction. Most were small changes or effecting non-contributing structures to historic districts. However, there was one instance, the Oliver H. Bair Funeral Home at 1918-20 Sansom Street, where a complete demolition was allowed to occur due to economic hardship.

Yet, historic designations are a bit more contentious. In this category, there were 15 instances of developer-owned properties in 2017 that went before the full Historical Commission, several of which were repeats of the same properties as appeals for continuances were made. Of these, there where four properties that were listed (and one designation that was later deemed “invalid” by the City) and three applications that were denied. While three of the four properties that were added to the register received no opposition from the owners, Christian Street Baptist Church at 1020-24 Christian Street was vigorously contested by owner and developer Ori Feibush with support from a team of attorney’s, hired engineering experts, and architects. Of the nominations that were denied, all property owners had legal representation and all were rejected by the Historical Commission because of technicalities. While there are other factors to consider when looking at this snapshot, it is evident that when a developer has a vested interest in not having a property listed on the local register, they often pull from every resource at their disposal to contest it. As a group mostly comprised of volunteers, nominators and preservation advocates generally do not have the money to pay for legal representation. But they do have the aid of architectural historians on their side. Yet many of these nominations were found to meet the criteria for designation, but were denied anyway. Wunsch and RePoint believes that the Historical Commission does not stand up for historic preservation in these legal cases and instead allows the buildings to be demolished.

Members of RePoint suggest that there is a “culture of fear” that is spreading between historic preservationists and neighborhood groups, perpetuated by so called strategic lawsuits against public participation (SLAPP) that have resulted in higher premiums for registered community organizations (RCO) that review zoning proposals. This trend has seen the demise of a number of RCO’s and has created so much legal havoc that the city is now considering legislation to provide financial support to these groups to offset the cost for their staff’s liability insurance. 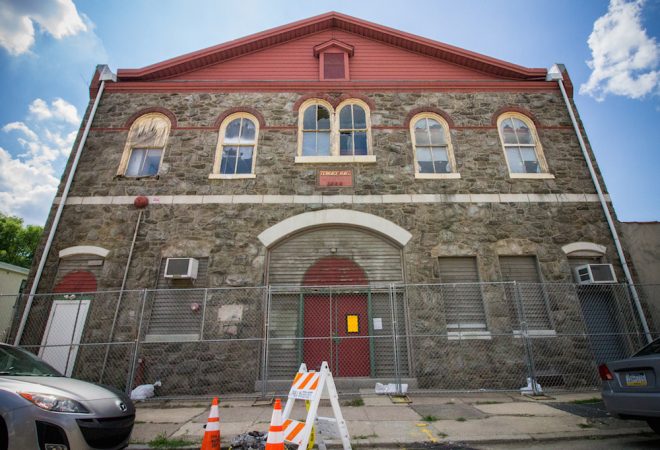 Terrace Hall, a former community hall, farmers market, and livery stable at 3818-32 Terrace Street, was built in 1888. The Wissahickon neighborhood landmark was most recently been used for arts and crafts studio space serving a woodworking shop, a ceramic studio, a glass blowing company, and an antique piano restoration business. In 2016, all tenants were evicted and the old meeting hall was demolished for 15 new town homes. | Photo: Michael Bixler

In order to combat this alleged culture of fear, RePoint aims to invest in direct political action to support preservation at all levels. “Without political will to change, things will stay the same,” said Wunsch. For RePoint, this means financial contributions to political candidates that they endorse, direct advocacy for policies that promote preservation, and public protest and demonstrations. Some policy changes that RePoint would like to see are adjusting the 10-year tax abatement, providing financial incentives for adaptive reuse projects, and demolition review.

RePoint believes that these issues are not exclusive to the preservation community, but also to neighborhood and urban advocacy groups around issues like affordable housing, improved living conditions, and building vacancy. In addition to one-off preservation battles, Wunsch noted that these same development forces are affecting homeowners at the block level, creating an “everyday sense of erosion” as unprotected properties are removed either by new construction or demolition by neglect. RePoint aims to exploit these areas of overlap with other movements and organizations to create an urban advocacy coalition.

One of the preservation PAC’s main goals is to go beyond City Hall and out into communities to garner support. “We want everybody involved,” said Katie Dillon Low, a local artist and member of RePoint. “Most people don’t know what preservation is because it is completely inaccessible to them.” Low believes that through outreach efforts the organization can dispel common myths about historic preservation like elitism and reduced property values and make the case for it as a valuable community tool. To this end, RePoint wants to shift the perception of preservation in thinking beyond the material artifact, set academia and exclusion aside, and consider the real social and economic circumstances that are, brick-by-brick, dismantling the history and culture of Philadelphia’s neighborhoods.