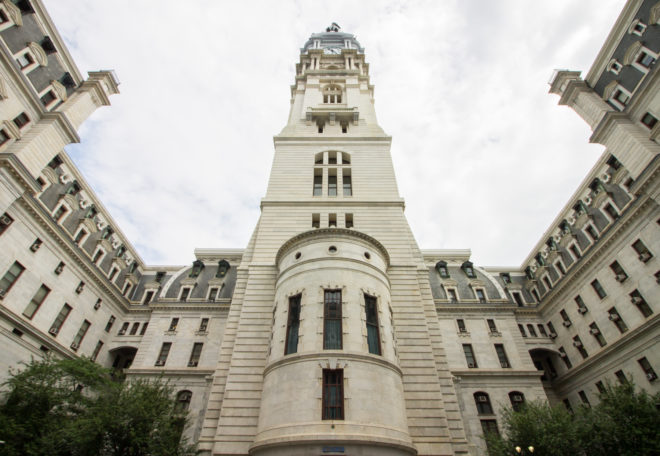 Still keeping our options open? City Hall was added to the National Register of Historic Places in 1976. It is currently not listed for legal protection on the City’s own Philadelphia Register of Historic Places. In the 1950s plans were floated to demolish City Hall, the architectural heart of Center City, keeping only the tower and the statue of William Penn. Overwhelming logistics, a $25 million price tag, and a shift in negative popular opinion following the restoration of Conservation Hall in 1982 thwarted the idea thankfully. | Photo: Michael Bixler

Mayor Jim Kenney’s Historic Preservation Task Force held their next to last “On the Road” meeting on Thursday, July 19 at 1515 Arch Street. The main item on the agenda was reviewing a draft of their “Challenges and Best Practices Matrix,” a document created by the body based on input from the National Trust and findings of its own subcommittees. The meeting also included updates from subcommittees and a public comment period.

As the Task Force enters its final phase, members of the public are anxiously looking towards implementation of new policies and proactive controls. According to Chair Harris Steinberg, the group is now pivoting from examining best practices in peer cities towards making specific recommendations for Philadelphia. It was clear at Thursday’s meeting that those who have been patiently following along are hoping for a call to action that they can get behind.

“We’ve all been through a lot of really valuable task forces where the recommendations are fantastic, the work done is excellent, and it sits on a shelf,” said Kathy Dowdell, who works as a historic preservation architect at Farragut Street Architects.

During the public comment section, Dowdell urged members to provide direct ways for the public to get involved at the final public input meeting that will be held September 20. “Print up a sheet with the Mayor’s phone number, every City Councilperson’s phone number,” she continued. “Having real, concrete and simple ways for the public to help with implementation would be very valuable.” Dowdell’s suggestion was met with nods of approval from members.

The Task Force will gather once more in its entirety outside of their subcommittees in a closed meeting in August before September’s public meeting to hash out some of the specifics of recommendations identified by subcommittees. September’s meeting will follow the participatory format seen at previous public meetings like the one held at Independence Visitor Center last October, which drew more than 200 participants. Those unable to attend will be able to participate through the group’s website.

Task Force members were decidedly action-oriented throughout the meeting. As representatives from the five committees reported on their progress it was clear that considerable time and effort has been put forth working with research provided by the National Trust to review best practices and prioritizing solutions that are well-suited to Philadelphia.

Reports from the Regulation, Survey, Incentives, and Education and Outreach subcommittees mostly took the form of bullet point updates. The groups are still working through the nitty-gritty of their respective issues and appeared to be looking forward to pinning down some concrete recommendations. Much of the discussion prompted by subcommittee reports pointed to a need for better integration and assessment of existing materials, data, and resources within City agencies and other local organizations.

Nan Gutterman, speaking on behalf of the survey subcommittee, remarked that the group had consulted with leaders of the Survey LA initiative in Los Angeles—a massive undertaking by the city to conduct a comprehensive survey its historic resources. “The City needs to do a comprehensive survey” said Gutterman. “It’s not a suggestion, not really an option.”

Steinberg emphasized that the meeting marked a shift in the group’s focus—away from review and towards recommendations that are “actionable items.” However, he noted the potential to get bogged down by complexities surrounding implementation and reminded the room that sorting out the specifics of how to move from recommendations to actual policy doesn’t fall within the Task Force’s purview.

During the public comment period participants were eager to get into the details. Juanda Myles, a citizen planner, suggested that the Education and Outreach Committee consider recommending the creation of a “Citizen Historical Preservation Institute” similar to the Philadelphia Citizens Planning Institute. The goal, according to Myles, should be to train the general public in preservation-related skills that would help them recognize and advocate for significant buildings in their communities.

Addressing what he referred to as the elephant in the room, Paul Steinke, executive director of the Preservation Alliance for Greater Philadelphia, asked that the Task Force consider the impact of the 10-year tax abatement for new construction on historic resources in the city, particularly regarding properties listed on the National Register of Historic Places.

Steinberg concurred that the abatement is part of a legacy of “unintended consequences” from the 1990s and early 2000s “when the city was so desperate for development.” Task force member Catherine Califano stated that the Incentives Committee has been examining the issue.

In the end, the Mayor’s Historic Preservation Task Force has control over the framing and recognition of preservation-related issues that it chooses to address, but, contrary to public perception, it does not not have any actual authority over regulatory change. Most of the recommendations put forth by the Task Force will only be accomplished through legislative action, requiring follow-up and political will. It will ultimately be up to an informed public to keep up the pressure on Mayor Kenney and City Council.