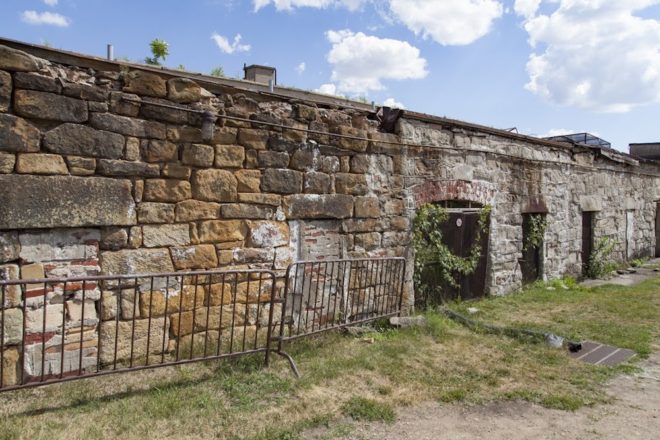 Centuries of pollution, treatments, bio growth and exposure have left the stone walls at Eastern State in a “stressed” state. Remnants of incompatible white washing, applied in the 1920s, are visible on this exterior wall. The site contains miles of walls in need of cyclical maintenance, including repointing and stabilization. | Photo: Starr Herr-Cardillo

Eastern State Penitentiary encompasses an entire city block and sits preserved as a “stabilized ruin” in the heart of Philadelphia’s Fairmount neighborhood. The castle-like campus is recognized as the first “true” penitentiary and was built in the 1820’s by architect John Haviland based on the Quaker ideals of penitence and isolated incarceration. ESP served as an operational prison up until its closure in 1970 and sat mostly vacant for a decade before it was purchased by the City of Philadelphia in 1980. In 1998, Eastern State Penitentiary Historic Site, Inc., a nonprofit organization, was formed to preserve and operate the penitentiary as an historic site. Today, the penitentiary is one of Philadelphia’s best-known historic sites, drawing more than 250,000 visitors per year.

Maintaining a nearly 200-year-old prison in an arrested state of decay is no easy feat. Decades of abandonment and ruin have left portions of the site vulnerable to damage from the elements. While the organization has systematically stabilized and opened up new wings of the prison to the public, the never-ending task of cyclical maintenance remains. For that, management has been working with the National Trust’s HOPE Crew to look towards a potential new model that engages a local workforce.

“The stone’s been stressed out,” says Sally Elk, President and CEO of Eastern State Penitentiary, gesturing to the towering stone walls around her. Elk, citing coal pollution and water damage from leaky roofs and exposure as two major culprits, points to a low wall blotched with patches of white. “There was a warden who had come from the Navy and he thought that everything should be white, so everything up eight feet was whitewashed.” This whitewashing project in the 1920’s was done with a mixture that included salt, also a serious stressor to stone. 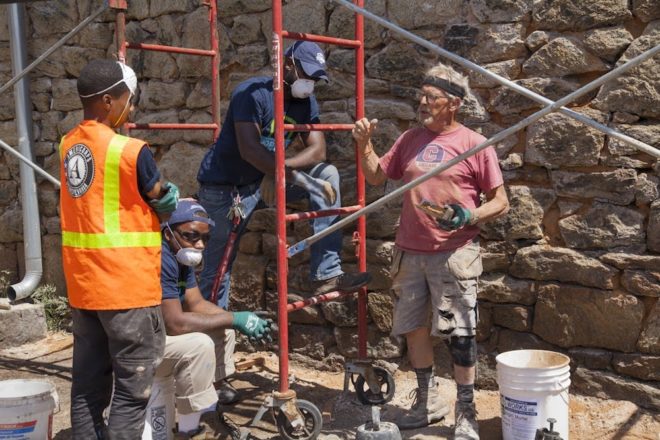 Elk was part of a group of architects, preservationists, and historians who recognized the site’s historical and educational value and banded together to lease the penitentiary from the City in the mid-1980s. Amid a call for proposals to demolish the penitentiary and redevelop the property, the group was able to convince City leaders that it should be stabilized and preserved. Elk has, more or less, been running things ever since.

“One of the biggest challenges is that it’s hard to fund things like masonry repair, masonry conservation, and roofing repairs,” Elk says, which is why ESP has been running pilot restoration masonry training programs this year. “We’re thinking that if we can partner with others and offer these training opportunities, the result is that we get the work done, we get it done to our specifications, and it should be a win-win for everybody.”

A two-time alumna of University of Pennsylvania’s Historic Preservation program, Elk graduated a member of the second class and attended again ten years later after the program had added its conservation curriculum. She has worked with interns from the program over the years. The repointing of the walls surrounding the exercise yard at ESP was all done by preservation students.

Elk has long been aware that the site lends itself to this sort of specialized restoration masonry training, but said it can be difficult to get a program like this going. Fortunately, Elizabeth Trumbull, the new Manager of Historic Preservation and Architectural Conservation at ESP, has taken over organizing masonry training workshops. 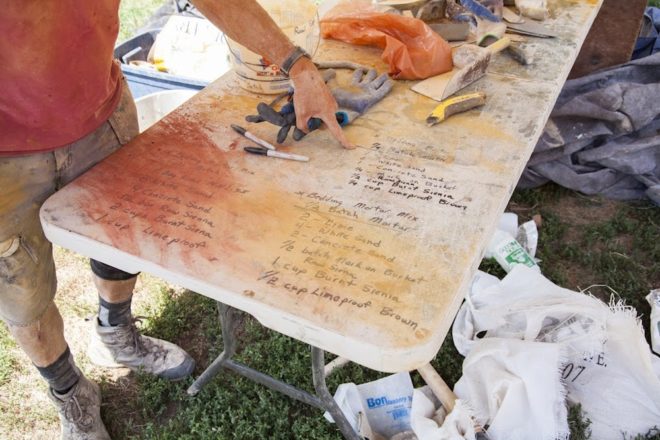 Gibney points to the winning mortar recipe on the prep table. It includes a mixture of two types of sand, hydraulic lime, and a color tint to match the historic clay-lime mortar. | Photo: Starr Herr-Cardillo

The penitentiary hosted its first workshop last spring. Students from Williamson College of the Trades, a three-year trade school for men located in Delaware County, worked for one week with masonry expert Roy Ingraffia from the International Masonry Institute. This month ESP is hosting a two week training workshop, organized in conjunction the National Trust’s HOPE Crew.

The crew is repointing the granite wall of Cellblock 3, the prison’s medical wing. They are working on the wall below the Solarium, which was added above the wing to provide a space for tuberculosis recovery. Over the years, the addition’s roof failed, allowing water to infiltrate the wall below, which ate away at the clay-lime mortar, leaving large empty cavities in the wall.

For now, Trumbull says, the goal is stabilization, not restoration. ESP’s ruinous state allows flexibility in their approach to conservation. With a new roof, gutters, and downspouts, and the threat of water infiltration reduced, the crew will carefully chip out the old mortar and replace it with new bedding mortar to stabilize the wall. Once the bedding mortar has been replaced, the walls are stable and more experienced masons can come in and finish with the more fastidious V-joint pointing to match the historic pointing at a later time.

HOPE Crew helps facilitate the workshop by identifying a local youth corps group, a local craft expert, and pairing them with an historic site, typically a National Park Service site. In this case, ESP approached HOPE Crew, who paired them with the local youth group PowerCorpsPHL, an AmeriCorps workforce development program for young adults. This is the first HOPE Crew project in Philadelphia to date.

“There is a need for more masons skilled in conservation and an opportunity to train young people at ESP to enter those career paths,” says Trumbull. “The way that masonry is being taught as a trade nowadays is largely new construction. Having these workshops opens up a whole new skillset.” 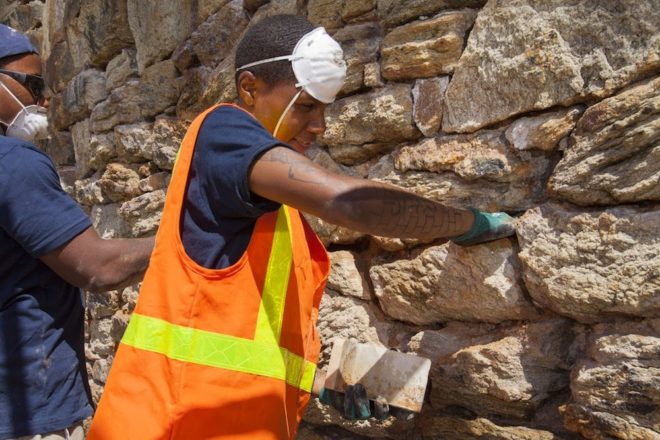 Typically, PowerCorpsPHL crews work with the City’s Department of Parks and Recreation and the Philadelphia Water Department doing green infrastructure landscape work, however the group was happy to venture into masonry repair. Crew members participate in six month long “cohorts.” They are provided a stipend with the opportunity to enter the workforce through apprenticeships and on-the-job training positions upon completion of the program.

“It’s a little bit familiar, but I’m definitely learning a lot,” says crew leader Brian Johnson, who has some personal masonry experience. Johnson started with a PowerCorpsPHL cohort in 2015 and has since spent two years as a crew leader.

For most of the younger crew members, working on masonry is a new experience. “It’s fun and a good experience,” said Keyana Lane, a team member in his second cohort. “You’ve got to pay attention to the details.”

The crew will wrap up their project on Friday, July 27. Trumbull looks forward to developing the program further. “Eastern State is a huge site. It’s preserved in a state of ruin. We have miles and miles of repointing to do.”