Two PA Historical Markers At A Loss In South Philly 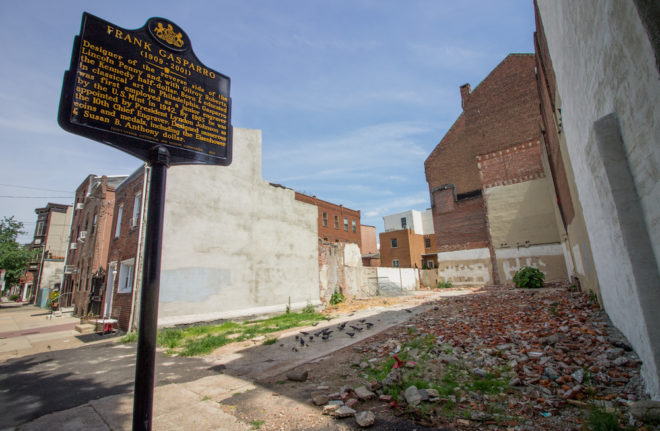 The former home of U.S. Mint Chief Engraver Frank Gasparro and an adjoining property were demolished last summer. The lots have sat empty for over a year. | Photo: Michael Bixler

Pennsylvania historical markers are meaningful reminders that provide passerby with little clips of cultural context often lost to collective memory. One of the best examples is the marker in front of the old Douglass Hotel at 1409 Lombard Street where legendary jazz singer Billie Holiday often stayed. Equally illuminating and a hair off the beaten path is the one in front of world famous confectioner Milton S. Hershey’s first candy store at 935 Spring Garden Street. In both cases, the buildings that these plaques reference are still standing for onlookers to acknowledge and contemplate. But in rapidly redeveloping Bella Vista, a state marker in front of the former residence of U.S. Mint engraver Frank Gasparro narrates the history of an empty lot. Another marker commemorating the birthpace of beloved Italian-American tenor Mario Lanza will soon be homeless as it gives way to demolition for a proposed gated community.

There are 311 historical markers standing in Philadelphia today, the highest number in all 67 counties in the state. The program began in 1914 and has been administered by the Pennsylvania Historical and Museum Commission since it took over for the Pennsylvania Historical Commission in 1946. Any individual or organization can nominate a site for an historical marker. Once approved by the PHMC, the sponsor is required to pay a fee for production and installation–roughly $1,620 for city markers and $2,060 for roadside markers. Once the plaques are placed, their maintenance becomes the responsibility of the PHMC.

Some sites, like the marker at Belmont and Parkside Avenues honoring the Philadelphia Stars,  local African American baseball clubs, and the former location of the P.R.R. YMCA Athletic Field, were placed decades after historic baseball stadiums and culturally significant structures have been lost to time. Another example is the marker that was placed in 1999 to commemorate the mighty Broad Street Station that once filled the blocks surrounding 15th and Market Streets. The ornate Pennsylvania Railroad transportation hub, designed by Wilson Brothers & Company and expanded by architect Frank Furness, was demolished in 1953 for Penn Center as the city’s urban renewal era gained steam. 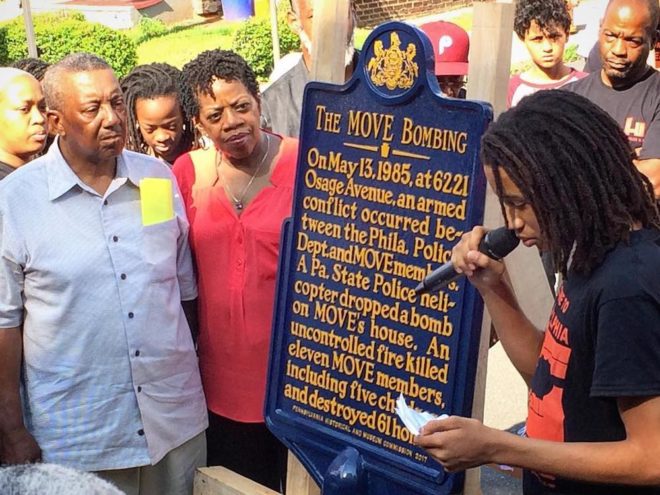 A Pennsylvania historical marker memorializing the MOVE bombing was unveiled on June 24, 2017. The plaque was nominated by students of Jubilee School after two semesters of immersive research. | Photo: Michael Bixler

Some markers are unintentionally temporary. In 2016, a state marker was nominated by the middle school students of Jubilee School in West Philadelphia to memorialize the 1985 MOVE bombing on Osage Avenue. The marker, unveiled in June 2017, was supposed to have been permanently placed next to Cobbs Creek Park near the homes that burned, but was postponed due to a dispute over paperwork between the sponsors, Councilwoman Jannie Blackwell, and the City.

But what happens when existing buildings with historical markers like the former homes of Mario Lanza and Frank Gasparro meet the wrecking ball? Apparently nothing at all. Much like the inclusion on the National Register of Historic Places, state markers provide zero legal protection to historic structures in Philadelphia. The City isn’t even required to inform the PHMC when a demolition permit is filed, nor does the agency require municipalities to alert them when those buildings are razed. “Markers are dedicated to honor people, places and events,” said Sean Adkins, Digital Director of the PHMC.  “The history of the subjects of the two historical markers in question, a significant musician and a significant artist, is unchanged by the demolition of the buildings where the markers are located.”

The historical marker commemorating Frank Gasparro at 727 Carpenter Street was sponsored by the Samuel S. Fleisher Art Memorial and dedicated in 2002. The Chief Engraver of the U.S. Mint from 1965 to 1981 designed both sides of the Susan B. Anthony and President Dwight Eisenhower dollar coins. He was also responsible for the Lincoln Memorial on pennies minted from 1959 to 2008 and the back of the Kennedy half dollar, placed in circulation in 1964 as a memorial to the president’s assassination. Gasparro passed away at aged 91 in 2001. Last summer his former home was razed. The historical marker out front now highlights the history of an empty lot.

Son of South Philly and singer/actor extraordinaire Mario Lanza made an indelible mark on his old neighborhood that real estate development is quickly erasing. Gone forever is the tenor’s chest-filled highs soaring up from the Singing Fountain on Passyunk Avenue on summer nights, a long-standing South Philly tradition that was replaced some 10 years ago by new residents on the avenue and commercial radio on the weekends. A mural dedicated to the Italian-American impresario stills stands at Broad and Reed. Yet, considering the increasing value of the parking lot next to it, the mural may not be around much longer. 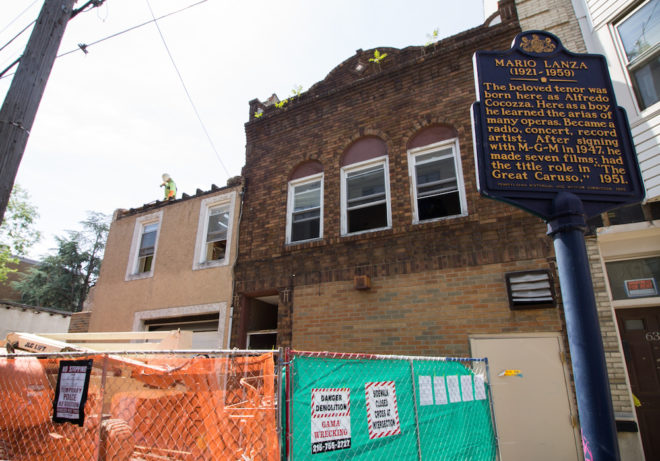 The birthplace of singer, actor, and South Philly native Marizo Lanza at 7th and Christian Streets is currently being demolished. | Photo: Michael Bixler

The marker in front of Lanza’s birthplace at 636 Christian Street was sponsored by the Mario Lanza Institute and dedicated in 1993. In April, owners of the home, the property next door, and the Banca Calabrese building on the corner, Christian Street Acquisition LLC, presented a proposal to neighbors at a zoning meeting that included plans for a gated community with two buildings, seven apartments, ten parking spaces, and a shared private driveway. The Bella Vista Neighbors Association opposed the developer’s plans in a letter to the ZBA, calling the height of the proposed buildings excessive and the potential adverse affects on current and future neighbors for not having open space within the design which, they maintained, created a “dead zone.” Along with concerns over the proposal, calls within Philly’s Italian-American community to preserve Lanza’s birthplace heightened, including Mayor Frank Rizzo’s former secretary, Jody Della Barba, who petitioned to save the home from demolition. Yet, as of this week, the tenor’s former home and the property next door is currently being razed. As for Lanza’s historical marker out front, it will make a bitter, ironic coupling with the condominiums that will soon rise from the rubble.