Taking History To The Streets With Preservation Activism 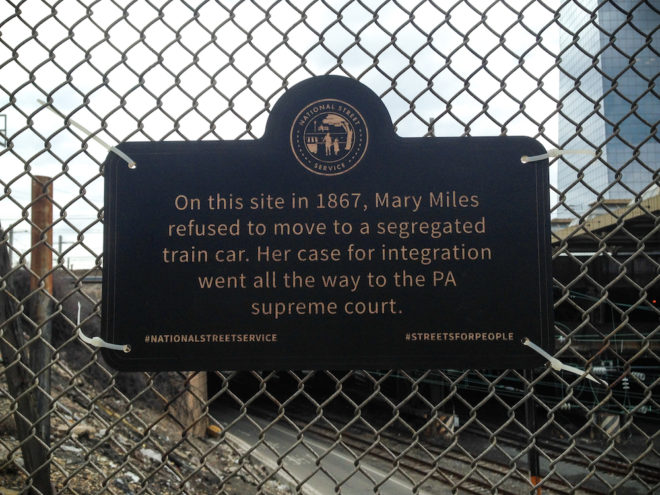 It’s not very easy to get municipal and state historical commissions to create new memorials and markers, especially monuments celebrating unsung African American freedom fighters. That is why, when I decided to make a historical marker, I didn’t ask for permission.

Late one night, as I was researching the history of my neighborhood, I discovered Mary Miles, a Black Philadelphian who, in 1867, refused to move to segregated train accommodations in the vicinity of what is now 30th Street Station.

She brought a case for integration all the way to the Pennsylvania Supreme Court. Although she lost her court battle, her action helped lay the groundwork for the growing civil rights struggle in Philadelphia. The trolleys integrated later that same year due to the activism of Black Philadelphians working through the legislature. One of these activists was Octavius Catto, who in September 2017, received a statue in his memory at City Hall, the first public statue dedicated to an individual African American in Philadelphia.

Miles herself was a remarkable woman. She was a schoolteacher who spent her life working towards Black equality. Shortly after her protest, she moved to the South to teach newly emancipated citizens. She was one of many African American women during the Reconstruction era who believed that education was a key part of the freedom struggle. And, like so many other likeminded women, her legacy has been largely forgotten. Her story is a powerful, yet hidden part of Philadelphia’s history.

I’m a public historian and an activist, which means that I care deeply about how our history is commemorated, and when I see something unjust, I don’t wait around to see what happens. I do something about it. It was a pretty easy decision to make a historical marker celebrating Mary Miles. 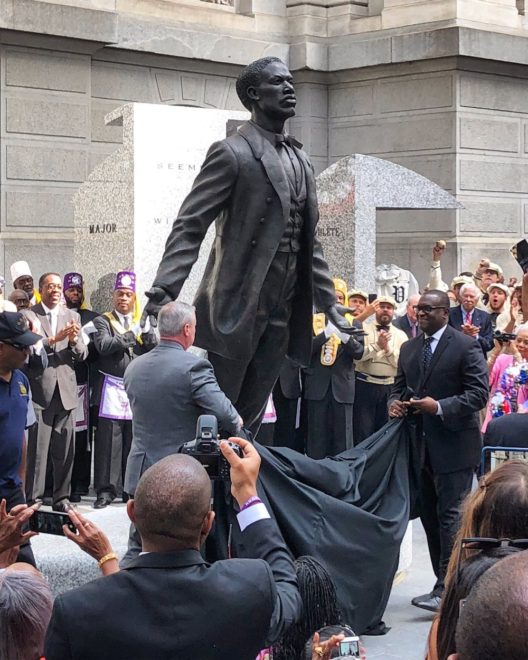 I’ve never made a historical marker before, but I was fortunate enough to have access to materials and basic training to learn professional fabrication techniques. Making use of the open hours at a West Philly makers’ space, I learned how to create a digital image of a marker, how to use a laser printer, and how to turn a simple piece of wood into an evocative story. All told, with help from graphic designers at the National Street Service and artists at Tiny-WPA, it took me less than one day to fabricate a brand new historical marker.

I put the sign in my backpack and biked over to 30th Street Station. I walked back and forth on JFK Boulevard between 30th and 32nd Streets before deciding on the perfect location for my marker: on a stretch of fence overlooking the train tracks that lead into the station. Trains, after all, are one of the primary subjects of this story, and I wanted visual unity between the surroundings and the marker itself. I pulled the sign out of my bag, along with some zip-ties, and attached the sign to the fence. Just like that, Mary Miles had a historical marker.

My decision to commemorate Mary Miles came at a moment when our country is reckoning with our history and coming to terms with the political significance of our public monuments. This debate is most well-known for the controversies around Confederate memorials, although the debate has also reached Philadelphia’s Frank Rizzo statue. Last month, New York City decided to remove its statue of J. Marion Sims, the so-called “father of gynecology” who conducted cruel experiments on enslaved women.

The conversation about Confederate landmarks opens up a conversation about what memorials are offensive, but the conversation should not end there. On the occasion of taking down local Confederate statues, New Orleans Mayor Mitch Landrieu discussed how the city had commemorated Confederate history and how it had (not) commemorated Black history: “Both stories were history. One story told. One story forgotten or maybe even purposefully ignored,” remarked Mayor Landrieu on the subject. Around the country we are reckoning with the reality of what stories are being told and taking down memorials to people who were clearly white supremacists. But we do not always do an adequate job of asking what stories have been forgotten and purposefully ignored.

Too often, the stories that are forgotten and ignored are those of freedom fighters. Philadelphia installed its first memorial to an African American individual, Octavius Catto in 2017. Let that sink in. We are a city renowned for our rich history. Tourists come from all over the world to visit our numerous historical museums and sites. We have over 1,700 monuments on public property, more than any other city in the nation. And only one of those monuments honors a Black individual. That absence is a choice about which history our city wants to share with the world, and the choice our City officials have made, historically, is the wrong one.

The lack of memorials to African American activists is no reflection on the significant role these individuals have had in our city’s history. Rather, it is a reflection on the failure of our city to tell its own history in its full richness, complexity, and reality.

The tide has started to turn in recent years, of course. In addition to the new Catto statue, the City installed a plaque commemorating the horrors of the slave trade in 2016 and a plaque commemorating the MOVE bombing in 2017. But, with approximately 1,700 memorials to non-Black figures and a glacial rate of change, it will be a long time before we see anything resembling parity in the official narrative.

Philadelphia’s streetcars desegregated because two Black men, Octavius Catto and William Still, pushed the legislature to change state law. Both of these men are finally being publicly remembered as the heroes they were–William Still’s house, which harbored hundreds of people on the Underground Railroad, was recently discovered, and was nominated for the Philadelphia Register of Historic Places in March 2018. William Still is often considered to be second only to Harriet Tubman in terms of the how many people he helped reach freedom. 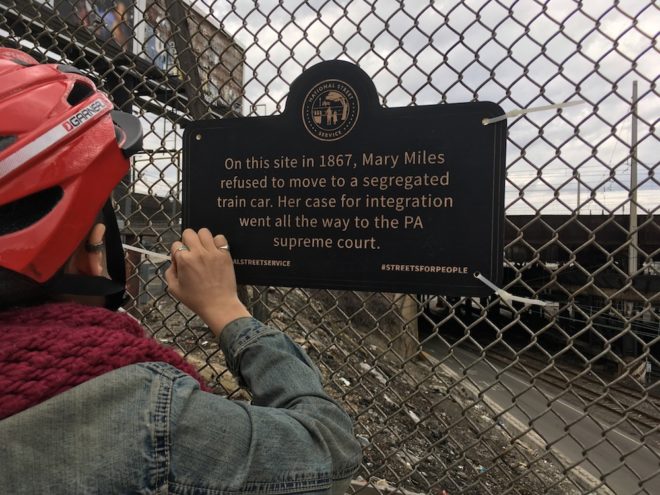 Catto was a Philadelphia teacher and activist. He was instrumental in supporting the Union during the Civil War, advocating for Black male suffrage and desegregating Philadelphia’s trolley cars. He was murdered in 1871 on Election Day, one year after African American voting rights in Philadelphia were restored, on his way to cast his ballot. Mourners traveled from around the country to attend his funeral.

Catto was one of many people in Philadelphia fighting for equality in the 1860s. Mary Miles and many women like her, including Catto’s fiancé, Catherine LeCount, fought to integrate the trolley system through direct action, refusing to move even when it meant being forcibly removed from these public accommodations. Together, these integrationists were part of the wave of Black civil rights activism that occurred in the immediate aftermath of the Civil War, 80 years before what we commonly call the modern Civil Rights Movement.

Philadelphia’s official desegregation narrative ends with Catto and Still, but the reason that these two men pushed for desegregation was in large part because of the many Black women who had been forcibly removed from Philadelphia’s streetcars in previous years. Around the country in the late 1800s through the 1920s there were many streetcar protests and boycotts led by African American women, because they were the primary users of the streetcars that depended on public transportation to get to their jobs. In Philadelphia, this happened in the 1860s, leading up to the 1867 integration law. Mary Miles was one of many women who refused to move, inspiring Catto and Still to fight for new laws. Yet the women who laid the groundwork for the integration campaign have been largely forgotten.

Catto and Still are undeniably civil rights forefathers, and their public commemoration is long overdue. But it is no coincidence that our public memory, on the rare occasions that we do make room for civil rights history, typically only makes room for men. Nowhere in Philadelphia is there a celebration of the working class Black women who fought for justice by putting their bodies on the line, refusing to move even in the face of violence. So often, civil rights progress came because visionary activists, such as Mary Miles, refused to follow unjust laws. Our stories about how change and progress occur need to include stories of direct action and civil disobedience. Much of our progress as a nation has been the direct result of brave citizens, often women, breaking the law.

Right now, there is little public celebration of people like Mary Miles who created the realities we now take for granted. Hopefully, as our national conversation about commemoration continues, that will start to change. May her marker soon be one of many celebrating the role of rebels in shaping the world we live in today.