Some Philadelphians were dismayed by the demolition of the Nabisco plant in Northeast Philadelphia last summer. The factory, on the west side of Roosevelt Boulevard at Byberry Road, was a fixture of that part of the city for decades. The landmark building towered above the surrounding area and filled the air with the delicious aroma of baking cookies. A retail mall and a Wawa fuel center will soon be built at this location. As sad as it is to contemplate this loss, one should also remember that another huge and famous baking company was not only once located in Philadelphia, but was actually founded and headquartered in this city. 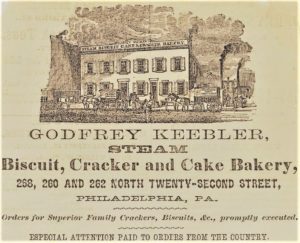 An engraving of the main building of Godfrey Keebler’s first bakery complex at 22nd and Vine Streets. | Image courtesy of Print and Picture Collection, Free Library of Philadelphia

German immigrant Godfrey Keebler arrived in the United States at age 10 with his parents and was soon employed at a mill near Phoenixville, Pennsylvania. When he was 19, Keebler came to Philadelphia to learn the trade of baking bread and cakes. Three years later, Keebler established a small bakery on Market Street above 13th Street and operated it until 1846. He then moved to Columbia, PA, but returned to the Philadelphia area in 1850 to live in Camden and to work as a foreman at a Philadelphia bread and biscuit bakery owned by John Rickets. Keebler moved from Camden to Philadelphia to live at 12th and Christian Streets in 1862, the same year he started renting a bakery, possibly the same one from Rickets’ estate, at 22nd and Vine Streets. The Vine Street Expressway runs through this site today.

Keebler came to own the property at 258 and 260 North 22nd Street, as well as 262 and 264 North 22nd Street and 2210 Vine Street. Among other baked goods, Keebler baked hardtack there. Hardtack was a nearly indestructible and barely edible bread for Northern forces during the Civil War. Keebler became very successful as a result of government contracts and was thus part of the new crowd of Philadelphia industrialists who made their fortune not from property or inheritance, but from “new money,” generated, in this case (and many others), from Civil War profits.

Around 1864, Keebler moved his residence from the Christian Street address to 2222 Brandywine Street, near the bake shop. Prosperous entrepreneurs typically lived north of Market Street and were disdained by older wealthy Philadelphians who lived around Rittenhouse Square and otherwise south of Market Street. Keebler later moved further north, first to 613 North 22nd Street and then to 643 North 22nd Street. All of his later residences were just a few blocks from his factory. This was typical of most Philadelphia industrialists in the late 1800s.

Between 1866 and 1872, Keebler erected a three-story building on 264 North 22nd Street and added an additional story onto 260, 262 and 258 North 22nd Streets. Keebler initially employed 45 or so workers–it could be said that he baked goods the old fashioned elfin way—the “Uncommonly Good” way.

This map from the 1922 Atlas of the City of Philadelphia shows the first Keebler factory in Philadelphia at 22nd and Vine Streets. A “steam bakery” takes its name from the method used to heat the oven.  | Image: Philageohistory.org

The bake shop contained a steam engine and three steam ovens. The term “steam oven” refers to the use of steel tubes containing water heated until steam is produced at the proper temperature for baking. The furnaces were constructed to economize fuel by consuming the gases they produced. Many ingenious machines to knead, mix, and roll dough were powered by the steam engine. One was entirely new: the world’s first device to inject jelly filling into pies and cakes. It cost $5,000 and, with its six operators, could do the work of 150 workers by hand. Bakers from around the country came to see the apparatus first hand in 1890.

In addition to being an astute businessman, Keebler was active in the city’s civic and charitable organizations, especially its German-based societies and festivals.

Keebler had many business partners through the years. His last was Augustus Weyl, who partnered with the company in 1890. Weyl was also a German immigrant and baker by trade. They incorporated Keebler’s bakery as the Keebler-Weyl Baking Company with Keebler as president. This partnership was said to have lasted into the 1960s long after the two principles had passed away.

Keebler died at age 71 at his home at 643 North 22nd Street in 1893. In his relatively short life, Keebler was married three times and had at least eight children. He was buried at Mount Peace Cemetery, an Odd Fellows cemetery at 3111 West Lehigh Avenue not far from Laurel Hill Cemetery.

Hales & Ballinger designed a major expansion of the 22nd and Vine Streets plant in 1901, turning the Keebler-Weyl bakery from an assemblage of individual buildings on different lots into a full-fledged, five-story factory. It became one of the largest and best equipped in the United States, with all its machinery powered by electricity. Over 360 varieties of cakes, crackers, and cookies were made there. Plus, Keebler-Weyl developed new packaging methods. The company’s “Aertite” process was widely touted. 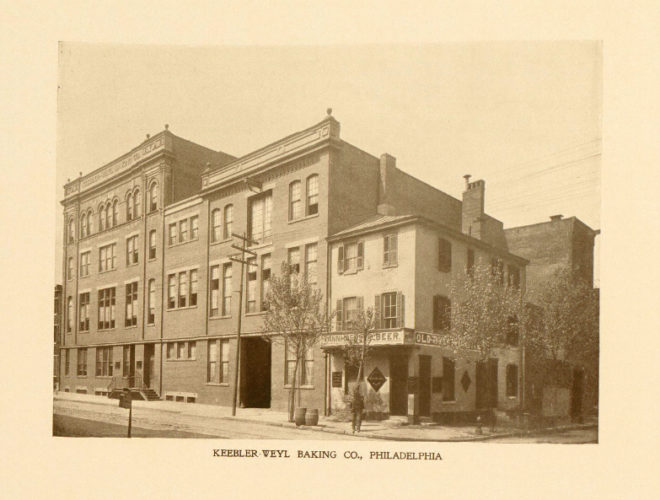 The Keebler-Weyl Baking Company plant at 22nd and Vine Streets in 1905. | Image courtesy of the Athenaeum of Philadelphia

Keebler-Weyl Baking Company was the first member of a network of local bakeries that later was amalgamated under the Keebler corporate umbrella. The other constituent bakeries later opened in other neighborhoods operating under various names. The affiliated bakeries came under the control of a single corporate entity when the United Biscuit Company of America was formed in 1927. A fleet of trucks enabled the local bakeries to develop into regional bakeries and provided a territory-widening distribution system. By 1944, the network of affiliates was comprised of 16 cardinal bakeries stretching from Philadelphia to Salt Lake City.

Plans for the Ben Franklin Parkway had threatened much of the 22nd and Vine Streets site by the late 1920s. In 1931, Keebler-Weyl announce plans to build a large plant at Henry Avenue near Allegheny Avenue. In 1932, Mayor J. Hampton Moore declared that this proposed development was “the first tangible sign of a renewed activity in industrial Philadelphia,” after a period of no growth due to the Great Depression. By 1936, Turner Construction was set to build the new plant. Yet, the factory appears to have never materialized, at least not in full. Keebler-Weyl sold the site in 1939.

In 1938, the firm moved to an immense new baking complex on the southwest corner of Hunting Park Avenue and G Street. For decades, the sprawling factory in Juniata employed hundreds of workers and was serviced by Pennsylvania Railroad. It concentrated on producing chocolate chip cookies and toasted snack crackers. A Keebler Elf sign hung at that location until the mid-1970s, a time when the plant employed over 1,000 workers. 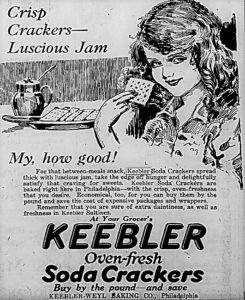 The Keebler Company had much to do with the first organized Girl Scout cookie-selling efforts across the country. On November 11, 1932, a group of local Girl Scouts persuaded the Philadelphia Gas Company and the Philadelphia Electric Company to allow them to bake, display, and sell shortbread cookies in company ovens on the first floor of the UGI Building at the northwest corner of Broad and Arch Streets. The ornate Renaissance-style edifice, now known as One City Plaza, was enlarged toward the west between 1926 and 1927 and is now twice as wide as when built in 1898.

Passerby on Arch Street were enticed by the smell and begged to buy the cookies. This happened again the following year. In 1934, the president of the Girl Scouts of Greater Philadelphia Council approached the Keebler Company, which agreed to bake and package vanilla Girl Scout Cookies in the trefoil shape. This was the first council-wide sale of commercially baked and packaged Girl Scout Cookies in the U.S. Impressed by Philadelphia’s success, other nearby councils soon asked to be included in the bakery orders. Keebler-Weyl was the first commercial company to bake the cookies and became the official baker of Girl Scout Cookies.

The cookie program was so profitable that it went national in 1936. The organization contracted Keebler to make sure that Girl Scout cookies could be found in every nook and cranny of U.S.. Today, trefoil shortbread cookies are still sold by Girl Scouts. Little Brownie Bakers is the Keebler division still licensed to produce the cookies. In 2001, the Girl Scouts unveiled a historical marker at the spot where they first displayed their wares in 1932. A few blocks away, at Broad and Callowhill Streets, a Philadelphia Mural Arts mural was dedicated to the Girl Scouts of America in 2007.

It was yet another blow to the Philadelphia economy when Keebler’s industrial complex in Juniata closed in 1985 and its 420 remaining employees lost their jobs. The 360,000-square-foot factory was Keebler’s oldest and least efficient at the time. The site is now a shopping center.

The Keebler-Weyl Company’s formation in 1890 was the start of a very long and convoluted corporate history. The firm grew to become the second largest cookie and cracker manufacturer in the United States. By the 1960s, the company was known as the Keebler Biscuit Company, a division of United Biscuit Company of America. In 1966, United Biscuit decided to adopt a uniform brand name and chose Keebler as the national brand for all the company’s products, as well as the name of the parent corporatation itself. Two years later, an advertising agency created the Keebler Elves and the Keebler tree logo that represented the tree in which the elves resided and worked to create “Uncommonly Good” Keebler snacks. Ernie Keebler became head elf in 1970. 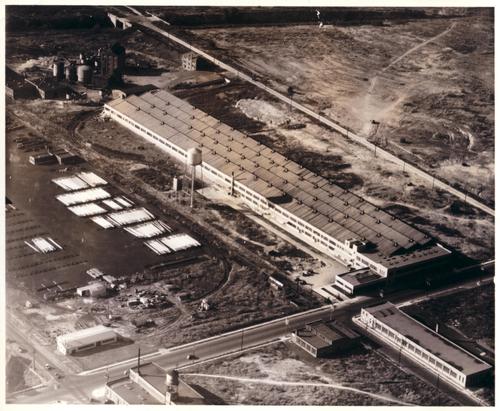 The then-new Keebler-Weyl factory at Hunting Park Avenue and G Street in 1938. | Image courtesy of the Hagley Museum & Library

The conglomerated Keebler company remained independent until 1974 when it was acquired for $53 million by United Biscuit P.L.C., one of the largest food manufacturers in the United Kingdom. In 1995, United Biscuit sold Keebler to Inflo Holdings, a joint venture between Flowers Industries and private equity firm Artal Luxembourg, for $500 million. In March 2001, Keebler Foods Company was acquired by Kellogg Company for about $3.6 billion. Now headquartered in Battle Creek, Michigan, original Keebler brands include Club Crackers, Chips Deluxe, Pecan Sandies, Cheez-It snack crackers, and Zesta Saltines.

In 2000 was about the time when the giant red letters of “NABISCO” were removed from the nine-story Nabisco plant in Northeast Philly and replaced with a smaller sign reading “KRAFT.” Kraft Foods split then, making the snack-food business a separate company called Mondelēz International. Nabisco nowadays is merely a brand name. The Roosevelt Boulevard factory closed a number of years ago, by then rundown, outdated, and entirely lost in corporate shenanigans. The shooting deaths of two workers by another at the factory in 2010 surely did not help the situation. The plant’s closure was a sad event in the history of Northeast Philadelphia, comparable to the 1994 implosion of the Sears Building miles away along the Boulevard.